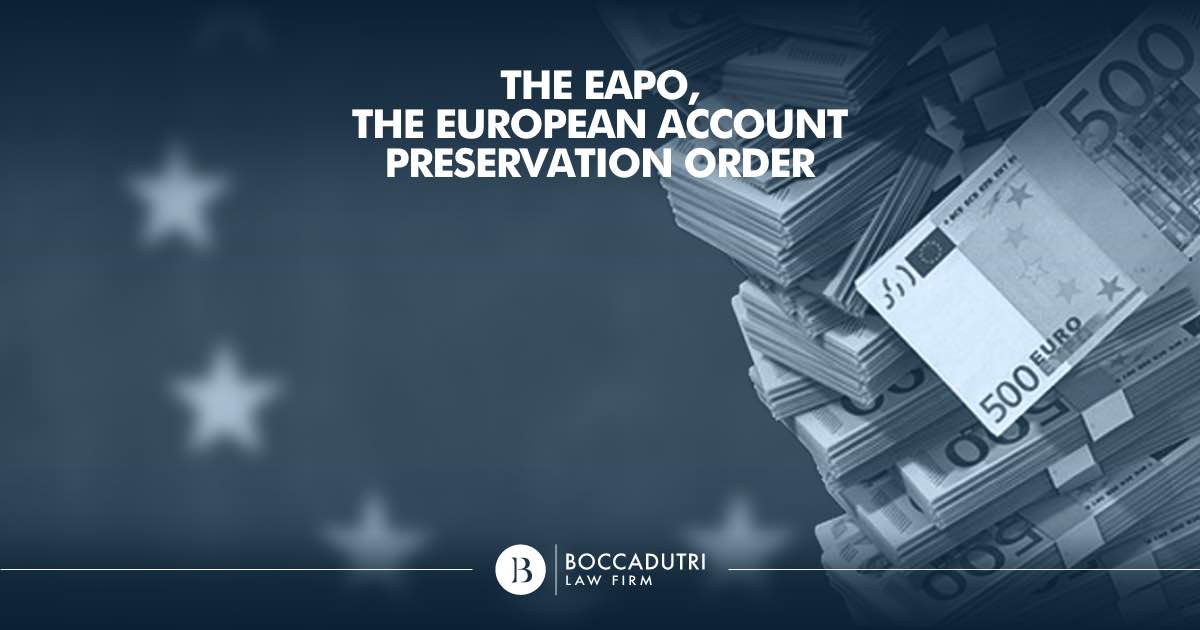 The APO is becoming European.

EU ruling 655/2014 allows the issuing of a European Account Preservation Order (EAPO) on bank accounts in case there is the valid suspicion that the debtor might get rid of the money before arriving in court.

European ruling 655/2014, an EU deed for judicial cooperation, came into action on the 18th of January 2017, and sets out a cross-border procedure for the European Account Preservation Order for bank accounts, with the aim of facilitating the recovery of commercial and civil credit abroad.

The aim of the ruling is to allow those that have accrued credit with people living in another European country that subscribes to the initiative, to ask for an urgent preservation order.

Once frozen, the bank accounts should not be cancelled whilst the judicial authority’s decision is pending.

The EAPO relies on the “surprise factor” since the debtor, kept in the dark throughout the procedure, can neither be opposed to it, nor can they rush to hide the goods available for seizure.

The United Kingdom, even before leaving the European Union, had decided not to ratify EU ruling 655/2014, such that, regardless of the timing of Brexit, it will not be applied in the country, in the same way that Denmark has remained outside the union.

Turning to the preservation order can be an additional option, further to measures already set out by the laws in every state, and constitutes a valid alternative, even if completing an EAPO application and a national request at the same time cannot be ruled out.

In Italy, a credit-holder has the right to request this preservation order based on the code for the civil procedure, articles 2905 cc and 671 ss cpc.

The EAPO may be requested, even before procedures are brought against someone, provided that the person in question is resident in a state that has ratified the EU ruling 655/2014. The request may also be made if the practice is already in an advanced phase or awaiting judgement.

Whilst cross-border and national measures may be combined, it is in fact prohibited to send more than one application for EAPO against the same person for the same credit.

Why turn to the EAPO

The EAPO guarantees discretion and quick action to those that place their trust in them, but in order for a judge to rule in favour of a cross-border preservative order, the one holding the credit must demonstrate that the situation requires urgent action.

It has been shown that without preventative measures, the credit holder could risk never seeing a penny from the debtor living abroad since they could easily conceal their property.

It is up to the creditor to provide the burden of proof, because the debtor will be made aware of the seizure only by order from the judicial authority.

Supporting evidence for the necessity of intervention could be, for example, anomalous bank activity that is out of the ordinary.

The time period for the EAPO

Once the request for the conservative seizure has been received, the judicial authorities have up to a maximum of ten working days to decide whether to authorise the procedure or not.

In case the credit holder has already got a favourable judicial decision or is in possession of some public act that obliges the debtor to pay, the number of days within which the seizure must be authorised goes down to five.

In some situations in which it is necessary to listen to witnesses, the deadline could be extended slightly.

Which goods may be seized

In order to proceed with EAPO the debtor’s foreign current accounts need to be identified because it is these that the eventual seizure would affect.

Bank payments made up of only shares or bonds are excluded from cross-border seizures. Only cash, of any currency, can be accepted.

The set of forms relating to ruling 655/2014 presents various complexities, due to the delicate situation linked to the subject.

Lawyers from Boccadutri International Law Firm are completely available to you to guide you through the available solutions that are offered for those who have credit with residents abroad.

To contact our lawyers, please fill out our application form here.