Crimes that can be prosecuted on a partisan complaint: change 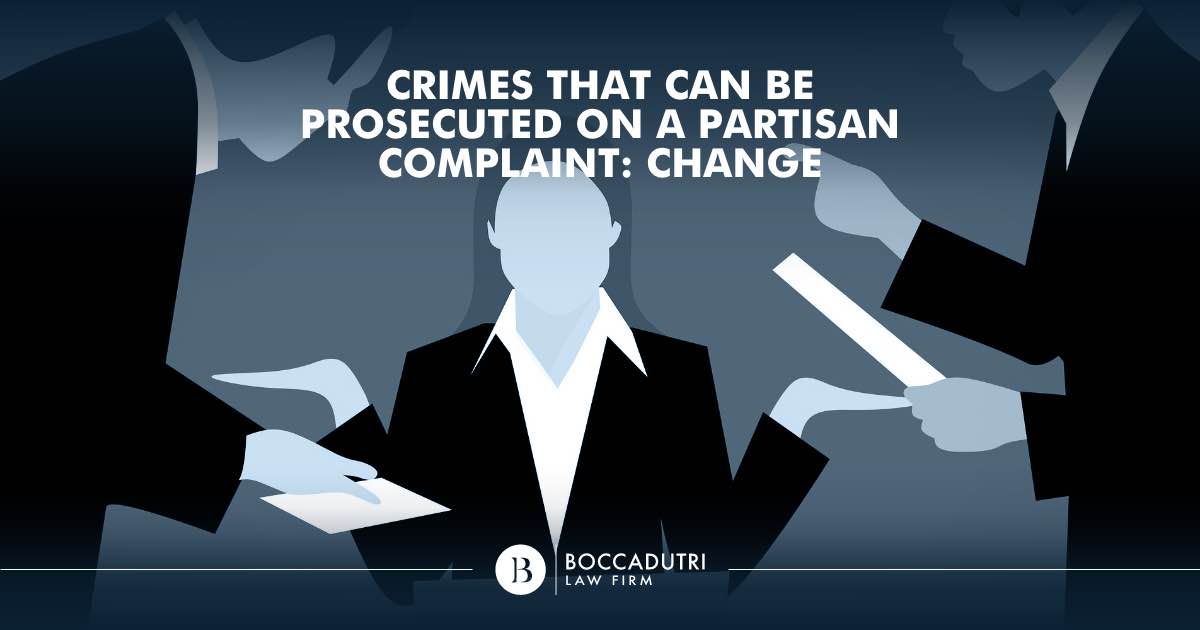 Opening the scope on offenses that can be prosecuted on partisan complaint, Legislative decree no. 36 has extended the ability to prosecute in crimes against person and property.

Increased to the offenses that can be prosecuted on complaint of part following the entry into force of the legislative decree number 36 dated 10 April 2018.

From May 9th of last year, the number of the crimes that can be prosecuted on the partisan complaint was extended; by Legislative Decree. n. 36/2018 concerning “Provisions for amendments to the rules governing the procedure for certain crimes implementing the delegation pursuant to art. paragraph 16, lett. a) and b) and 17, of the law 23 June 2017, n.103 “.

With the aforementioned decree, which consists of 13 articles, offenses can be prosecuted on complaint for which the initiation of criminal proceedings will depend on if the victim requests prosecute the perpetrators of the crime.

The institute of prosecution on a partisan complaint extends to a list of cases of offenses against the person punished with a single monetary penalty or with an imprisonment sentence not exceeding four years (with the exception violent crimes, as per Article 610 of the Criminal Code.

The legislative decree refers to the crime of threat, violation of residence committed by a public official: falsification, alteration or suppression of the communications including telegraphic or telephone conversations and computer or telematic. This definition extends to the violation, subtraction and deletion of correspondence committed by a person in charge of postal services, telegraphs or telephones.

For the cases listed above, they are, however, some exceptions. Therefore, expanding the sphere of crimes for which criminal proceedings will be prosecuted following complaint by the victim, and whilst simultaneously reducing the sphere of offenses that can be prosecuted ex officio (by virtue of one’s position or status).

The objective of the reform of the Penal Code and of criminal procedure is to “improve the efficiency of the penal system, favoring mechanisms of conciliation for minor offenses, including through the operation of the institution of extinction of the offense for reparatory conduct” explains the Council of Ministers.

When the punishment of the guilty party is of interest only to the victim, in the event that the offense has not impacted any third party, the interest of the victim is considered during the prosecution. Without the manifestation of this act, the State renounces the punitive claim, streamlining and lightening the workload on magistrates.

It should also be emphasized that with this reform, reconciliation tools will be utilized and improved.

Crimes against the victim

Article 623 is introduced to the Criminal Code in the aim of maintaining the ex officio prosecution for crimes against a victim in the event that aggravating circumstances occur.

This means that threats aggravated with the purpose of terrorism, organized crime and subversion or those which are aggravated by racial, ethnic and religious discrimination can not be prosecuted.

The offenses taken into consideration by the new provisions of the law are those as follows:

On the subject of property crimes, the number of aggravating circumstances that lead to the prosecution of office has been reduced:

The importance of the victim

Those who report a crime will be called to give testimony of the offense, thus activating possible mechanisms of conciliation at the beginning of the trial, and avoiding unnecessary delays.

By entering into force the legislative decree 36/2018, for the crimes that have been committed before May 9th, and whose proceedings are already underway, it is up to the public prosecutor, if still in the preliminary investigation phase, or to the judge, to inform the victim of the new possibility for them to exercise the right of complaint, with effect from the day on which it was informed.

The case is different in that the trials are pending before the Court of Cassation, because in this case the new provisions of the law will be difficult to apply.

In light of this reform, for any necessary clarification, the Boccadutri International Law Firm is, as always, at your disposal through our dedicated team of the Department of Criminal Law. For any further information, do not hesitate to contact us.