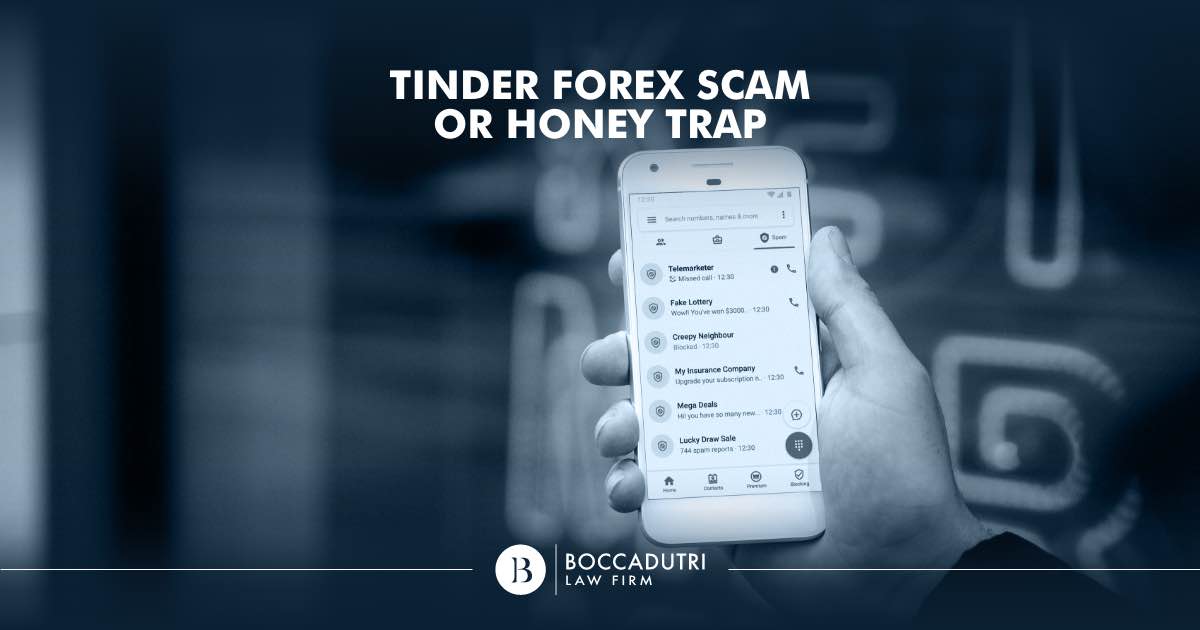 The Tinder Forex scam involves signing up to a dating app and finding people willing to invest in deceptive products designed to make one lose all their money. This is after gleaning one’s confidence and trust.

It is called the Tinder Forex Scam because it is developed in dating app chats. It is treacherous, compared to other scams, because it strikes both a private and personal chord.

If it has not been clear up until now, this type of scam shows that scammers can leverage all of our weaknesses, manipulate every aspect of our lives, and attack us even when we are most vulnerable.

What are Dating Apps?

Dating applications are apps that connect people looking for potential partners. Tinder, for example, is active in 140 countries and has been downloaded by more than 100 million people.

However, it is not the only dating app used by scammers looking for prey. In theory, a dating app allows you to choose someone, from anywhere in the world, you are compatible with and puts you in a position to get to know one another. In fact, it must be said that it has worked for many.

Unfortunately, for those with bad intentions, the purpose of any such tool is to make easy money.

How the Scam Develops

The scammer acts like any person on Tinder would, responding to messages and phone calls, sending photos and videos, presenting themselves as available and affable. In other words, they seem to have a sincere interest in the targeted person. It actually seems like a very normal connection that deserves to be deepened; also, because it is never vulgar or unpleasant.

The scammer usually portrays themselves as a good-looking and successful person who is ready to share the secrets of considerable wealth with their new “friend.” To complete the package is this affinity with someone who has knowledge of financial secrets.

As time passes, one’s normal defenses lower, laying the path for – from the onset – the real goal: to convince people to invest in a product designed to steal their money.

The scammer does not insist. Perhaps they make a proposal, but then they will not talk about it again until another occasion. The aim is to intrigue and make the targeted person curious, in a gentle way, by proposing an irresistible deal but leaving them free to choose whether to take advantage of it or not. Until the targeted person finds no valid objections to refuse.

As is the case of normal online dating, you do not know who is really hiding behind a profile. You do not even know if it is a man or a woman. Not only could they be of a different gender to what they claim, it could be a profile run by a group of people. Even if they are who they say they are, they might not be telling the truth about themselves.

Most scammed persons speak about (supposedly) beautiful Chinese women surrounded by cars and luxury items. They are probably not women nor Chinese, but evidently, in the collective imagination, a beautiful and successful Asian woman attracts attention and inspires confidence. Among other things, as businesswomen, who constantly travel, they can avoid, with plausible excuses, the logical request for video chats by the interlocutors.

But it is not only men who have been targeted by scammers. Women have also been targeted through profiles of interesting and charming men, which have the sole purpose of inducing one to make incautious investments.

Various ways of doing so have emerged from testimonies.

First of all, the interest in Forex investments is stimulated. When a victim is willing to trade, but has no experience, the scammer offers to let them practice on a demo account. Demo trading accounts allow people to invest virtual money in an environment with real-time commodity prices and currency movements. Undoubtedly, the broker who runs the account is specifically selected.

The brokers are in fact part of the scam and have a fake Forex server running that they can manipulate as they wish.

The victims are guided through everything by the interlocutor and all payments, with subsequent checks on the performance of the investment, are made together.

On the other hand, those who have already invested are instead diverted directly to the expert, the same “expert” who supposedly made the “friend” rich, to speak straight to them.

At this point, one would receive an IBAN to which one would deposit money to invest.

One would hardly be told to write the real reason for the investment to avoid controls by the bank.

The most careful scammers create a site, or an app, and operate the server so that everything looks the way they want it to.

One would then see the money paid in vary in price as predicted by a relative or by the well-informed, expert friend. In a short time, it would appear that the money paid in has made thousands of dollars; but none of it is real.

Looking at it from the outside in, the scam is obvious, but the illusion that the scammer manages to create cannot be understood if you are not involved.

An experienced investor would probably immediately recognize the deception, but it is also true that if a scammer realized that they were dealing with an expert, they would move on.

The task of convincing someone is not only what you say, but also what you make them understand. If I flaunt a high standard of living and reveal that it is the result of a series of investments, aided by the advice of a relative who is well placed in such a context where it is easy to receive news in advance, why should I not tell my new friend on Tinder? After all, if they also invested, it would not take anything away from me.

In fact, these days you learn to get to know a person by talking about their interests: food, politics, cinema, the world pandemic, travel, work, and even investments.

Ultimately, victims of Ponzi schemes are often involved by friends and relatives in scams. Before giving away money lightly, one should pause to think, is the investment too convenient to be true? Is it true, or is it a scam?

The Catfish phenomenon is not new. They are people who, either for low self-esteem or for clear disloyal intent, create a false identity on the Internet, portraying themselves through photos and information that do not belong to them.

“Fake personas” are not hard to come across on social networks or dating apps. As long as their intent is not criminal, their actions may find justification, or they are left to their own devices.

There are those who create fake profiles to spy on someone, out of fear of showing themselves as they truly are, to offend (a practice that often results in a crime), and then there are the scammers who have made a profession out of the interpretation of “other than oneself.” These types of scammers can be found everywhere, ready to exploit a lapse in attention to steal money and information.

On dating sites, these scammers make you believe that they have, thanks to a relative or a trusted manager who works there, exclusive information on a certain investment. Often it is a new cryptocurrency, the value of which, according to them, is bound to rise.

Only that this information is not in the public domain, so the few investors who manage to seize the moment will earn exorbitant amounts of money. Needless to say, sponsored cryptocurrencies do not exist, and any money invested will end up in the pockets of scammers.

These are not isolated cases. Reports are increasing and it is important that people know about this new form of scamming.

Scammers must be reported in order to have even the slightest chance of recovering swindled money and to save future possible victims.

Even if, thanks to word of mouth, this kind of scam is being widely echoed in forums, there are already many people who have lost tens of thousands of dollars by trusting the advice of a social acquaintance.

The question is, is it possible to get your money back? Unfortunately, if the money has been sent to tax havens, it will be difficult to get it back. In addition, it may be difficult to recover deposits made to a particular banking system where there is no provision for returning money paid.

A lawsuit, and in any case legal assistance from a lawyer experienced in Forex scams, may be the only possible resource to ask the scammer’s banks to return the swindled money.

If you realize that you have experienced something similar, talk to us about it and we will advise you on the best course of action to take to try to recover your money, at least in part. The Forex Litigation Department of Boccadutri International Law Firm has already received several reports from clients who have dealt with Tinder scammers and is following up their cases successfully.