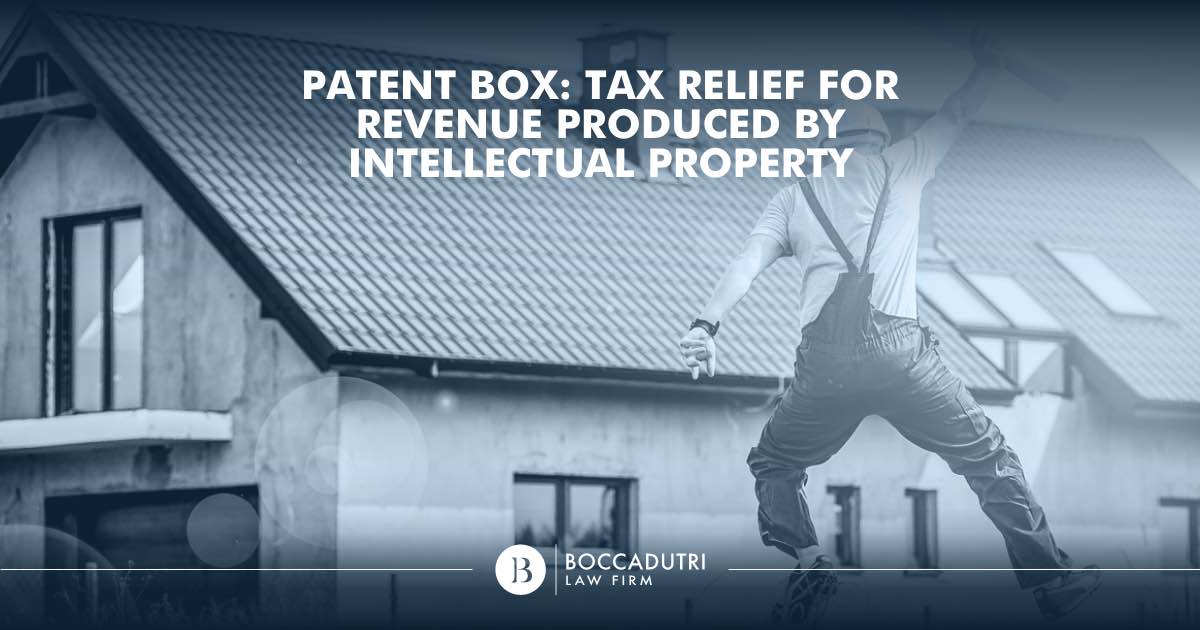 Ask a question about Intellectual Property

The Law of Stability was introduced in 2015 in Italy, the c.d. Patent Box.
Act 1, from subsection 37 to section 45 from the Law of Stability 2015 (Law n.190/2014) introduced as a new alternative to our system, known as “Patent Box.”
It concerns a fiscal system of tax relief, as a result of which all income holders involved in the business of intellectual property can benifit; patents, brands, designs and modules, as well as formulas and relative information acquired in the field of industry, business or science that are legally protected (know how).

The principal objective of this system of relief encourages business investment in the reasearch and development processes. It was then subject to change, it is the work of the D.Ln.3/2015 from the Law of Stability 2016 (law no. 208/2015) while the implementation of provisions of regulation were issued by decree from the ministry of Economic Development on the 30th July 2015.

Let us now look at the principal characteristics of the regime in the way that (i) entities can access relief, (ii) the scope of application and the tax mecchanism; (iii) the process and the duration of this alternative system.

All those who earn a business revenue can be part of this option, independent from the type of chosen accounting options. and from legal official categories (entrepreneurs, individuals, coorperations, S.p.a., S.a.p.a., S.r.l.), partnership (S.n.c., S.a.s), cooperatives, mutual insurance societies, public entities and individuals that are involved in commerce, as a result of their assets.

And instead it is necessary that such entities carry out research and development of their creation, the maintenance and development of intellectual property.
Be it internally managed or through research contracts with different business from which they directly or indirectly control the business.
It could be managed by the university or entites research entities and similar establishments.

Companies as well as other entities can accept even if the entity is not based in Italy, as long as the company is based in a company where (i) there is an agreement in force to avoid double taxation, (ii) with companies with whom the exchange of information is effective.

However, if they are failed companies, in compulsary liquidation, and the companies subject to remarkable administrative procedure from big companies in crisis they are excluded from the alternative system.
Furthermore, self-employed workers and entities that determine revenue according to a fixed revenue are excluded.

How does tax relief work

As already alluded to tax relief is applicable to revenue derived directly or indirectly from the use of use of (i) software protected by copyright; (ii) industrial patents; (iii) trademarks (registered or in the course of being registered); (iv) legally protected designs and model; (v) proccesses, formula and relative information and acquired experience in the industry field, businesss or scientific that is legally protected.

To be able to quantify exactly the tax relief conceeded, it is necesary to determine
if you want the subsequent costs to be attributed to the creation, the maintenance/the enhancement and the development of intellectual property.
It concerns, the operations that require both legal skills (the identification of intellectual property and the way in which tit is used etc.) and tax expertise (in determing the revenue and the tax relief etc.).

The process, the duration and effect of the alternative system

The alternative system has to be carried out by declaring the relative salaries from the first tax period which one has to decide upon is valid for five tax periods, it is irrevocale and renewable.

For the first two tax successive tax periods, those from the 31st December 2014, so for the years 2015-2016, the companies have to send the option electronically, using the appropriate model, indicating the personal dates and the year from which the system starts; the alternative regarding the tax period that is agreed and the next four successive periods.

Yet from 2017 the alternative system will be able to be carried out by declaration the revenue (using for 2017, l’Unico 2018) and starts from the tax period to which the same statement refers.

Using the alternative system is pertinent, for the delcariong of the total revenue for the purposes of IRES and IRPEF, nad in order to determine the value of production of IRAP.

Such a system has the function of rendering the Italian market much more attractive in the long term for Italian investors and investors from abroad, protecting at the same time the Italian tax base, since:

The system poses itself in line with the progressive models introduced in other member states of the European Community (Beligum, France, Great Britain, Luxemburg, the Netherlands, Spain) and conforms to the principals processed in the scope of OCSE with reference to the tax displine for taxation of the revenue used from the intellectual property.

To contact a lawyer from our law firm, request a legal consultation here.