Voluntary Disclosure: the deadline is getting closer 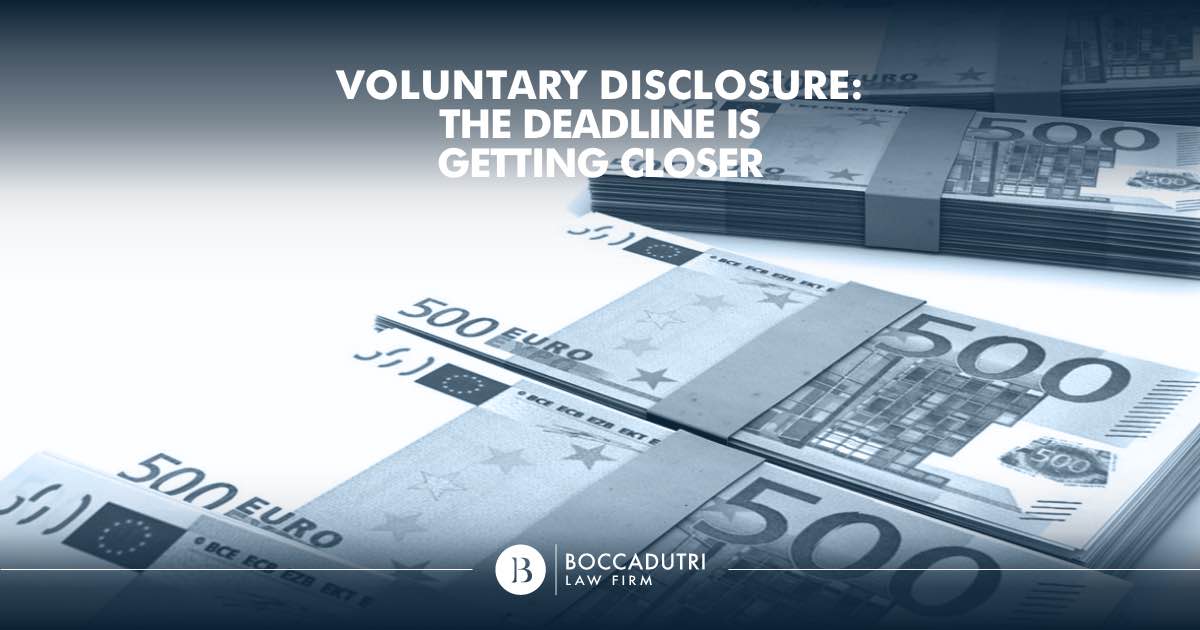 Ask a question about Tax

The new voluntary disclosure, launched by the Italian government allows regulation of your debt situation with the Italian State.

You still have until the 31 July to subscribe to the Voluntary Disclosure bis, the process for the re-entry of capital held abroad and for the annulment of undeclared income.

After what ended up happening in 2016 (Fiscal Declaration 193/2016) the government tried again, even offering the possibility to those who had already signed up to the Voluntary disclosure of 2016, to make a request for the emergence of further irregularities in Italy, this time excluding foreign capital.

The changes compared to the first Voluntary Disclosure

This means renewal of the Voluntary Disclosure 2.0, consenting to the self-declaration of capital, of lawful origin, held in Italy.

The IRPEF, IVA and additional regional tax will regulate declarations on productive activities.

Those that subscribe to it may pay into the state coffers the missed payment of taxes and interest, taking advantage of a discount on sanctions and arrears and, importantly, a legal condemnation of crimes related to the missed payment (with due exceptions). Interest on the amount not paid will be determined by applying subsidised rates.

The new Voluntary Disclosure exclusively deals with violations committed by the 30th September 2016.

The law and amendments

In Italy, to encourage the return of capital hidden abroad, law 186/2014 was created, in which Voluntary Disclosure was mentioned for the first time.

After the reopening of terms, the government is considering corrective action, contained in the amendments, which could concern, retroactively, the first version of the ruling as well. What will be under scrutiny is the decrease of sanctions for those that carry out payments while also having wrongly calculated how much was owed, bearing in mind that the entire tally is made by the contributor, for which they are responsible, especially if they do not use the support of professionals.

Always reaching out to contributors, the 10% and 30% increases forecast for those who pay late or who pay less than is owed, and can use discounts on the sanctions applicable to those who pay the sums owed in the terms and in an exact way would not be calculated on the full amount that the debtor owes. Out of the amendments proposed to which, for those who subscribe to the return of capital, would mean the subtraction of the taxes already paid abroad from those that are to be paid in Italy.

If, for the first Voluntary Disclosure it were up to the Tax Office to calculate how much was to be paid, this year, a self-taxation model would be brought in, with consequent sanctions for those who pay less or for those who end up not paying.

To get your books in order, you can personally arrange the calculation and payment of the amount due. The Voluntary Disclosure model 2017 is available on the Tax Office’s online platform.

It is important to know that the estimation for the exact amount to be transferred is not by any means linear considering that both sanctions and discounts are added up.

The application filled out by the contributor or by qualified intermediaries may be put forward until the 31st July 2017.

The results of the first Voluntary Disclosure

The first Voluntary Disclosure helped around sixty billion euros to be recovered from abroad, but the expectations linked to the new measures that aim to make up the one hundred and seventy billion that the Bank of Italy estimates could still be “hidden”. It may be important to take advantage of this opportunity before the transparency imposed on bank institutions in Italy and abroad may lead to recognition of the concealed revenue.

If you are in any way interested and need a professional to assist you during the emergence process, do not hesitate to contact our expert lawyers.

Fill in the application form here.