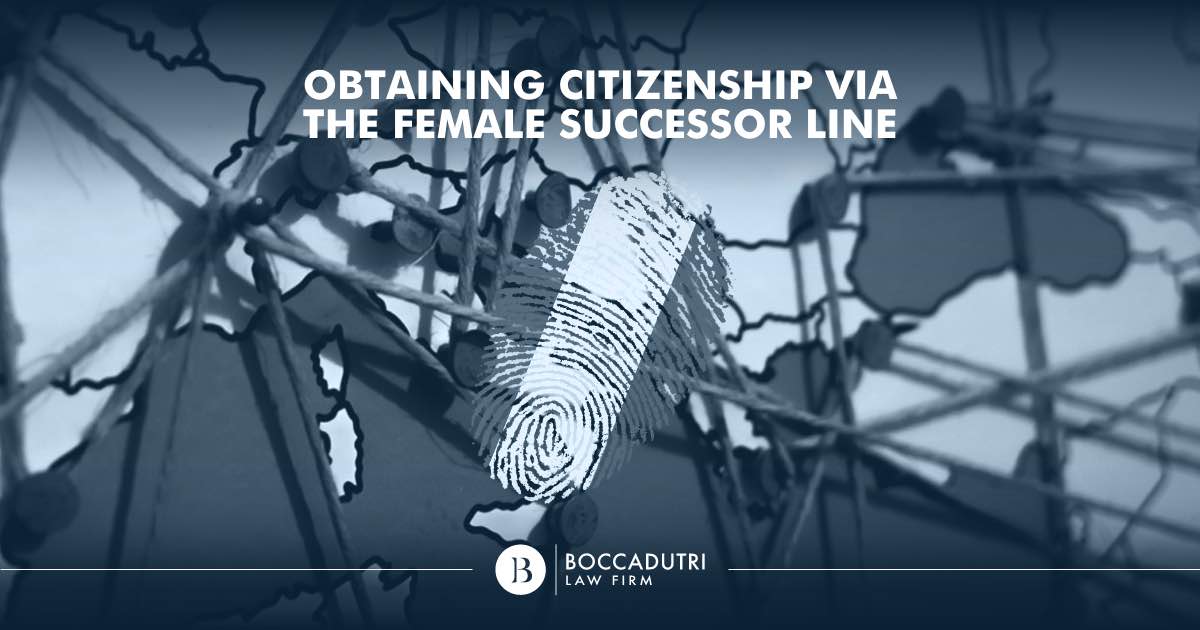 Can a law established before the constitution be unconstituional?
In 1912, when legislation on citizenship was drafted in Italy regarding the tranfering of citizenship from parents to children, it maintained a distinction between the transfering of citizenship through paternal and maternal succesor lines.
The phenomenon of emigration happened en masse and so many Italian women ended up marrying foreigners. These women acquired their husbands’ nationality and so relinquished the right to transfer Italian citiznehsip to their children.

Although most part of our emigrants have not explicitly renounced their origins, according to the law of 1912 marriage with a foreigner erased their Italian roots.

The constituion, valid from the first of Janurary 1948, has restored the posibility for those Italians who moved abroad and married foreigners of not cutting all ties with Italy.
Thus they were able to transfer their Italian citizenship to their descendents. However, what resulted was that only those born after the constituion were able to obtain recognition of their citizenship being able to be transferred in a simple linear fashion, by means of iure sanguinis. They could do this through a request to the consulate if resident abroad, or by means of the mayor, if they were Italian residents.

The situation is quite different for those of whom the female Italian successor line began before 1948, because Italian citizenship can only be obtained via judicial action.

In practice one is obliged to turn to the judge in cases of transferring citizenship, if a descendent of an Italian woman born before 1948 is present.

Yet, in many countries citizenship is not automatically transferred to a foreign wife through marriage. Therefore, the women in question have never lost their status as Italian citizens, the law however does not take this into account. This leaves judicial sentences to establish who has the right in each individual case to Italian citizenship in the presence of a female ancestor.

It just so happens that two brothers born one after the other in 1948, had different outcomes regarding the recognition of Italian citizenship. They were at different times, but the outcome risks being different, given the undpredicatability of the verdict in the absence of a clear and unequivocal law. According to Italian law these two brothers cease to have the same rights.

Law no. 555 of 1912, continues to discriminate against Italian women and their descendents that have chosen to move abroad. According to this rule the son or daughter of a mother with Italian citizenship does not have to be recognised as an Italian citizen if the son or daughter’s father is a foreign citizen.
But this does not occur in all foreign states, the marriage act does not function as an extension of the wife’s citizenship, which the court does not always take into account.
If citizenship is not lost through marriage, Italian women who have not requested citizenship of the husband’s country, have remained citizens of our country.
The law of 1912 has also created problems for women that have had children with foreigners to whom they are not married.

The law n.151 of 1975, recognises Italian women’s right to citizenship, which they have lost independent of their own doing, by way of marriage to a foreign citizen before the first of January 1948.

In 1983 the law 123 ratified that a minor of an Italian mother or father will be seen as an Italian citizen.

In spite of the court of Cassazione declaring itself in favour on multiple occassions of the policy of an individual obtaining citizenship through means of an Italian ancestor born before 1948,in practice this is not the case with the public administration.

The public addministration has not adapted to the new situation and continues to uphold the belief that an Italian mother only has the ability to transfer her citizenship to her children after the consitution came into force.

Law 91 of 1992, has not had a retrospective effect, therefore there is always need for a sentence to enforce the right to Italian citizenship for those descended from a woman born before 1948 and had married a foreigner.

The Constitutional Court’s verdicts for the most part have agreed with the notion of the invalidty of the law 555/1912. In 1975 with sentence number 87, and in 1983 with sentence number 30, the previous court first contested the validity of the law of 1912 at the point at which it considered the marriage to a foreigner to automatically remove the Italian women’s citizenship of origin.
As a result, there followed discrimination towards the children of a mother with Italian citizenship, but not towards the children with fathers who have Italian citizenship.

In 2009 the court of Cassazione, with the sentence of the Chambers of 4466, attribuited a valid retrospectve judgement for both verdicts of the Constituional Court.
It recognised the legitimate children from an Italian mother born before the first of January 1948 as Italian citizens by means of iure sanguinis.

What has emerged from the majoirty of sentences is that individuals can be recognised as Italian citizens if they have Italian ancestors that have never renounced their Italian citizenship, regardless if the ancestor was a man or woman.

Those who want to assert a claim for their Italian ancestry, having had an ancestor move abroad, can do so in an Italian court, one does not necessarily have to do it in person. An advocate can represent your appliation in court.

In cases with a postive outcome, the advocate will notify the Minister of Internal Affairs and the Revenue Agency with the verdict.

It will then be up to the client to inform the Italian Consulate of the country where they reside, in order that one can request a copy of the citizneship document from the state’s citizenship office at the place of birth of the Italian ancester. One cam then ask to be reigstered in the Italian Registration Office for Italian citizens abroad, (AIRE) in order to acquire an Italian passport.

The lawyers at Boccadutri law firm, are experts in Immigration Law and garantee legal assistence.
The lawyers are a competent authority in these matters. They will aid your case and do the utmost to obtain recognition of your Italian citizenship status by means of iure sanguinis via the maternal line.