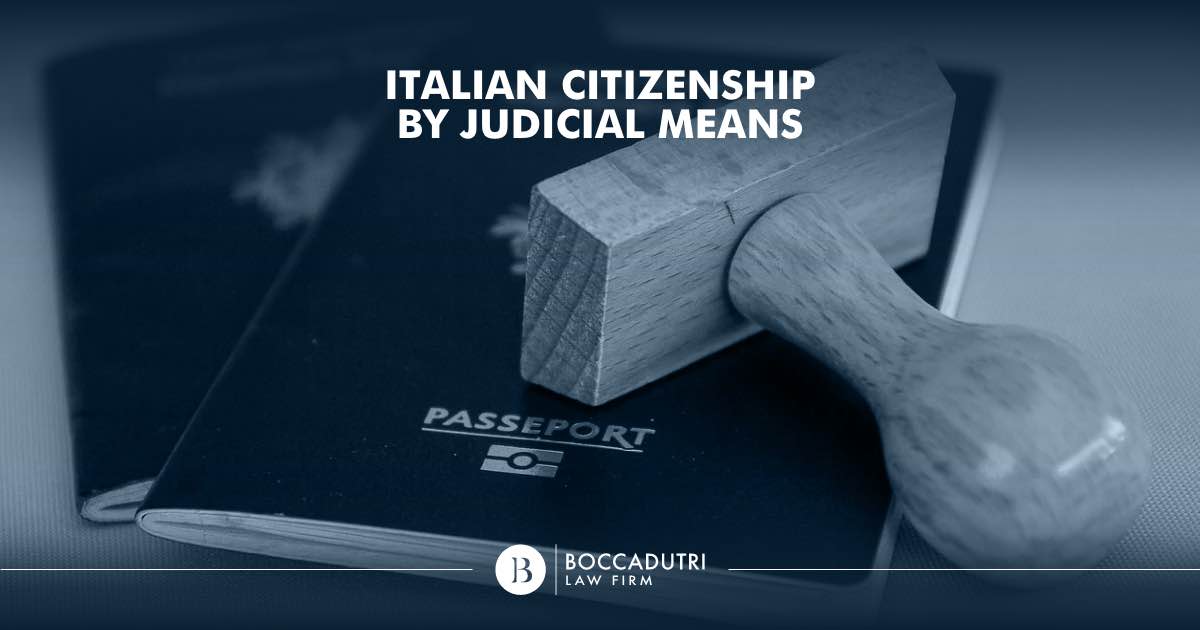 The time is being lengthened to obtain Italian citizenship by judicial means, and how to carry on if citizenship efforts are already underway.

Italian citizenship is obtained through descent or can be acquired in the presence of specific circumstances:

Except in the case in which the ascendants for which recognition is requested are female (read how to obtain citizenship through a female succession line, a situation that obliges the person concerned to take legal action by appealing to the ordinary civil court of Rome), the citizenship applicant, once legitimacy has been acknowledged, has the right to decide whether to wait for the administration’s time or whether to act judicially against the administration.

On November 27, 2018, the Chamber approved bill 840/2018, which makes changes to legislation on security and immigration, without changes to the version already passed in the Senate on November 7th.

If the silence of the State has so far been a point of appeal for various applications of Italian citizenship who have remained in “limbo” for years, the new regulations are likely to eliminate with a swift stroke any residual hope of being recognized as an Italian citizen in reasonable time.

The previous law 91/1992, which demanded resolution of application procedures within a 24 month period, has been violated by the State in countless cases.

After analyzing the waiting time to obtain citizenship, and in relation to the number of applications submitted, the Ministry of the Interior evaluated that the lack of response within the 24 months as caused by the short time available to respond, so he thought well to double it.

By the admission of the same Minister Salvini, the State struggles to dispose of the applications also, and above all, because of the enormous amount of counterfeit documents.

The Decree Law of October 4, 2018, n. 113 concerning “security and immigration”, renamed by the media “The Salvini Decree”, came into force after approval by the Chamber and the subsequent consent of the President of the Republic.

In article 14 the decree indicates in forty-eight months the new period of time in which the Italian State is obliged to respond to those requesting Italian citizenship.

Law 91 of 5 February 1992 had previously set the waiting limit to twenty-four months.

The new decree also applies to “recognition of citizenship procedures initiated by the diplomatic or consular authority, or by the registrar”.

There persist many doubts about the transparency of practices before the new decree was enacted on October 5, 2018.

Following the entry into force of the Salvini Decree, any foreigner who aspires to become an Italian citizen will have to:

Italian citizenship can always be obtained in cases already provided for by law.

In the event where children of foreigners are waiting to obtain citizenship, the risk is that, in the meantime, they will reach the age of majority and lose the right to acquire citizenship automatically.

In addition, something has also changed for those who have already applied and awaited a response or for those who, faced with exceeding the times previously established by law, have been forced to turn to a civil or administrative court to have their rights recognized.

The law expressly provides that the “proceedings in progress” that may be included in the new law decree are those that have not been defined as of 5 October 2018.

There are reports of investigations being reopened and relegated to previous phases, even if they have already been concluded before October 5th. Yet a good number of practices are not anticipated to be subject to the Salvini Decree.

Appeal to the TAR

By averaging between the times hitherto used by the Ministry of the Interior, we are confronted with situations in which 5 years from the date of submission is not long enough for an Italian Citizenship application to be granted or even recognized.

Those who wish to try and claim citizenship before a judge who has the power to issue a decree recognizing citizenship can attempt to do so in lieu of waiting, but acceptance is obviously not guaranteed and the process can be lengthy and consuming.

So far both the TAR (regional administrative court) and the Italian courts have accepted the appeal lodged by foreign citizens against the Ministry of the Interior, and therefore against the Italian State.

However, in the case of an appeal to the Regional Administrative Court it should be remembered that, in the TAR’s powers, it is not the right to grant citizenship but to impose a precise deadline to the Ministry within which the practice must be concluded.

A “historical” sentence (ruling No. 2257) was issued on February 26th, 2014 by the Administrative Court of Lazio, II Section Quater, which validated about fifty foreign nationals, who were united in a class action lawsuit against the Ministry of the Interior.

The judge ascertained a “direct and actual direct infringement of the rights and interests of the appellants resulting from the failure to conclude within the terms of the law of administrative proceedings concerning the granting of citizenship”.
The Ministry was condemned to adopt “every act deemed fit to solve the disruption deduced in a systematic and general manner within a year of the sentence”. What emerged during the proceedings before the Lazio Regional Administrative Court is the habit of the peripheral offices to request superfluous documents or, even worse, the tendency to use obsolete paper models, without relying on more practical and rapid telematic procedures.

Other changes under the Salvini Decree

The Salvini Law Decree has overturned the concept of immigration in Italy, abolishing humanitarian residence permits, in its place special temporary permits will be granted.

Repatriation centres will be obliged to detain migrants for six months in contrast to the previous detention period of three months. The issuing of special permits for civil value is recognized. This special permit allows stay in Italy for two years, is renewable and can be converted into a residence permit for work.

To deserve this recognition it will be necessary to have accomplished heroic deeds, saved lives, collaborated in arrests, or have made a significant contribution to science or to the good of humanity; overall being an example of practice and pride of the country.

Foreigners facing expulsion may be held in public security facilities if there is a lack of room in Centers for Repatriation (CPR) or if they are missing CPR Projects. Integration and social inclusion will be limited to those subject to international protection and unaccompanied minors.

In cases of asylum applications, any convictions at first instance for serious crimes will be taken into account, first of all, homicide and sexual violence, which would lead to their suspension and the probable obligation to leave national territory.

The novelty, compared to the past, is that the number of crimes for which an accused can be considered socially dangerous and, consequently, removed has expanded. The citizenship already obtained will henceforth be subject to revocation in the event of a permanent conviction for terrorism.

Given the delicacy of the topic addressed and the current uncertainty due to the change in progress, the Boccadutri International Law Firm evaluates every single case in its uniqueness, studying the best solution suited to each individual circumstance. For more information on how to obtain Italian citizenship by judicial means, please contact us here.