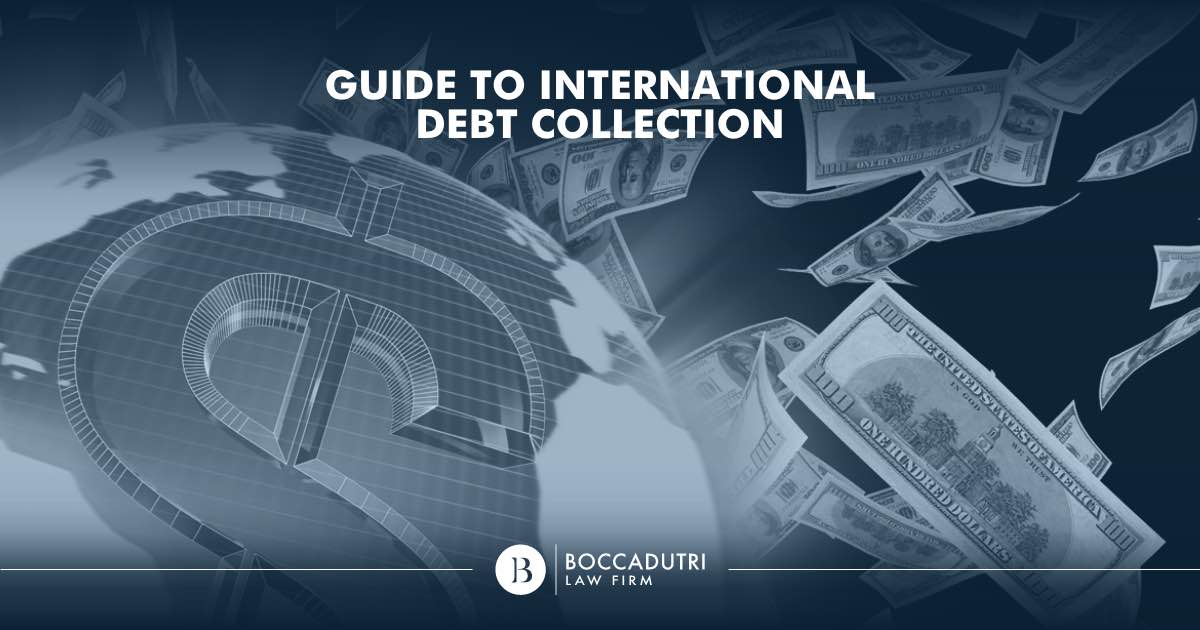 Ask a question about Debt Collection

International laws and regulations regarding the recovering credit exist, but the failure to implement these laws can result in creditors experiencing difficulties. It is possible to recover credit without needing to take legal action.

The result of a high number of transnational transactions is that serious problems can be encountered during the process of recovering money that is owed to you, above all the difficulty of finding information regarding the credit worthiness of the debtor who lives abroad.
Yet, you can protect yourself from these situations by creating contracts, which will aid you when waiting for payments that have not arrived.

For a company receiving what is owed to them is essential to survive and to grow, thus for them it is good to know that, in the absence of clear responses from the part of the debtors who are abroad, one can contact professional support so as to recover the expected sums as soon as possible.

In Europe the 2006 regulation applies n.1896/2006 on the basis of which, the requesting individual, can obtain a payment order, valid and executive in all European countries (except in Denmark).
It is known as the “the European payment injunction procedure”, the measure may be issued by any European court.
This is used to reduce the costs and time of “cross-border controversy regarding non-contested pecuniary credit.”

Creditors can turn to foreign courts

If there is any doubt surrounding the speed or reliability of one’s own national courts, it is good to know that each creditor can appeal to foreign courts to succeed in recovering one’s money.
This solution can be chosen to also avoid the risk of exemptions on the debtor’s part, whilst the case is in process.

Italy is among the signatories of the Convention of the Aia on the 15th June 1995, the law relevant to the international sale of goods, that provides for contracts that are “governed by the law chosen by the parties, as well as the general spirit from the agreement and the circumstances of the case.”
The European Union has throughout its existence established various laws to regulate the relevant law for contracts “with international elements.”
In 1980 the Convention of Rome established standard regulation regarding conflicts in this area.
More recently, Italy joined the regulation council termed “Rome I” regarding the law relevant to the contractual obligations, whilst always respecting European directives (in this case it deals with applying the regulation n.593/2008).
This means that in cases of conflict in this area of contractual obligations, the parties concerned can agree on the relevant law, and indicate this to the court that will be responsible for the controversies.

Even before quantifying the correct waiting period before being paid, in 2008 (directive 2008/52/CE) the member states aimed to encourage the use of mediation, or the means of alternative resolution to justice, in transnational controversies in the field of commercial and civil law.
For Italy, the implementation was of the legislative decree no. 28 was given on the 4th March 2010.

The mediation can be applied to all the commercial transactions, independent from the fact of wether there are public enterprises, private companies or public administrations involved.

Europe in 2011 tried to lay down the timings, to determine how many days could correspond to the correct waiting period for the compensation to be carried out or the goods sold.
It is a shame that both the private individuals and the public administration who ignore such directives are creating difficulties for creditors.

In Italy the European directive 2011/7 was introduced by the legislation decree no. 192 from 9 November 2012. Apparently the intention was to respecting the European desire to introduce rules even more rigid than that which was requested.
The European directive asks every debtor to pay within 30 days following the receipt of the invoice.
The creditor has been given the possibility to request interest on what is not paid from the 31st day, without having requested the payment in advance.
Regarding the rate of interest to be applied it is based on the agreements made when the contract was created or, if not specified, the rate is applied by the Central European Bank, raised by at least 8 percent.

To induce the European parliament to have a specific law, there have been long waiting periods before recorded before payments are made, both from public administrations and from private individuals.
After five years the statistics clearly reveal that the law will not manager to change these bad habits, but has at least produced an important legal foothold to be able to claim their money.

One in four businesses close as a result of delayed payments.

The systematic violation of the norms in this area has resulted in the release of an official warning in Italy.

The recovery of credit from a debtor living abroad, can be successful if an individual relies on specialists with experience in the sector.
The lawyers at Boccadutri International Law Firm have the professional and linguistic skills to help you recover that which you are owed. Do not hesitate to contact us here.