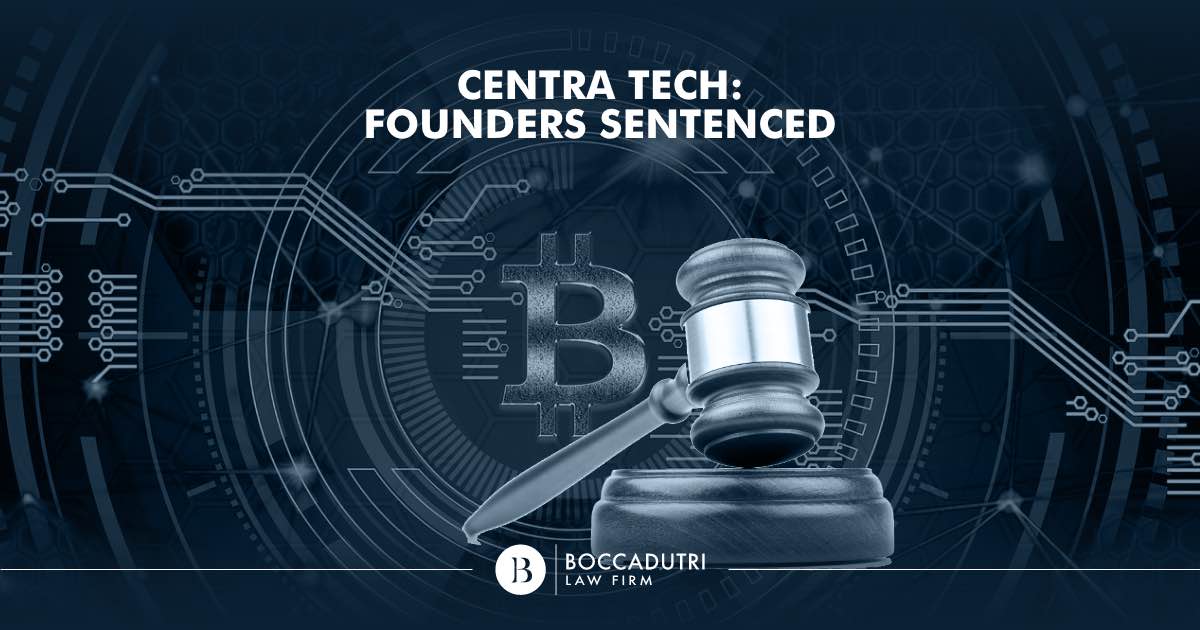 On March 4, 2021, Sohrab Sharma, known as Sam Sharma, was sentenced by Manhattan Federal Court to 8 years’ imprisonment, plus three years’ probation. Moreover, he must pay a $20,000 fine while authorities have seized approximately $36 million from his assets as fraud proceeds.

Sharma was found guilty of creating, in collaboration with his two co-founders Raymond Trapani and Robert Joseph Farkas, a fraudulent scheme designed to deceive investors of Centra Tech.

Investigations have proven that Sharma, together with his accomplices, perpetrated this deception by boasting false business partnerships (for example, credit card schemes) and exhibiting false licenses. In addition, in order to evade accusations due to lack of experience, they simulated the presence of top highly qualified managers, crediting a whole group of non-existent professionals with highfalutin titles.

These flase claims, alongside a marketing campaign that was focused on endorsements of their financial products by well-known personalities, led investors from all over the world to pour tens of millions of dollars into Centra Tech’s coffers.

Sharma pleaded guilty to conspiring with Raymond Trapani and Robert Joseph Farkas (who have also both confessed) to commit financial fraud, wire fraud and mail fraud.

He confessed to using deception to solicit investors to buy stocks in the form of (worthless) digital tokens issued by Centra Tech. At the basis of which, was fraudulent funds that included an Initial Coin Offering (ICO).

The beginning of this scam can be traced back to 2017.

Centra Tech: History of the Scam

Centra Tech was born in Miami in July 2017, the brainchild of Sam Sharma, Robert J. Farkas and Raymond Trapani. Sharma and Trapani met while working for Miami Exotics: a luxury car rental company in Florida.

Centra Tech’s objective was to offer cryptocurrency financial products. The flagship product was supposed to be a debit card, the ‘Centra Card’, which would allow users to make purchases using cryptocurrency from any vendor who accepts Visa or Mastercard payments.

From July to October 2017, Sharma and the other co-defendants solicited investors to purchase unregistered stocks in the form of digital tokens (so-called “Centra tokens” or “CTR tokens”) through a so-called “Initial Coin Offering” or “ICO” issued by Centra Tech.

Their extensive online advertising campaign included a collection of writings and videos marketing the skills of Centra Tech’s executive team and their CEO Michael Edwards: an executive with over 20 years’ experience in banking and a Master’s in Business Administration from Harvard University.

In addition, Centra Tech had obtained licenses to operate in 38 states.

The real peculiarity, which fooled investors, was its partnership with Bancorp, Visa and Mastercard. Because of this, Centra Tech appeared authorized to issue Centra Cards with the approval of Visa or Mastercard.

Sharma, Trapani and Farkas were arrested in April 2018.

Centra Tech: The Outcome of the Investigation

The reality that has emerged from the investigation is quite different from what was originally advertised:

In 2018, the Southern District of New York, U.S. Department of Justice, in conjunction with the Federal Bureau of Investigation (FBI), seized 100,000 Ether units from Centra Tech. These digital funds were derived from the purchase of digital tokens issued by Centra Tech, but were extorted by giving investors false information.

The United States Marshals Service sold the seized Ether units for approximately $33.4 million in early 2021. These funds, along with others seized as part of the proceedings, are intended to be used in order to reimburse victims of the Centra Tech fraud.

Farkas got off with a sentence of one year and one day in prison, plus three years’ probation. Authorities also seized approximately $347,000 from his assets and a Rolex watch, which was purchased with the proceeds of the scam.

According to one of the attorneys involved, Farkas and his accomplices misled investors in their ICO, inducing them to invest digital currency, worth millions of dollars, based on fictitious claims about their company, including false statements regarding ownership of alleged digital technologies and relationships with giants in the traditional financial world.

The prosecutor, concerning the conduct of Centra Tech’s co-founders, commented that, “Whether in the context of traditional equity IPOs or new cryptocurrency ICOs, raising capital through lies and deception is a crime.”

In Centra Tech’s case, the U.S. Securities and Exchange Commission (SEC) has leveled charges, for the first time in its history, against those who lent themselves to illegally promoting ICOs.

The two U.S. VIPs involved agreed to pay a fine and to not promote stocks of any kind for a period of three years.

There were also several celebrities who supported an Initial Coin Offering.

It is not uncommon for celebrities to endorse financial products in order to increase their credibility in the eyes of supporters. However, there have been numerous cases in which the image of a VIP has been used for advertising purposes without their knowledge.

The SEC wants to send an unequivocal message, “It’s not just the companies that sell who can be held liable for illicit stock transactions; even those who use platforms with a large following to promote these investments can be fined and blocked.”

A success as fast as it is ephemeral. Since its early days, many have sensed Centra Tech’s inconsistencies, especially given the fact that it was founded and managed by inexperienced members in their early twenties.

The New York Times uncovered this Pandora’s box on October 27, 2017 with an article dedicated to Centra Tech and the celebrities who supported it.

Even then, doubts had already emerged about the Managing Director and the company’s weak business plan. For this reason, the newspaper carried out its own investigations.

At this point, there was no mention of fraud yet and the co-founders’ trouble with the law was limited to a perjury indictment related to a DUI case.

The NYT pointed out that celebrity intervention offered legitimacy and gave attention to coin offerings that otherwise would have gone unnoticed.

Leading Centra Tech, in fact, turned out to be three people with no professional experience in the field of technology associated with virtual currencies, nor with the debit cards they were supposed to produce.

The article solely talked about the indictment of Sharma and Trapani on charges of perjury stemming from a DUI case. It emerged that Sharma had a string of small priors for fraud – a far cry from what awaited him.

If you have invested in Centra Tech or in other companies that later turned out to be non-transparent, you can get advice and assistance from the lawyers of the Forex Litigation Department of our International Law Firm.

Make sure to gather evidence of what has happened. With this, together we can assess whether you have been the victim of fraud and whether there is a way to recover what you have lost.