A Guide to Divorce in Italy 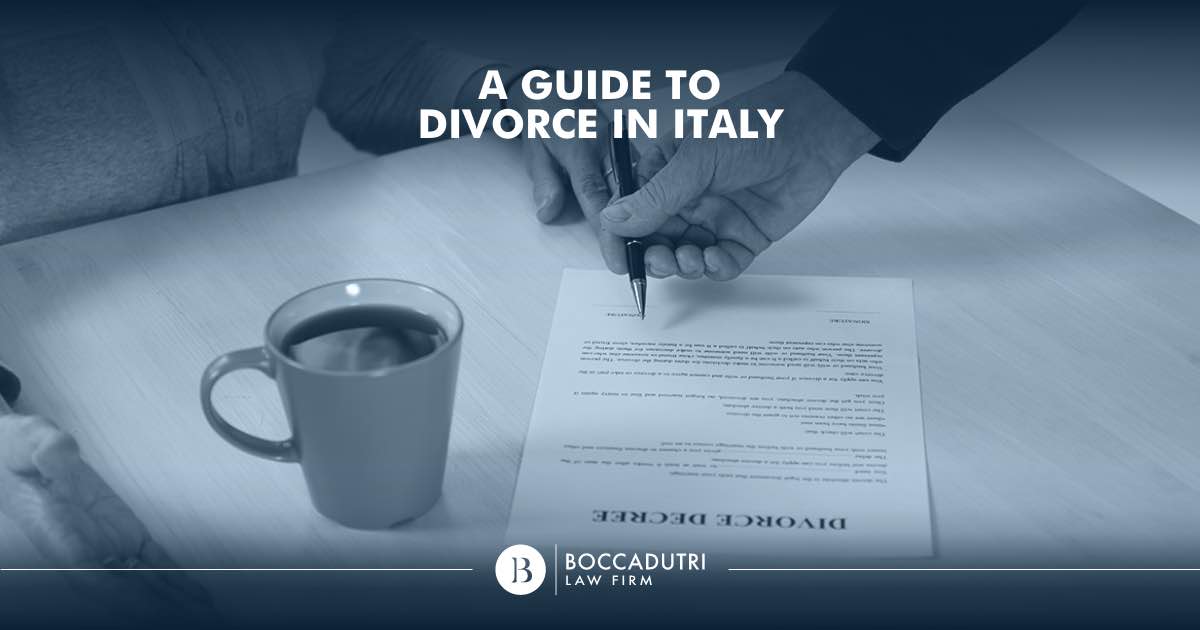 Divorce in Italy, except under abnormal circumstances, is permitted following a period of separation (usually 6 months) after separation by mutual consent, or a year after a judicial separation.

Divorce in Italy is typically the result of two separate proceedings: separation, and divorce.  In exceptional circumstances, however, it is possible to divorce immediately.

Since the institution of divorce was legally introduced in Italy in 1970, with the Law No. 898 of December 1st 1970 (entitled ‘’Disciplina dei casi di scioglimento del matrimonio’’), many changes have been made, such as the Law 55/2015 or the Short Divorce Law, which has reduced the time to apply for divorce from 3 year to 6 months in the case of separation of mutual consent, and to one year in the case of judicial separation.

The causes of divorce

The so-called ‘grounds for divorce’ can be numerous and do not always solely concern the incompatibility of spouses’ personalities.

Some of them lead to immediate divorce, depending on whether or not the situation can be remedied.

They are listed as:

The procedure for divorce, and consequently the steps leading to a divorce, change depending on the way in which you wish to get divorced.

What do you need to do to get a divorce? There are two possible routes:

Divorce by mutual consent, that begins with separation, represents an agreement.

Judicial divorce, always preceded by separation, is a full-scale lawsuit.

What to do to obtain consensual divorce

Divorce is not an automatic consequence of six months of separation but requires a formal request.

Divorce by Means of a Court, or joint, hearing

Even in a consensual divorce, the parties may choose to go to court. It should be noted that this choice may extend the process by up to six months.

The procedure is as follows:

Assisted divorce is desirable in cases of agreement. The estimated time frame for a divorce via means of assisted negotiation is less than two months.

In the presence of their lawyers, the soon to be separated couple agree on the terms of the divorce. The lawyers, as public officials, authenticate the “assisted negotiation agreement”.

The agreement is sent to the public prosecutor, at the relevant office for the territory.

The prosecutor, if they consider the agreement to be in order, may issue a “nulla osta” or authorisation and the agreement is sent to the civil registrar, who may register the divorce on the marriage certificate.

In the case that the couple have minor children, or children who, although of age, are incapacitated or severely handicapped, this step must take place within 10 days.

As concerns the public prosecutor, should they find the agreement to be in some way inadequate, they will have 5 days to declare it to be so to the President of the Court that ought to set a comparative hearing for the parents.

Consensual divorce at the Commune

It is also possible to obtain a divorce without legal assistance by appearing before they mayor or a civil registrar acting on their behalf.

The fulfilment of the divorce, in this case, can only take place if there are no minor children or adult children in a position of dependency be it financial or physical due to incapacity or disability.

In addition, this agreement may not comprise the transfer of assets. A maintenance payment may be included but may not be made out in a single payment.

Divorce is not an automatic consequence of a couple’s separation. Even if the separation has lasted more than a year the parties will still need to make a formal request.

In contrast to a consensual divorce, the possible ways of pursuing a divorce following a judicial separation are limited and a court settlement is inevitable.

At this stage, specifically once the deadlines for filing for divorce have passed, there is still time to reach an agreement with the former partner and to opt for one of the methods by which a consensual divorce is possible.

Contentious divorce is divorce without agreement or consensus on the marital breakdown or form of separation.

In this case, one of the two spouses, the plaintiff, appeals to court with their own requests and demands in regard to their disagreement to the marriage (otherwise known as complaint for divorce) on the other spouse.

The other spouse, the defendant (or respondent), responds to these requests, and may oppose them and present their own points by making an appearance in court.

During the first stage of Contentious Divorce, i.e. the summary (or pretrial) procedure, the spouses appear before the President of the Court (or relevant Presiding Officer), who is obliged to issue the measures he or she deems most appropriate to protect any children and/or the spouses themselves.

At this point, a Judge is appointed for the subsequent stage.

During the second stage of Contentious Divorce, i.e. the investigation, hearings take place during which evidence is presented and examined, witnesses are heard and, if possible, so are the children.

The clerk will then communicate the divorce to the civil registrar of the Commune in which the marriage was registered.

What are the consequences or effects of divorce?

Once the divorce decree has been pronounced in Italy, the marriage bond is completely dissolved. Both the spouses regain their ‘’free’’ status and can enter into a new marriage that is valid under civil law.

The wife loses her husband’s surname, unless she applies to keep it and obtains authorisation from the judge.

In case of couples with children that are minors, or children who have reached the age of consent and are not self-sufficient, incapacitated or are seriously handicapped, the divorce decree must rule on their custody.

The parent with whom the children will be living with most of the time tends to be left the family home.

Children or not, the distribution of the house and other joint assets will still have to be decided if they are owned.

Depending on the status of the assets, one of the spouses may have to pay the other a regular ‘’divorce allowance’’, traditionally referred to as ‘’alimony’’.

If the parties reach an agreement to this effect, the regular allowance may be replaced by a single allowance paid in a lump sum, subject to the agreement of the court, which must ensure that the amount is appropriate.

In the case of Civil Marriage, celebrated in church and registered in a civil office, council or state registry (otherwise known as ‘’Commune’’), only the civil status of the marriage ceases, but in order to dissolve the religious bond, a pronouncement of annulment is required from the Regional Ecclesiastical Tribunal or the Sacra Rota.

A spouse in receipt of a maintenance allowance is entitled, if he or she has not remarried, to a percentage of the severance pay received by the other spouse on termination of employment, even if accrued and received after the judgment.

The right is limited to the years in which the employment agreement coincided with the marriage, so a percentage of forty percent is calculated for those years (Art. 12 (bis), Law 898/1970).

In the event of the death of a former spouse, in the absence of a subsequent marriage, the spouse who has been receiving maintenance payments up to that point (not having remarried), will be entitled to a survivor’s pension, provided that the employment contract from which the pension is derived preceded the divorce decree in Italy.

If there is a surviving spouse who qualifies for a survivor’s pension the court will have to establish, based on the duration of the marriage and the level of need, the shares to be allocated.

A separated spouse is also entitled to a survivor’s allowance, unless they have already been ordered to separate and the court has not recognised their right to receive a divorce allowance.

The divorced spouse has no right over the other spouses’ estate, at his or her death, but could be included in the will. In addition, in case of demonstrated need, according to the provisions of Article 9 of Law 898 (bis) of 1970, they may receive an ‘inheritance’ allowance from their heirs.

The conditions for this to happen are:

In any case, this right would cease if maintenance had already been paid in a lump sum or if a new marriage was contracted.

In addition, if the state of need ceases, the payment of the inheritance allowances ceases.

Our lawyers in the Family Law Department of Boccadutri International Law Firm, will be able to follow you through the separation and divorce process, answering all your questions and clarifying all your doubts.