Fellipe Rodrigues works in Business and Company Law, advising and consulting companies, developing corporate reorganisation instruments such as mergers, divisions and transformations. He also has expertise in conducting corporate routines, including amendments to social contracts and legal status, preparation of regular, complex and special general meetings, Partners meetings, board of directors, board of executive officers and fiscal councils, opening and filing of corporate books, as well as the compilation of the necessary records before the Commercial Boards and the Civil Registers of the competent Legal Entities.

In Probate Law, Succession and Family Law, providing legal advice and performing the opening and processing of judicial and extrajudicial inventories, the elaboration of pacts of stable union and their extrajudicial dissolution, as well as acting in lawsuits of recognition and on the dissolution of common-law marriage, divorce, collection action, review and imposition of alimony payments, among other related areas.

Real Estate Law, Civil Litigation and Contracts, providing legal advice to individuals and legal entities in the drafting of contracts (civil and leases), as well as actions in civil liability actions for emotional and/or material damages, related to property rights, leasehold actions, guardianship and curatorship actions, among others.

He has worked in Criminal Law, Special Criminal Court (JECRIM), as well as other actions before the criminal court and its rites, as well as follow-ups to police departments.

He is responsible for the legal department of Rodrigues Condominium Management Company (Rodrigues Administradora de condomínios).

Previously, he has worked as an attorney for the Employers’ Union of Rio de Janeiro’s Vehicle Repair Companies (SINDIREPA), associated with FIRJAN (Federation of Industries of Rio de Janeiro).

He has been a member of the Brazilian Bar Association (OAB) since 2010.

He specialized in Public and Private Law from at the Judiciary School of the State of Rio de Janeiro (Escola da Magistratura do Estado do Rio de Janeiro – EMERJ).

He is a member speaker of ELADISC – 2009 (Latin American meeting of law, society and culture).

He speaks Portuguese and English. 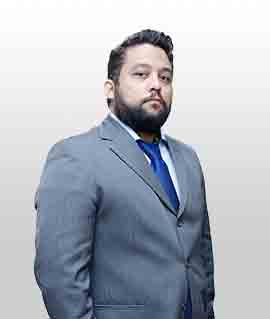