Work protection: what is Whistleblowing 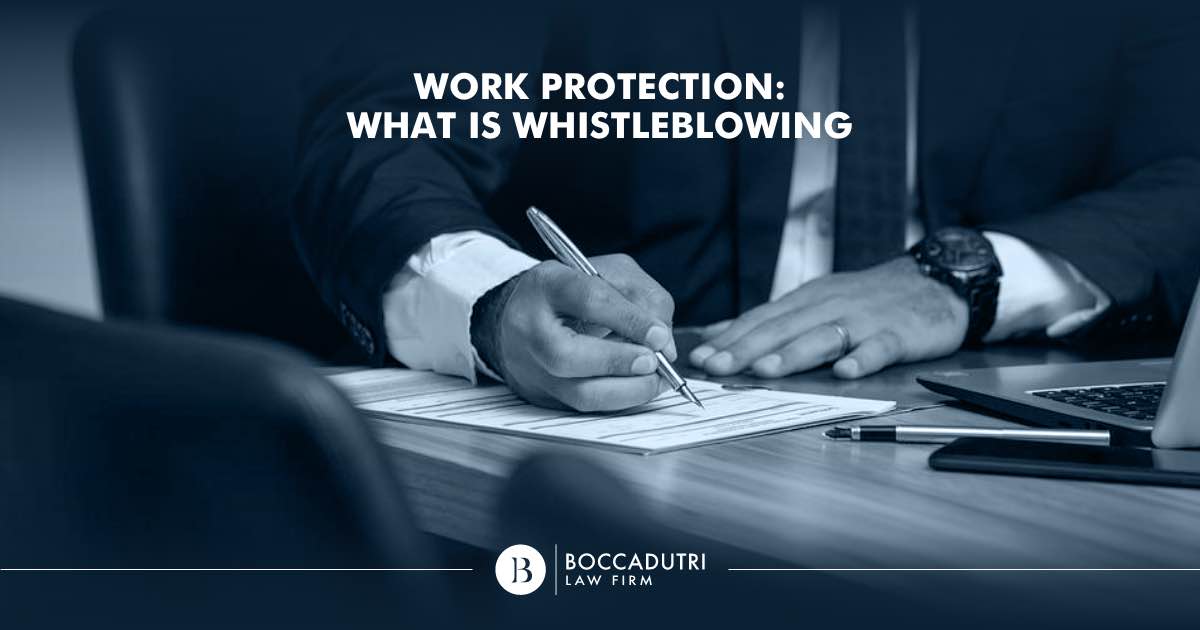 Whistleblowing regulates how to report misconduct in the workplace and provides for the protection of those who report it.

Whistleblowing means reporting an offence you have become aware of in the course of your work, whether in the public or private sector.

An offence could be fraud, failure to implement safety regulations, blatantly unlawful behaviour, etc, and the offender could be an employer, a manager, a colleague, or even a customer.

Among the undeniable rights of the worker is the right to self-defence, and this is the purpose of reporting, i.e., to ensure that work is carried out in the safest and most pleasant manner possible.

Italian law introduced, through Article 54-bis of Legislative Decree No. 165 of 2001, the possibility of protection for employees who report wrongdoing in the workplace.

Subsequently, whistleblowing assumed the status of a legal entity with Law No. 190 of 2012, which, however, only regulated the public sector. It was only in 2017, with Act 179, that the private sector was also regulated.

The legislation regulates the ways in which whistleblowing can take place, different in the public and private sector, and governs the measures to protect the reporting party, the so-called whistle-blower.

For the State, the whistle-blower is an important resource to monitor, above all, the proper conduct of work in public interest entities.

Confidentiality, i.e., the anonymity of the report, may not be enough to protect against retaliation or discrimination.

Reports of malpractice in the Public Administration

Reports of offences in the Public Administration should be addressed either to the officer in charge of corruption prevention and protection of transparency, or directly to the National Anti-Corruption Authority (Anac), or to the judicial authority.

Public administration employees are defined as those who work for public bodies, public authorities, but also for private law entities, which are subject to public control.

Public sector employees also include those who work for companies that provide goods or services to public administrations.

In fact, a public employee who reports wrongdoing “may not be sanctioned, demoted, dismissed, transferred, or subjected to any other organisational measure having direct or indirect negative effects on working conditions determined by the report”.

Anonymity should be the best deterrent for retaliation, but it is not always possible to maintain it, and it is known that even mere suspicion could generate consequences.

Whistleblowing in the private sector

Reports of misconduct in the private sector involve channels that are even more confidential than those in the public sector because they do not have to make a direct report but can make use of various channels available to the Supervisory Board, including a telematic reports, which allow confidentiality and anonymity.

By law, all private organisations are obliged to set up channels to report offences in total anonymity.

The Supervisory Board collects and assesses the reports and assigns the case to the competent authorities. In case of proven retaliation against the whistle-blower, a complaint to the Labour Inspectorate may be launched.

If it came to dismissal because of whistleblowing, the whistle-blower would be immediately reinstated.

Sanctions for retaliation against whistle-blowers

Harassing a whistle-blower could also lead to sanctions.

ANAC may charge fines of up to EUR 30,000 to the institution or administrator that has taken discriminatory measures against the whistle-blower.

The fine could be up to EUR 50,000 if the employee’s name is revealed, violating his right to confidentiality.

Fines of up to EUR 50,000 euro also apply to those who fail to verify the reports received.

The consequences of unsubstantiated reports

Should the reports prove to be unsubstantiated and aimed at targeting the institution or company for malicious intent and/or gross negligence, whether evidence is missing or has been manipulated to make something appear real that is not, it is the whistle-blower who will incur sanctions or disciplinary measures.

Whistleblowing may not be misused for revenge or sabotage.

If you are looking for legal support on this topic, please do not hesitate to contact our colleagues in the Department of Personal Injury at Boccadutri International Law Firm.