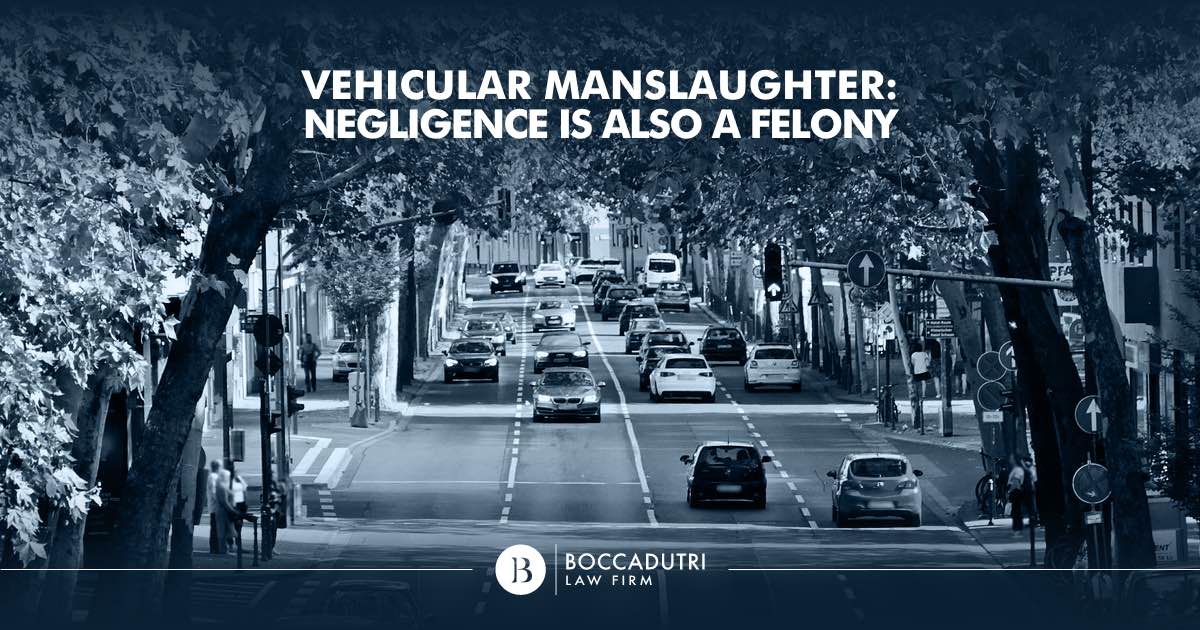 Ask a question about Personal Injury

On March 23, 2016, the statute for vehicular manslaughter was hailed as the missing link of the Italian legal system.
A law for some less than perfect, since it places those who get behind the wheel while assuming guilty behavior and cause fatal casualties and those that cause an accident by chance on the same level.

A later communication was sent by the Ministry of the Interior to police headquarters; Carabinieri, Police, Guardia di Finanza (financial police).
This communication indicated that in the event of a fatal accident, the blame is not only given to those present at the time of the accident but also to those who indirectly caused the casualty.

The newsletter calls for an investigation, on those who doing their job with superficiality, failed to fulfill their duty towards citizens.
In this category of possible imputable subjects; there are entities of roads (municipalities, regions and State).
With these entities we include their directors, city councilors, mayors and companies responsible for managing motorways (primarily managers of Anas).
Also motor vehicle manufactures fall into this category.
If a vehicle is produced and placed on the market, and is faulty, it could create a hazardous situation. The manufacturers could be subjected to persecution and arrest.

It is not uncommon to come across bad roads, potholes, signs placed incorrectly, crosswalks deleted from abrasion, poor lighting in streets or tunnels, and guard rails older than can be expected.
Also chronicles of vehicles withdrawn from the market for defects in some of their components (brakes, seat belts, transmission, and airbags ECT.).
So, the new law (and the next round of coordination with the Highway Code) leaves no chance to those who so far has deferred maintenance or gave the green light to factory defective vehicles.

Traffic regulations not only require proper conduct be adopted while driving but also to ensure that there are guidelines to follow.
This means constant maintenance and construction of roads and vehicles is made with skill.
This lack of attention can result in imprisonment for two to seven years.
Article 14 of the Highway Code indicates that the road entities must ensure “maintenance, management and street cleaning and the placing and maintenance of required road signs.

Anas executives, mayors, managers of big car manufacturers, have the obligation to ensure safety on the roads and streets.

If there are fatalities, the contractor who has custody or the design will be identified. The entity or the manufacturer is attributed the crime of manslaughter.

An arrest may be made if there is a fatal car accident.
Certainly all details and the dynamics of the accident will carefully be documented.
The responsibility between the entity and the road will also be assessed.
That is to take into account, if the entity in addition to being an operator retained control of the asset and therefore could be informed of its actual conditions.

If the authority was informed and did not remove the dangers on the road it is clearly contributory negligence in the event of a claim, if there is a cause-effect relationship between the irregularity of the road and the damage caused.

It doesn’t matter if the hidden danger is a pothole rather than a dark tunnel or if it is noticeable or not.
This once served as discriminating factor to obtain compensation from public authorities.
The victim should not have to prove that there was hidden danger because the sole fact that the danger is present, constitutes a criminal offence.

The custodian of the road is the arbitrator of the outcome of those who transit on the street and no less than those who are behind the wheel.

If you believe that your relative has been killed by driving on dangerous roads or highways, or if the means involved are part of a series of vehicles taken off the market, do not hesitate to contact our law firm.
We will evaluate together what action will be taken against those responsible.