Usury Banking – When banks commit usury, you can get your money back 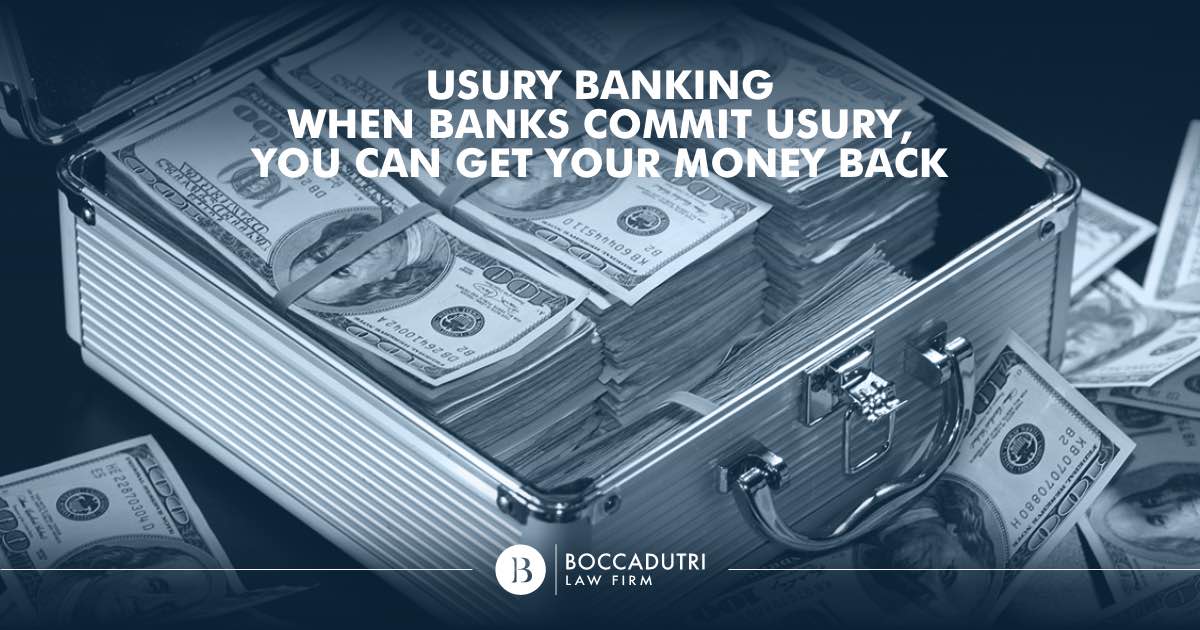 When banks commit usury, you can get your money back

Usury is illegal and punishable with the return of sums paid in excess. Behind every loan there could be a scam hiding. But you can and must get justice.

In preparing documents for the granting of loans or overdrafts, it is not uncommon for banks to apply very high rates, inconsistent with the directives that regulate loans.

In this case you can find yourself in front of true usury rates, hidden behind folds in contracts and therefore difficult to understand or indistinguishable for inexpert eyes. This is also the case because copies to be valued externally before the signature are rarely granted.

It has been a talking point for years, with the only result being that the phenomenon continues to manifest itself and that the less attentive continue to pay to banks, for their loans, much more than is really owed.

There is a great risk of usury for users but also of compound interest, that is to say having to pay interest calculated on interest.

When an interest rate can be defined as usury

At the moment of the drafting of the contract of a loan or overdraft, the bank institution that supplies it is obliged to consult the so-called “threshold rate”, a limit that the Bank of Italy establishes every month and which is available on its website.

Based on the maximum interest rate agreed by the Bank of Italy, the bank should necessarily apply a lower rate.

In cases in which it bypasses the directives and exceeds taxes, the rate that applies is a usury rate.

To understand if the applied interest rate to your loan adheres to the standards of the Bank of Italy you should trust professionals who can consult the contract signed with the bank and the bank statement.

The amounts of the “Net Annual Percentage Rate” (APR) and “late payment fees” (the one laid out for the cases in which the client does not manage to pay certain rates), once added up, the rates have to be lower than the “threshold rate” established at the moment of the drafting of the contract.

It is the sum of these two interest rates themselves that determines the rate actually applied to financing.

In more dated contracts it is very common for the sum of the two rates (APR and late fees) to exceed the threshold rate, by determining the usury and, therefore, the invalidity of the clause of the stipulation of interests.

In the more recent contracts (but not in all of them) the banks, to prevent what would be a catastrophic effect for them, have inserted safeguarding clauses.

“In accordance with this interest the rate will never exceed the limit fixed in article 2 paragraph four, of the law of the 7 March 1996 no. 108, meaning that in the case of a theoretically overrun of so-called limit, that the size be equal to the same limit.”

These clauses mean that the threshold rate is not exceeded.

A first test that should be done on the contract, therefore, is to check whether the bank has inserted one of these safeguarding clauses or not.

Obviously, this is not enough because, according to the most recent rulings, even in the presence of a safeguard clause, the loan could be equally usurious.

In fact, all the duties of those that must return the credit, that is to say the preliminary, intermediary, renegotiation, insurance costs can contribute to making a usurious contract.

Costs that actually increase the cost endured by the citizen/consumer up until or even beyond the threshold, with effects similar to those that are checked where the rates are already usurious.

A contract that applies a usurious interest rate (in the full sense described above) should be invalidated with the consequent duty on the part of the bank to return the interest paid up until that moment.

If circumstances such as this happen, future interest and potential expropriate procedures are also abolished.

According to the Supreme Court, the ruling/conviction/sentence no. 350 of 2013, the key moment for determining the interest rate is when this tax is agreed upon with the client, or promised in any case, regardless when it is equalled for the first time.

The weakness of banks

A high percentage of contracts stipulated by account holders with banks creates vices.

If the irregularities are serious, valid grounds are created to reclaim penal or contentious cases, to recover money paid in excess.

In 2014, the Foundation Sdl published a report on usury practises by banks.

The data were disconcerting: out of 47,000 current company accounts that were analysed, 99% of them led to irregular results. In the analysis it emerged that 71% of cases presented situations of objective usury, that is to say with passive interest rates higher than the threshold rate of the Bank of Italy; in 74% of cases it turned out to be subjective usury, or rather with the application of serious conditions if compared with the already difficult situation in the company.

In 71 cases out of 100, compound interest was verified, meaning interest on interest.

It is said that data have been extrapolated by companies that turned to the association because they were forced to by suspicions about the irregularities of their contracts.

When the bank’s client cannot pay the instalments of the debt within the terms, in case of usury, the penalties that are applied end up inevitably being very high.

The paradox is that the private client or business could find itself in difficulty against the Credit Institution notwithstanding the excessive figures already transferred illegitimately.

A new course for procedures

There exists a law, the “Testo Unico Bancario”, which forces the bank to provide the client with documents if they request them.

However, in the past, the wrongful claim on the part of the client prevented a complete documentation being provided in front of the tribunals and led to similar cases being lost.

The Court of Appeal has intervened to assist current account holders, and with the sentence no. 5091/16, established that banks must produce the full documentation necessary for the case, from bank statements to CTU, the Consulenza Tecnica di Ufficio (Court-appointed witness).

If the documents in the hands of the client are not complete the judge can force the counterparty/opposing party to produce the documents needed to clarify the facts.

This is a fundamental decision, for future cases, where previously the judges expressed themselves in a contradictory manner.

Trusting professionals in these circumstances is important. Our expert banking and finance lawyers will be able to clarify any doubts you may have about the contract that you have agreed upon with the bank, or about recovering any money paid illegitimately.

Whether you are a private citizen or are representing a business, we will do all in our power to recover your money.

Our lawyers will respond to your requests and will clarify your situation, because it is also important to defend yourself from the banks.

You can contact our lawyers by filling in this request form here.