Tourist rentals: business or not? 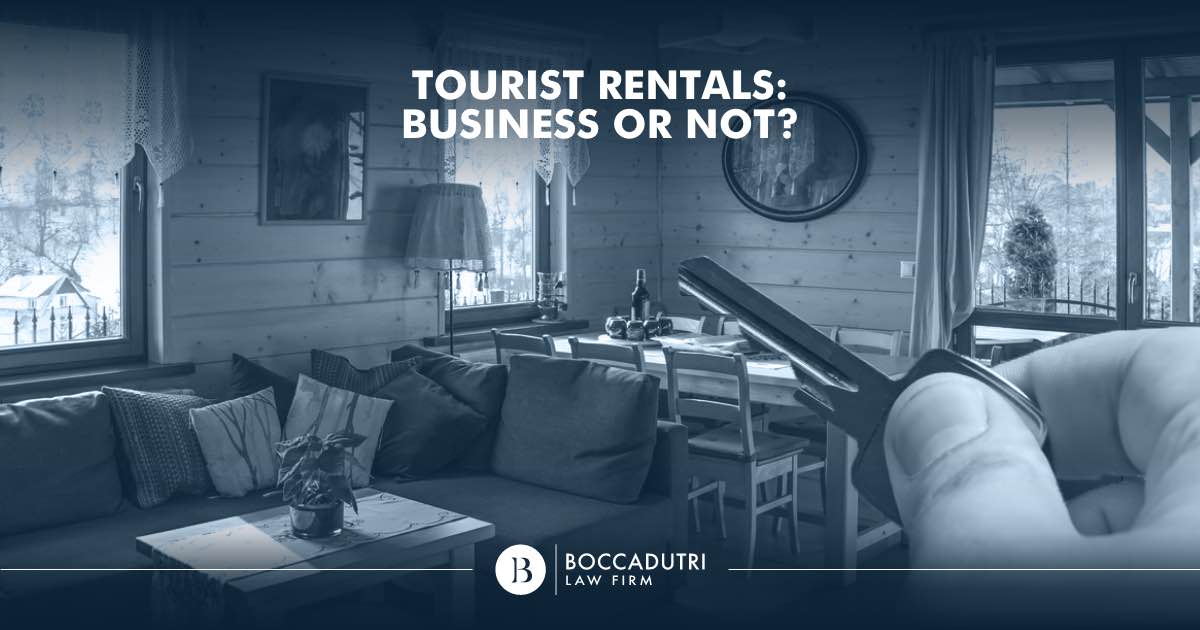 Those who own houses that stay empty for the majority of the year can rent them out to tourists.
The region of Lombardy has already sniffed out the deal and has allowed the phenomenon to take off, but elsewhere suspicion reigns, with the legal draft now ready.

Tourism 2.0 is all about rentals. At one time tourist rentals were done on a much more ad hoc basis, but because of the evolution of the phenomenon, it has become a lucrative market.
As mentioned above, it has therefore become subject to regulations.

Owning a second home and leaving it practically empty is a real waste if, for short periods, it could be adapted to host visitors who have not found space elsewhere.

Moreover, a healthy percentage of available housing is owned by foreigners through inheritance or investments.
In the last few years, foreigners have invested a lot in the Italian real estate market and, according to sector studies, 2016 finished with a substantial +53.89% (report by Gateway.com).
Whether they are unused or exploited for short periods, owning a house means the payment of taxes and operating expenses. Letting strangers pay for this by paying you represents a good way of covering these costs, and might even bring in some money on top.

Even though tourism might be part of a region’s remit, and each region can draft its own legislation in the field, depending on the particularities of the territory, the tourist lease in Italy is still regulated by article 1571 (and the following ones) of the Civil Code, of law no. 431 from 1998 and from the Codice del Turismo (Tourism Code), D.Lgs 79/2011, art. 53.

The general idea behind tourist rentals seems to be leniency, but with the growth of the phenomenon, some regions have decided to create specific regulations. This is the case in Lazio, Lombardy, Liguria, Emilia Romagna and Tuscany.

Liguria allows tourist leases without VAT for a maximum of three residential agreements in the same district, and for rentals of less than 12 consecutive months.
In Emilia Romagna, only three properties can be rented, and for not longer than six consecutive months.

The region of Lazio, despite not openly rejecting the phenomenon of tourist rentals, has given hints at limitations at the busiest times for tourism, leaving the final decision as to when these periods exactly are to each Comune.
However, the Autorità Garante della Concorrenza (Antitrust Authority) opposed one ruling that was brought to its attention because extended periods of closure would hinder supply and demand.

In Tuscany, according to the new regional Law 86 of the 20/12/2016, more than two residences in the course of a calendar year cannot be allocated and a maximum of eighty announcements can be made throughout the year.

Lombardy has gone in a very different direction since October 2015, with its regional law no. 27/2015, which included “non-professional” rent among its forms of accepted accommodation, thereby legalising Airbnb and other, similar platforms. The only limitation is that there can be no more than three such rental spaces per Comune.

These regulations have thrown the region into the jurisdiction of the worldwide Sharing Economy.

The Sharing Economy Act, a proposed law (3564), is being debated at the Italian Camera (Chamber of Deputies).
It concerns a law that takes into consideration the division of goods and services, in any form. If it passes in its current form it will bring change to tax revenues, with the rate lowered to 10% for annual earnings of up to €10,000.

Customs duties would be brought in through portals, which would then deposit them at the treasury on behalf of the registered members.
Once the €10,000 of annual income has been exceeded, the money coming in is considered income and so would be added up with other revenue.

The law, in its objectives, aims to promote an economy of sharing by giving it specific regulations.

Tourist rental distinguishes itself from so-called holiday homes or bed and breakfasts because it consists in the simple rent of a room or apartment for a short period of time, without extra services such as breakfast, lunch or dinner, and cleaning.

These “shortcomings” make the price of rent more accessible than that of other more accommodating structures and this is why many professionals in the sector would like to stem the flow.

Supply and demand for tourist rentals come together in circles that have often grown out of social networks into sites allowing anyone to offer or search for rentals.
The most renowned is Airbnb, a platform that strikes the balance of having both a payment and an exchange of information.

Often the apartments that are rented are in apartment buildings, and there are a high number of cases left untried by the Condominiums themselves against such activities.
The Court of Appeal has already found a way of debating the extent to which it is legal to make your house available for tourism purposes without becoming a “business” because of it.

The Court of Appeal has for the most part fallen on the side of landlords, in cases where a specific condominium regulation prohibiting them doesn’t exist.
Often, if it is explained, the judgement is about not being able to lodge people, not of the lodging of tourists specifically.
This is because such activity cannot damage other condominiums.

Called into the debate, administrative judges of TAR (the regional administrative body of) Veneto have established that not all accommodation can be considered entrepreneurial activity. An inspection would have to be made of every single case.

Another regional, administrative Tribunal in Lazio (verdict no. 6755) has declared illegitimate any regulation that might limit the practice of any activity.
The important point in the details is the one in Lazio’s regional law that enforces closure during less “active” periods of the year.
The TAR (regional administrative court) has rejected the establishment of a minimum period for rental contracts, to limits and dimensions of houses to rent and to all the duties that mean adapting to the existing structures.

The principal statement from Lazio’s TAR is that “all that is not expressly prohibited by law must be permitted.”