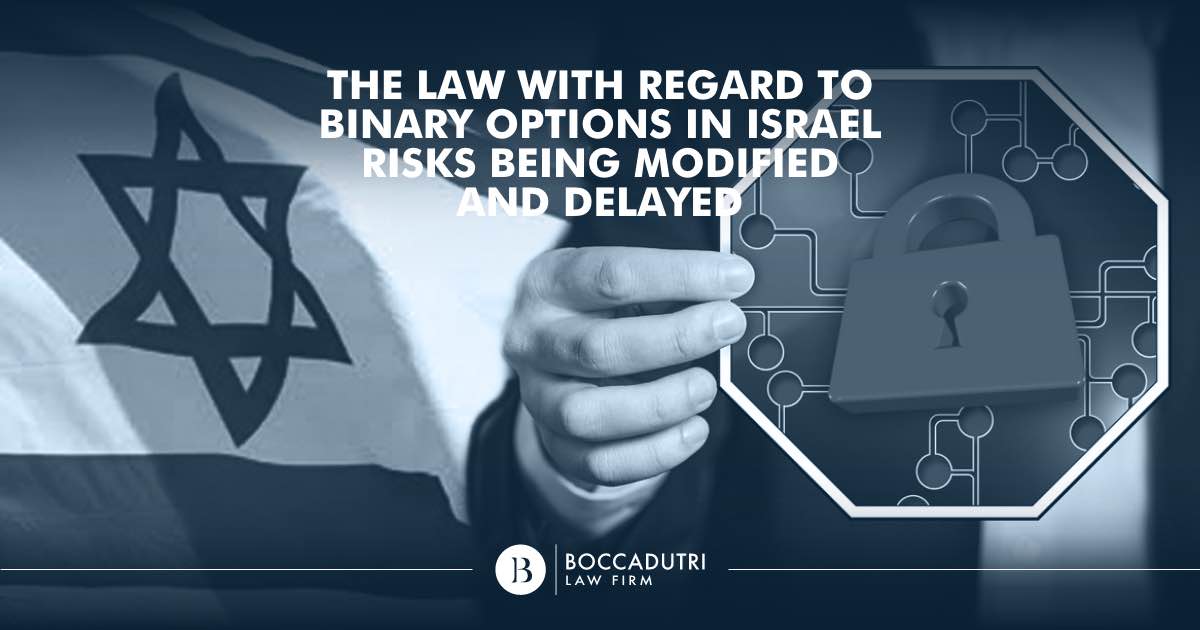 Too many scams are perpetrated through binary options, they often have roots in Middle Eastern countries so that they are able to continue to pretend that nothing is going on. The Israeli government is preparing are ready to equip themselves with a law to protect its citizens from foreigners. It is shame that not all the members of parliament agree as to what is forbidden and for whom it is forbidden.

After months of rumours withint the first three months of 2018 the business of binary options could be outlawed in Israel for anyone using it throughout the world.
The guide lines were written in collaboration with the ISA (Israel Secuitires Authority), the Israeli authority that monitors financial markets and the methods of banks, and from the Minister of Finance.

The ban was in current Israeli legislation, but was limited to citizens of Middle Eastern countries, the Israeli businesses have not in reality been able to offer binary options to other Israeli citizens for quite some time. It is real shame that this first ban has caused an intense campaign for the inclusion of new clients abroad.

An uphill road- approval of the law regarding binary options

When first review the bill of the Knesset, the Israeli parliament, had expressed itself with a considerable vote in its favour, 31 said yes and no one was opposed to the bill.
The rules of the Knesset, however, require three reviews of the bill before it can effectively become law, with a final vote that occurs at at the end of the third review.

The only observations that have been made during Knesset’s sitting to vote for law, regarding the possible future extension to other areas, to protect the realtive different savers fromspeculative investment. The ban on this international business will in fact it will limit binary options and not Forex trading or CFD.

If the three reviews had come by the 31st of July, the law would have come into effect in autumn. But after the promising beginning everything went awry.
First of all, the knowledge that the Knesset would close its doors to the summer break before the definite discussion. Then the discovery that the text was not exactly how one expected it to be, as a result of the numerous modifications, eventually Likud’s stance, asked for further changes to the bill.

The full extent of the powers of the regulatory body-the ISA, could be affirmed

The Israeli regulatory body the ISA has struggled for years to restore a good reputation for Israel. The news is full of stories of scams that have taken place in Israel.
Thanks to the current law the ISA can halt the internal scams, but the world has continued to protest the proliferation of scams by business with headquarters in Israel.
There are sad stories of savings of a life time disappearing into a puff of smoke and of the broker disappearing after the devastating blow. There are tragic stories of those who are not able to overcome the embarassment of losing all of their money and so choose to end their lives.

The new law will forbid all brokers of binary options companies based in Israel from contacting foreign clients and from doing business with them using binary options or related services.

Those who bypass the regulations of doing businesss in binary options will be punished with a prison sentence that could amount to two years. With a review of the crime it could be considered a violation of the anti-money laundering laws in Israel, and there is a possiblity of an imprisonment lasting years and economic penalities.

The issue that impedes the law

At the end of July after apparent rapid progress, the law on binary options in Israel, was postponed to the first three months of 2018. The final day of deliberations regarding the bill in committe for the reforms of the Knesset are as complex as crime novel.

Although the bill had been voted in and approved by the present members of the Knesset, David Bitan, a member of the majority party Likud, entered the room instisting some points to be changed.

The Israeli government consists of a colation of various paties, Likud is the largest party with the colation.

Moreover, David Bitan appeared in the commission accompanied by Moshe Avrahami, the president of SpotOption, namely a major supplier of binary options platforms from brokers. SpotOption is one of the businesses that would be badly affected if the law were to pass in its current form, the company in fact would be forced to transfer all of its business activity abroad.

As reported by the “The time of Israel”, the member of the Likud, Bitan and Mosher Avrahami would contest the part of the law that involves the sale of software, objecting that businesses that deal with software are in principal unrelated to what the software is used for.

Suddenly after the exchange of blows between Bitan and the president of the reform committee, Rachel Azaria (member of the Kulanu party, another member of the coalition government), an advocate of the Knesset asked the press to leave the room.

The contested law proposes a ban that would would take into consideration the software services that are used for the operators of binary options, the functioning of functional services of trading with binary options, and even any contact with clients that has binary options as its purpose.

Binary options software made in Israel

The problem is not only the binary options, but the ease with which the scammers are able to control their use and consumption, they are able to rely on cutting-edge software developed in the Middle East.
As a result, even those who provide the software could face imprisonment. Given with the well known military experience, Israeli software do not have any diffculty in developing cutting-edge programmes, capable of procesing large amounts of researched data from playing or trading online. But Likud has refused to accept the banning of these software businesses nor the responsilibty.

All of which has created considerable confusion because the nature of the law had already been approved before the intervention by the leader of Likud and is ready to return to the Knesset for subsequent …. and for the final vote that will render it law…

The next sitting of the Knesset is expected to be at the end of October, but at this point one cannot exclude further twists. Given the circumstances, the supporters of the law seem destined to have to compromise with the operators of platforms in order to bring about the law within a reasonable time frame.

The Israeli auhtority has hoped for regulation that would involve the software producers because without them the brokers would lose their weapons.
The Department of Justice has declared that in their view, the software businesses that develop platforms for trading are in effect all partners of the brokers. To produce a platform for fraudulent business renders them complicit in their crimes. To sell products that have fradulent elements is a crime.

The first effects of the law

Whilst waiting for the definite approval of the law, simply news of the discussion in parliament has already led to the closure of many binary options brokers.
Some of them have simply moved abroad, to other more lenient countries, namely Bulgary, the Ukraine, Latvia and Romania. If a person has obtained CySEC certfication they could have also moved to Cyprus.
On their part, the producers of software, while struggling to ask about being excluded from prohibitions, they prepare to relinquish binary options. SpotOption has already moved in order to adapt, in particular concentrating on the CFD and cutting staff in Israel.

The lawyers in the Forex Litigation Department at Boccadutri International, have often assisted victims of forex fraud and where possible have recuperated the invested amount of money that was withheld illegally.

If you believe yourself a victim of Forex Brokers, whose behaviour is often not transparent, do not hesitate to contact us here.