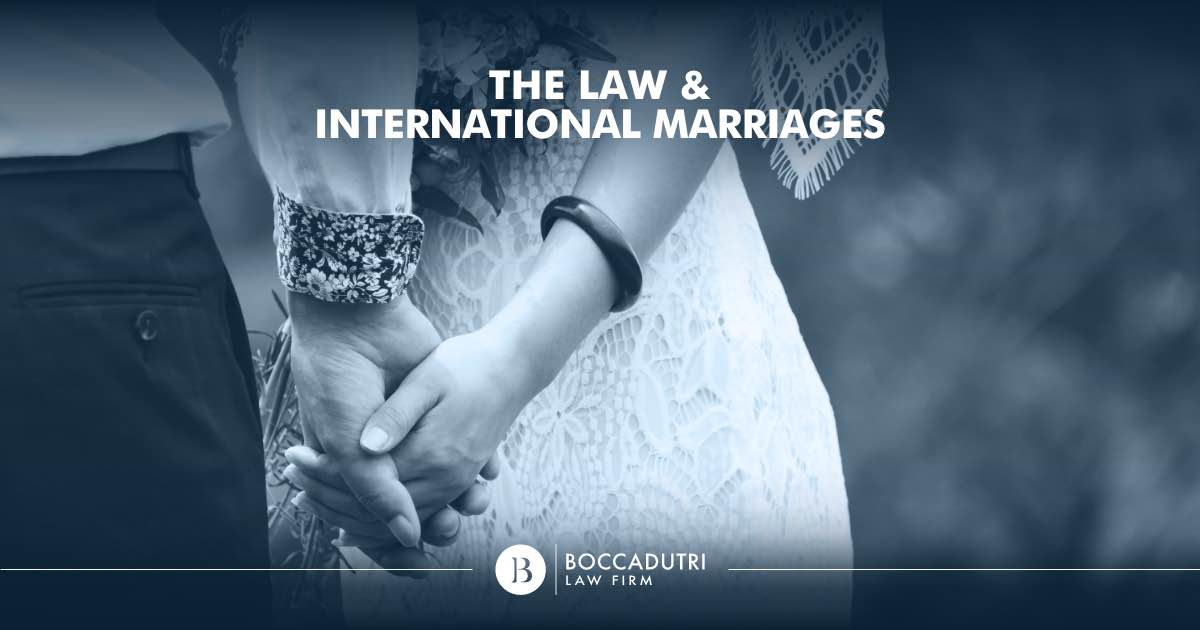 Law n. 218/1995 of the Italian system of private international law rules on family relationships concerning separation and dissolution of marriage.

The subject of family relationships, with specific regard to marriages contracted abroad or between persons having different citizenship, is regulated in Italian law n. 218 which, in 1995, reformed the system of private international law.

In order to avoid potential conflicts between Italian law and the laws of a foreign state (and also due to the increased number of marriages celebrated abroad or between citizens of different nationalities) rules have been established regarding the identification of the applicable law as well as cases in which Italian jurisdiction exists.

The general criterion chosen, both in the context of personal relationships and of the patrimonial relationships (articles 29 and 30), is constituted by the application of the common national law of the two spouses; however, in the moment in which spouses have different citizenship, citizenship recourse will be provided to the law of the State in which the married couple primarily lives.

In regards to patrimonial relationships, the law provides the right to spouses to apply to the law of the State in which at least one of them is a citizen or in which he/she resides, subject to written agreement that it will be considered valid when decided as such by the law or by that of the place where the agreement was made.

Then there are further specific rules and exceptions to the criteria identified above. With reference to marriage capacity and other conditions for contracting marriage, according to art. 27, these conditions are regulated by the national law of each of the betrothed at the time of marriage.

In the presence of these requirements, where the requirements of the lex loci (law of place) are met, marriage celebrated abroad is considered immediately valid and effective in Italy, albeit subject to subsequent transcription in Italian civil registers, which therefore assumes mere nature certification and not constitutive (whose procedure is foreseen and analytically described by the d.P.R. n. 396/2000).

As part of the personal separation and dissolution of a marriage, the same principles established for personal and patrimonial relationships applies (ie the reference to the common national law or the law where the prevailing location of family life is located); from the chronological point of view, the law to be applied will have to be identified at the time of application for separation.

Furthermore, the use of Italian legislation is envisaged where the personal separation and dissolution are not foreseen by foreign applicable law.

In terms of jurisdiction, art. 32 establishes that Italian jurisdiction exists even when one of the spouses has Italian citizenship or the marriage was celebrated in Italy.

This provision is flanked by art. 3, which establishes – as a criterion general for the existence of Italian jurisdiction – that the divorcee must be domiciled or resident in Italy or have a representative who is authorized to stand trial pursuant to art. 77 of the Code of Civil Procedure or other legal provisions.

European legislation on separation and divorce

The provisions concerning private international law are flanked by the provisions issued in the territorial area of the European Union. In particular, the Regulation of the Council of the European Union n. 1259/2010, issued in implementation of enhanced cooperation, is applied to the participating Member States (including Italy) to sectoral cooperation.

In the absence of an explicit choice, art. 8 permits the use of state law:

Italian procedural matter and the introduction of “short divorce”

With reference to the Italian procedural matter, which will be used also in the aforementioned hypotheses of marriages contracted abroad or between citizens having different citizenship- and the conditions foreseen by the law 218/1995 subsistent – we are witnessing a process of continuous regulatory evolution, of which it is opportune that every interested person has knowledge, in order to be prepared to face separation or divorce procedures; this assumes even more value in the case of foreign citizens who will have to refer to the Italian procedural law.

In a goal to accelerate the course of civil proceedings and simplifying separation and divorce procedures, law n. 55/2015, containing amendments to law no. 898/1970 which contains discipline on the subject, the introduction of the concept for ‘short divorce’ was introduced.

With the aim of speeding up the procedure for the definition of divorce, the legislator has amended art. 3 of the previous law, which results in a significant reduction in the time that is required to carry out the divorce application following personal separation – judicial or consensual.
Specifically, it is now possible to apply for divorce as a result of continuous separation for 12 months, starting from the first appearance of the parties before the president of the court; term reduced to 6 months in the case of consensual separation, even if a dispute has been converted from judicial to consensual.
The timing of divorce proceedings has seen a considerable reduction, where the previous legislation set a single minimum deadline – both for judicial and consensual separation – of 3 years.

What emerges, however, is the permanence – in the current regulatory framework – of the necessity for prior experimentation of the procedure of personal separation for the purpose of applying for the dissolution of marriage, whereas the elimination of this link could contribute to a further reduction of time aimed at divorce finalizations.

The procedure for obtaining a divorce is therefore still separated into two distinct phases, namely the preliminary mandatory separation period and the subsequent phase of divorce proceedings. In the context of simplification, it is worth emphasizing the introduction of new forms of separation and divorce that are alternative to the judicial process, such as negotiation assisted by lawyers and/or the conclusion of an agreement with the Civil Status Office under certain conditions (as per Articles 6 and 12 of Decree Law 132/2014 converted with amendments from November 10, 2014, No. 162).
As for the identification of a competent judge, based on the provisions of art. 4 who intends to submit an application for the dissolution or termination of the civil effects of the marriage must refer to the court identified in the place where the spouses last reside or, failing that, in the place of residence of the agreed spouse.

If the latter is untraceable or is residing abroad, the competent court will be that of the place of residence or domicile of the appellant; finally, the application can be submitted to any court of the Republic in the event that the claimant is not resident in the State.

If you are interested in exploring the subject further, do not hesitate to contact the expert lawyers of the Boccadutri International Law Firm.