The law for vehicular homicide: unsatisfactory and ineffective 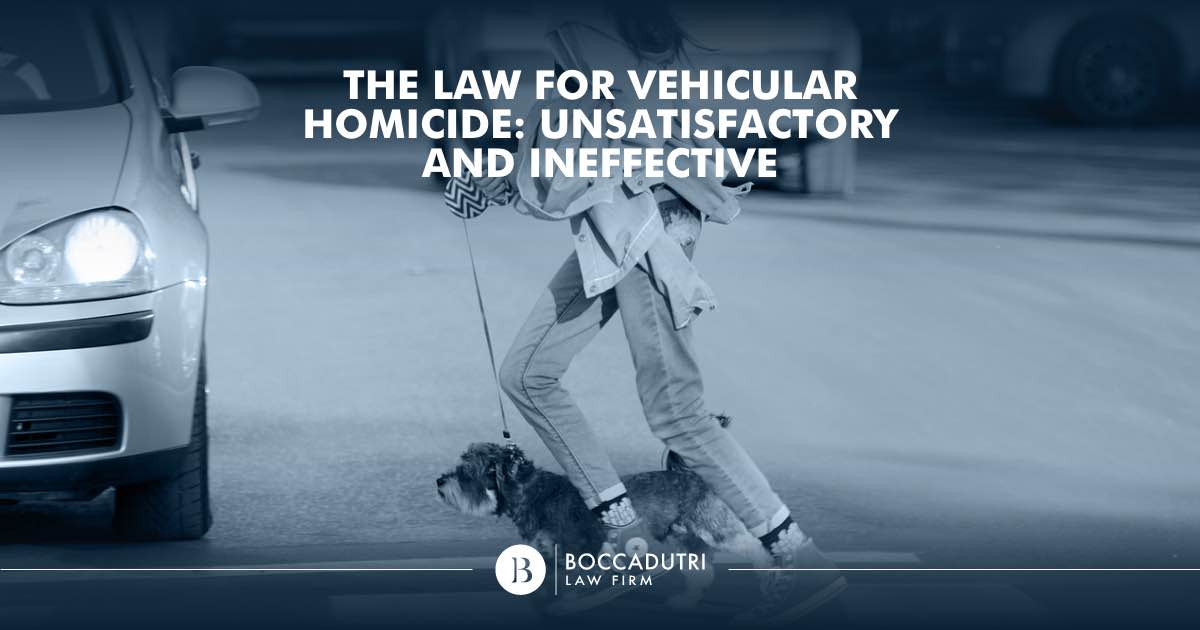 The law for vehicular homicide.

Just a few months from the introduction of the conviction for vehicular homicide, the number of hit-and-runs and casualties is on the increase. The law punishes but does not prevent the reckless conduct that is happening.

A new law for old habits

On 25 March 2016, vehicular homicide was made a crime. The Italian population is troubled by the high number of images of victims of fatal road accidents.

For years the relatives of those who lost their lives in road-traffic accidents, grouped together in associations, quite legitimately called for a law that would punish someone and, in so doing, make an example of them, were they to cause a fatal accident. The current government responded by spouting a ruling on the subject that went a bit too far, and is therefore unlikely to be effective.

In fact, a few months later, the law’s failure is already clear. It has not ended up acting as a deterrent and, even worse than that, has caused more problems than could have been realistically expected.

Criminal Negligence has gone up 20%

When negligent conduct is punished as if it were intentional, you of course cannot hope for the crime to be prevented. Negligence has in fact increased by 20%, a percentage that proves the failure of the fundamental intentions of the law on vehicular homicide.

After two days, according to science, the effects of a joint have dispersed even if traces remain in the blood, for the new law these traces can lead to up to twelve years behind bars. According to the same principle, a minimal alcohol level could cost you up to ten years in prison.
In case of contributory negligence with the victim of the incident you can wait for as long as two and a half years. Alcohol and drugs cannot be the determining factors of an incident, in case their effects are exhausted.
A reckless driver who drives in an illegal manner must be punished for his own conduct and made an example of; the unfortunate person involved in the crime however should not be criminalised.

It is not difficult to imagine how the failed distinction might have led to the rise in so-called hit-and-run drivers, that is to say those that drive away from the place of the accident without dealing with the victims.
There was already the terrible habit of doing this when you were certain of punishment, how can a law that exacerbates the punishment manage to prevent it? Indeed, it does not work, just as it does not reduce the number of incidents, or casualties, which have gone up by 16.9% from March to today.
The number of deaths has not changed either, which constitutes another failure.

The council could declare the law unconstitutional

In fact, the council could end up declaring the law unconstitutional, as it has already done in the past for laws created with similar premises.

The real contradiction is that those who cause the death of someone after drinking or taking drugs, in contexts different from road-traffic accidents, continue to be judged in terms of manslaughter.

Prevention is better than punishment

The Research centre of the Associazione Sostenitori Amici Della Polizia Stradale (ASAPS), which has released data on accidents, predicts that by the end of 2016 we could have a complete picture, but already estimates that more than just to severity, the law is moving towards justice.
To bring down the number of accidents, it is the evaluation of the ASAP, one law will not be needed in these terms, but more officers would be needed, active on the street day and night, to verify the lucidity or state of drunkenness of the driver, to prevent them from using electronic devices at the wheel or to check that seat-belts are worn. These officers would be on the lookout before incidents actually take place.

Prevention of accidents can and must be done, learning from the mistakes of the past.
Drivers, vehicles and roads must be controlled, before they come together to lead to catastrophic consequences. A police officer that stops a drunk person before they get onto the motorway has already saved more lives than a law that would mean ten years in prison.
A road in good condition does not favour , and the same goes for vehicles.

If you (or someone you know) have been involved in an accident with serious consequences, do not hesitate to contact our Personal Injury lawyers who will be able to fully inform you on current legislation and assist you.
Please fill out the online request form here.

Driving on Italian with an overseas licence is prohibited.