The FBI against Binary Options: the scams are being reported 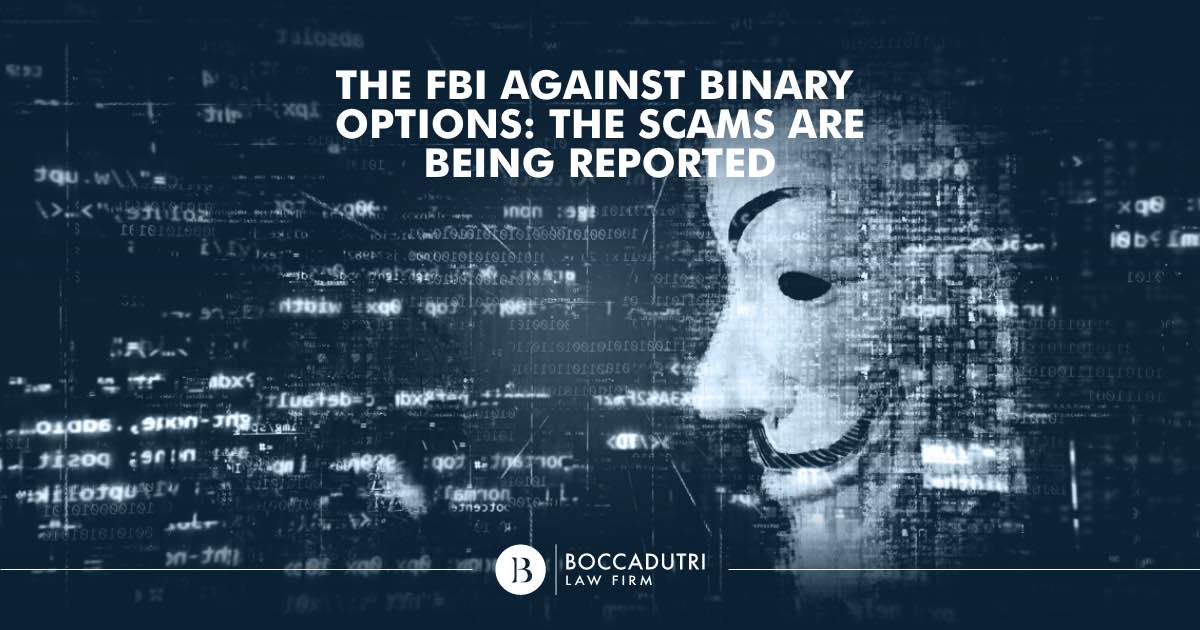 On the FBI’s website one can find a series of tips for those who are victims of binary options’ scams.

On their site the FBI has warned of fraud conencted to business in binary options. Such a stance reveals the actual situation of this business area of Forex.

When an investment becomes a bet with two possible stances, a correct guess or a false guess, it seems that speculation always becomes an obbligation and so an attempt is made to transfer the money from the pockets of those who have a weakness for betting.

The problem is not the binary options as such, because in the end they are a financial product like any other.
So, where is the fraud? Those responsible for many of the binary options websites have as their sole aim the removal of the investment.

When a person invests in binary options they know that one can earn large sums of money in a short period of time, but they should also be also be aware that they are running the risk of rapidly losing everything.
The problem is when the honesty of the person who invests does not match that of the broker.

The websites that trade in binary options are denounced by the FBI if they are not regulated by bodies like the CTFC (United States Commodity Futures Trading Commission), the American government agency, as they can be used to committ crimes.

The number of binary fraud options

The numberss of binary fraud incidents are on the rise. In 2011 the IC3, the Internet Crime Complaint Center, connected to the FBI received only four allegations related to cyber crime related to binary options, with a total loss of just under 20,000 dollars.

Five years later hundreds of such allegations were reported and the estimate of the losses seem to have been millions of dollars.

Furthermore, as reported to the IC3, the real scope of the phenomenon is even worse than these figures demonstrate, because many victims do not report these crimes.

These incidents are often not reported as a result of shame, a shame of the losses that correspond to the irressistible figures, or even because they did not even realise that the money had beeen deducted in a fradulent manner. In Europe the results that the related allegations of binary options consist make up 25% of all fraud allegations that are received.

The risks of investing with a dishonest broker

The FBI has always sought to outline the type of fradulent siutations which one can come across with binary options.

First of all, the difficulty of being accredited or refunded one’s own money. In these cases the broker erects a rubber wall off which telephone calls, messages or emails simply re-bound.
The clients’ accounts are frozen and the same clients are accused of bad practice so as to explain the unlawful actions.

Identity theft is also very widespread, committed by entities that have access to personal client data, and who take advantage of the money laundering regulation to obtain the data.
These entities use unlawfu improper means to obtain the data such as through using photocopies of credit cards, passports, driving licenses, and substituing them in the person’s place.

There are cases of “software manipulation” where the mangers of trading platforms re-configure the algorhythms are used to make the client lose their money. Sometimes they distort prices or modify the amounts paid, in other cases they prolong the date of expiration so that profit tunrs into loss.

What all the people who operate binary options have in common are their promises of easy money, of low risk and of a reliable service to customers.

The only defence is international co-operation

To combat binary options fraud the FBI co-operates with partners such as the CFTC, and the SEC, Securities and Exchange Commission.
In January a summit was held concerning the problem of binary options fraud organised by the executive community.
The main organisations involved were the law forces and the North-American and European regulation authorities.

It emerged from the meeting that the scammers have sophisticated means and function on multiple fronts simultaneously.
Thuus the only method for dealing with them is to join forces, so that the world of finance, the regulation authorities and law enforcement all work together.

As for the entities at risk, namely the investors, they always have remain vigil and wary before entrusting their money to unknwon people.
They must first discover more about the entities, study the business and how the operators function. This knowledge does not make all people immune to scammers, but at least this holds many scammers at bay from potential victims.
These scammers are not concerned with obtaining a license for operating their binary options business.

It is important that those that believe themselves victims of binary options report these incidents and should report too the number of times they have been victims of fraud. Our advocates are experts in forex litigation, are at the disposal of those those who wish to have advice on the subject.