The European Directive MiFID II is ready for Italy 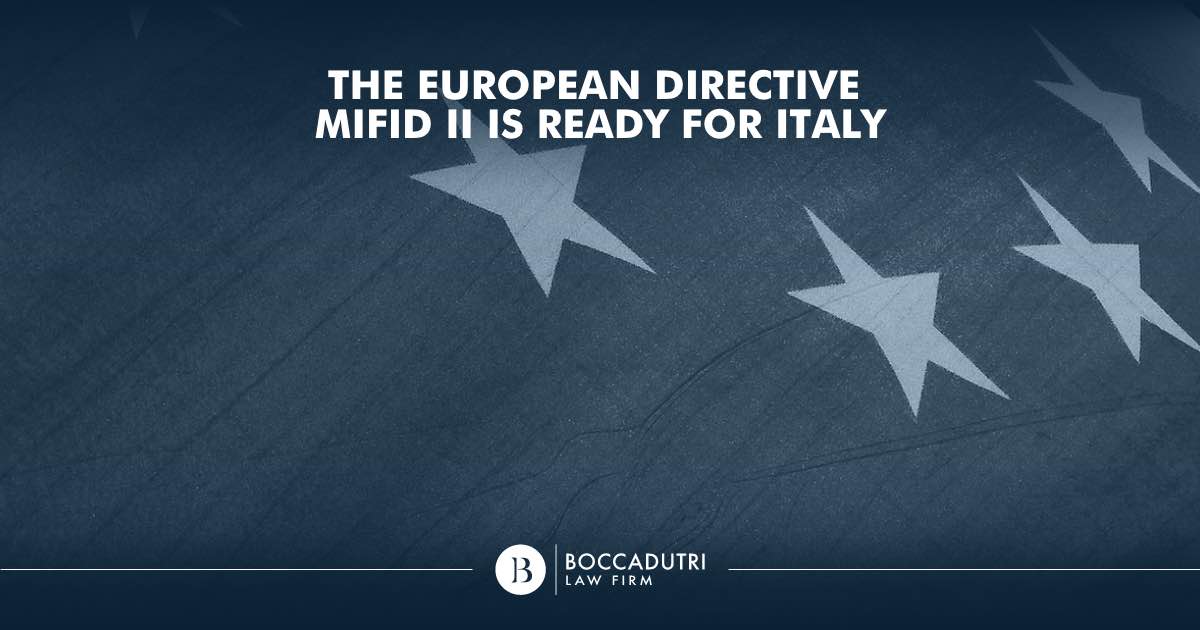 The procedure for the transposition into Italy of European Directive MiFID II, the legislation that regulates European financial services is moving forward in Parliament.

European Directive MiFID II, namely the new European regulation of markets and financial instruments, will be accepted in Italy, and in other member states, on the 3rd of January 2018.

Regarding Italy, the procedure for definitive regulations is in motion.

In actual fact, the text of the Decree Law that implements it was approved on the 15th of June by the cabinet.

Cornerstones of the directive are transparency and protection for savers.

Thanks to a series of shared regulations, savers and companies will be able to operate abroad, in one of the member states, with the same rules as everyone else.

The actors principally interested in the new regulations will be investment management companies, banks and those working in the energy and raw materials sectors.

MiFID I and its evolution

MiFID I, which accepted European directive 2004/39/CE, has been in action in the Italian judicial system since 2007.

Its aim was to create shared rulings in order to regulate the activity of financial markets in the European Union and to safeguard investors.

It has merged into the MiFID II, which the European Parliament adopted in April 2014, in implementation of the 2014/65/EU directive, and in EU ruling 600/2014, better known as MiFIR, the specific directive of the negotiation of financial instruments.

Every member state of the European Union will have to accept MiFID II by the 3rd July 2017, with all that follows it (ad hoc laws, the settlement of rulings and executive proceedings) before being able to proceed with its implementation in January 2018.

Contents of the MiFID II

The efforts of the MiFID II are oriented towards the development of a shared market of financial services in Europe.

Watchwords are transparency and the safeguarding of those involved.

What better way to safeguard clients than to give them the highest possible amount of information?

The client/investor must submit to an “adequacy assessment”, that is to say literally being put under examination. Their knowledge will be verified and taken into account with their potential previous experience in the necessary field; their financial situation will be analysed in order to clarify whether they are capable of supporting potential losses; their objectives will be evaluated to better understand the risk tolerance.

Based on the result of the adequacy assessment, the most suitable financial services or instruments will be proposed.

This sort of combination will have to happen at the birth of the financial product itself, bearing in mind the characteristics of their own clients.

No longer a “one to one” approach, in which clients are compared, but “one for all”, with a target broadened to a specific section of the market towards which the product is intended in particular.

If the single financial product is part of a group of products, the worker will have to equip the investor with the right information on the whole packet, underlining the risk profile of every single product.

MiFID II clearly points out, for those who work in the world of finance, the responsibility of guaranteeing their clients, through well-trained staff, full knowledge of the services.

Adequate training and certificates for workers are established, even if Consob (The National Commission for Business and the Stock Market) may distance themselves from the Esma (European authority for financial instruments and markets) and be less inflexible than their European counterpart.

The MiFID II, in its implementation, will have a backlash on the quality of financial instruments.

Before being sold and, therefore exhibited to the clientele, they will have to be analysed and approved by the person that introduces them. The one distributing them will, in turn, have to adjust the publication of the product according to the type of market that it is aimed at.

The system of incentives

In the MiFID II, a notable modification to the system of incentives is set out.

Businesses will no longer be able to incentivise their staff “at the expense” of the client. If the system of incentives establishes mechanisms by which one financial instrument earns more than another, the employees could favour it and present it to the highest possible number of clients, without worrying about the actual suitability of it.

The one paying for the incentive in this case would only be the unknowing user.

The MiFID II limits “execution only” marketing products, meaning products that do not pass through checks and adequacy assessments.

The MiFID had already introduced limits to distribution. The new regulation tightens these limits.

Every security authority, whether national or European, will have greater powers, the most important of which will be that of limiting, or completely prohibiting the marketing of financial instruments that are potentially dangerous for investors or for the stability of markets.

Europe, through the MiFID II, wished to provide its members with a clear, common regulation for the institution of “whistleblowing”, a legal instrument for the prevention of corruption through the reporting of infringements.

So-called whistle-blowers carry out an important role in the protection of the financial interests of the European Union since, thanks to them, illegal conduct can be limited or stopped in a timely manner.

It is a shame that they are not very widespread and not sufficiently safeguarded.

Concerning this, the MiFID II will establish a programme of protection in order to incentivise warning systems aimed at businesses, public bodies and not-for-profit organisations.

Warnings of violations may be confidential and anonymous in order to safeguard both the accuser and the defendant. If the tip-off were to be discovered, the one that effected it would be protected from all forms of retaliation and discrimination. Protective channels, dedicated to whistleblowing, will have to be opened up.

Lawyers from the Department for Forex Litigation at Boccadutri International Law Firm are available to you for any information you may require on this subject.

In the last few years, a substantial increase in fraudulent activities has been seen in the Forex market.

Encouraging investments that are unsuitable for clients, simply to increase incentives, can be considered a scam.

If you have made quick losses in Forex and the actions of the broker have seemed to you to be incorrect, do not hesitate to contact us to receive immediate help. Fill out our application form here.