The co-founder of Airbit club extradited to the USA 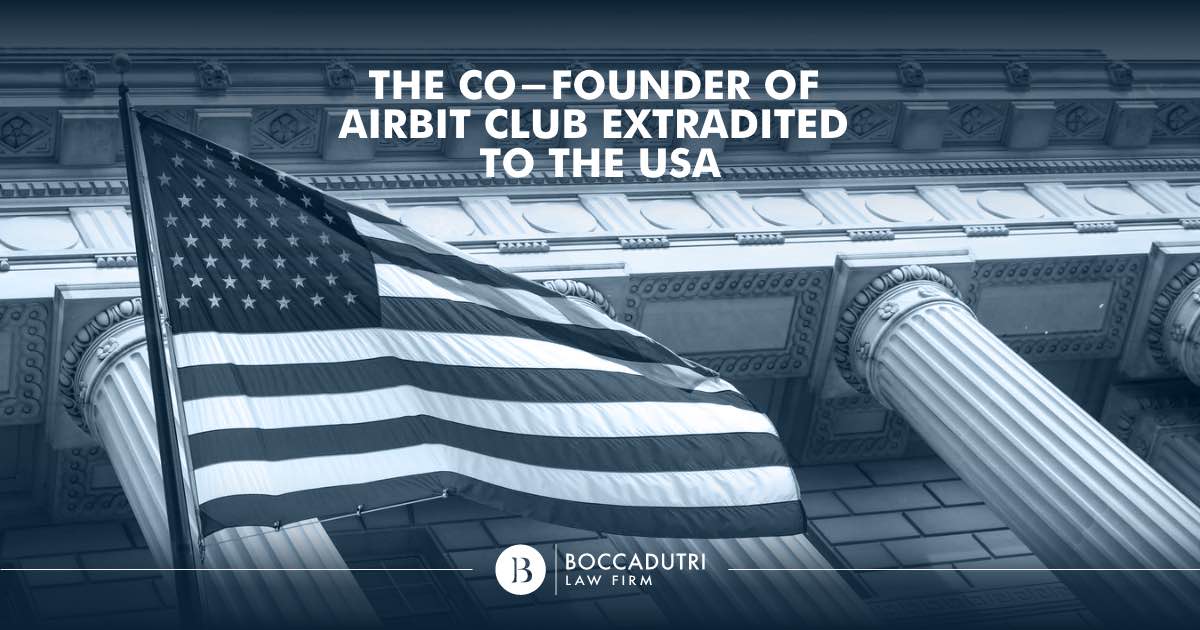 Serious charges are hanging over AirBit’s co-founder who has allegedly pocketed, and spent, customers’ money instead of investing it in cryptocurrency mining as advertised.

Gutemberg Dos Santos, co-founder of AirBit, was extradited to the United States on November 25, 2020. The entrepreneur was arrested in Panama on August 18, 2020, at the request of the U.S. Department of Justice, following a series of investigations conducted by the New York Field Office of Homeland Security Investigations (HSI). Controls on the company’s business started after complaints by some AirBit’s customers emerged, uncovering what seems to be yet another Ponzi scheme.

In August, in conjunction with the arrests of Dos Santos and some members of his staff, namely Pablo Renato Rodriguez, co-founder, Cecilia Millan and Jackie Aguilar, promoters, and Scott Hughes, the company lawyer, the U.S. Department of Justice publicized the charges against them: conspiracy to commit fraud and international money laundering.

At the center of this alleged scam is the AirBit Club, a mining and cryptocurrency trading company.

Among those arrested include Hughes, an attorney licensed to practice law in California, who represented Rodriguez and Dos Santos during a Securities and Exchange Commission (SEC) investigation, relating to another investment scheme known as Vizinov.

In addition to the five arrests made in August, another promoter, Karina Chairez, was arrested in the U.S. on Octber 20, 2020 on suspicion of conspiracy to commit money laundering, like the other defendants.

AirBit’s story begins in 2015 – the year in which it started its business. Customers were encouraged to invest cash in the AirBit Club, described as a multi-level marketing club in the cryptocurrency industry, with the promise of guaranteed profits. According to the promises made by the founders and promoters, returns would stream in automatically and passively once mining and subsequent trading of cryptocurrency began. In essence, the mere purchase of a subscription would provide them with ample and continuous earnings.

Once cash was deposited, a promoter would provide the customer with access to the AirBit Club portal to view their returns from their membership. It would appear that at that point each of them would see profits accumulate. What investigators suspect is that these profits were false.

According to the investigating officers it is a classic Ponzi scheme, where the money invested by subsequent clients covered the earnings of previous clients. This accusatory hypothesis is supported by the lack of evidence related to cryptocurrencies, which would never have been really extracted. Those investigating the facts have so far been severe and reported that there has been no mining or bitcoin trading by the company on behalf of its clients.

What would have led investors to think they were receiving gains would have been manipulations on their accounts on the online portal. A proof of this is the fact that when customers tried to cash out what they apparently owned, the misunderstandings and the impossibility of withdrawing money began. As early as 2016 there is evidence of complaints about the impossibility to withdraw money from the AirBit Club portal.

The promoters would defend themselves by citing excuses and delays, and revealing hidden costs amounting to more than 50% of a requested withdrawal. One witness accuses Aguilar of suggesting that they “brought new blood” into AirBit Club in order to receive their money. A recent allegation, from April 2020, reports how one customer suddenly found their account on the AirBit Club portal closed, resulting in the loss of their investment. The cause was allegedly an “execution of the Financial Sustainability Reserve:” a clause in the AirBit Club’s Terms and Conditions triggered by the financial crisis due to Covid-19.

There is talk of a twenty million-dollar turnover. A supposed profit paid with confidence by customers from all over the world, but which will never reach the promised destination: the creation of bitcoin which would then be redistributed to investors in other profitable forms.

Investments made by customers, the alleged victims (until the trial is concluded with convictions we cannot really talk about victims) would have been laundered for other purposes: the welfare of the co-founders and their collaborators (villas, cars, jewels…) and on “aggressive and lavish” events and marketing campaigns designed to attract new customers.

If you have been involved in ambiguous investments or if you have any doubts about how to act in possible fraudulent situations or how to recognize a Forex scam, do not hesitate to contact our lawyers from our Forex Department at Boccadutri International Law Firm.