Stress from Brexit? Doing business in Italy may be worth considering 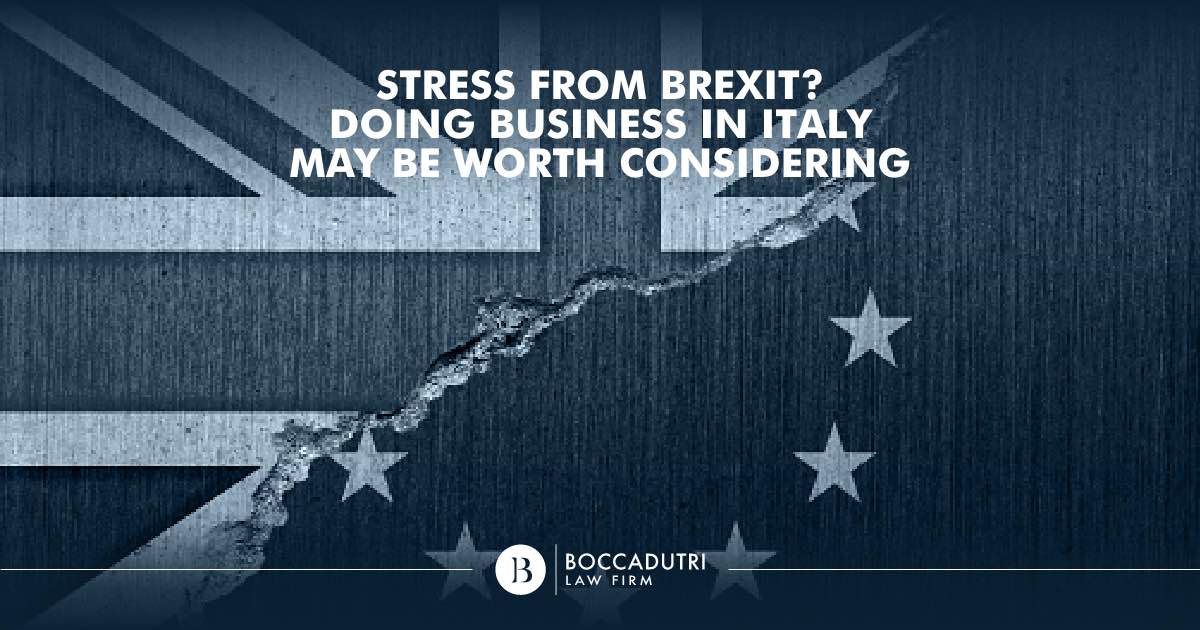 Doing business in Italy may be worth considering

Following the outcome of the recent referendum in the United Kingdom and the dreaded Brexit, an atmosphere of concern and anicipitation has been created regarding when and how the British will leave the European Union.
Procrastination can be costly, so those who do not want to wait and prefer to relocate their businesses in Italy, before the exit procedure complicates any future steps, must act now.

Brexit outside the UK can translate into opportunities. The idea being considered by the Italian government is to take advantage of the situation and create two “no tax areas” in our country, in the area which hosted the Expo in Milan and the other in Bagnoli, a district of Naples.
This would cover North and South Italy. If this comes into play it would be a great attraction for companies wishing to leave London.

Moreover, if all those who say they are inspired by London materialize the potential threats and tried to leave the European system only countries such as Italy could guarantee a certain amount of stability.

The importance of staying in an EU country is based on the fact that the citizens of any of its states benefit from the principle of free movement of persons, goods and capital, and have the freedom to settle in any country of the Union .

Transferring an established company abroad to Italy requires a precise procedural process with the assistance of a competent lawyer . The Boccadutri study offers specific advice, case by case. It is necessary for a company to have suitable characteristics for transfer and, when possible, our lawyers would accompany and speed up the procedures.

First of all, we must consider whether the initial tax and legal system allow the transfer to another country or, in the event that in such a circumstance should take place, the dissolution or liquidation.

The outgoing companies would have to adopt a shareholders’ resolution approving the transfer abroad of the company.
It would be necessary to adopt a new legal form which is compatible with those provided for in Italy, therefore the statute must be reviewed under Italian jurisdiction.
Then the initial transfer balance sheet must be highlighted to allow an assessment of the share capital to be made.

The new document, drafted in the languages of the two countries, would have to be certified by the country of departure and only then an Italian notary would evaluate it and file it within the Chamber’s records.
The documentation, the tax code, VAT number, filing the signature and specification of an electronic certificate-mail address would be completed.
For tax reasons, the transfer of a company abroad is subject to the art. 2 of Presidential Decree 131/1986.

There is another possibility, namely that of creating a new company directly in Italy.
Any physical person, citizen of a European Union member nation, is equivalent to an Italian citizen, so he or she has the same bargaining power. Nothing, therefore, forbids setting up or joining Italian companies under the same rules that Italians are expected to follow. Similarly, European companies, if they come from European Union states, may be members of an Italian company.

Freedom of movement extends to workers in the acceding countries to S.E.E. (Agreement on the European Economic Area) and EFTA, namely Iceland, Norway, Liechtenstein, Switzerland and San Marino, but also the citizens of the Vatican State.

Even non-EU foreigners can do business in Italy, but in this case there must be a distinction between those who live regularly in our country and those who do not.

A foreigner who is a legal resident must demonstrate the availability of adequate resources, if necessary, must be registered in professional bars (required for certain professions).
He or she must have obtained an authorization from the relevant authority that enables them to practise the chosen profession.

Foreigners who are not regularly resident can become a member of an Italian company if there is a condition of reciprocity with the foreign state of which he/she is a national.
The same goes for foreign companies outside the EU. We can discuss the existence of reciprocity when the foreign state business law allows Italian citizens (person or company) the same treatment to which the foreign national applies to be admitted. Reciprocity i.e., equal terms. The foreigner is responsible for providing reciprocity.

Who has obtained the Status of Refugee may constitute companies in Italy if resident for at least three years. This is the same limit for stateless persons living in our country.

The lawyers of the Boccadutri international law firm can direct you to the best solution, after careful analysis of the type of company that you want to move / create.
You can contact them by filling out the request form here or write us via email at [email protected]