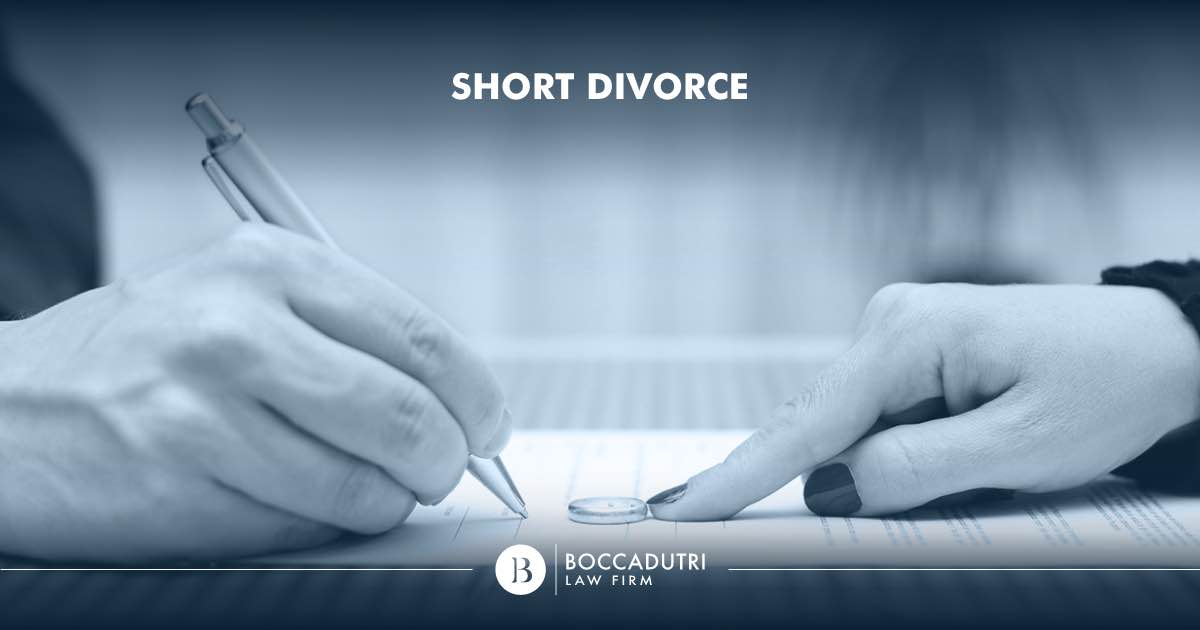 Short divorce was introduced in Italy by law number 55 dating form 6th May 2015. It is called this because it has substantially reduced the time it takes to obtain a divorce.

Short Divorce, what is it?

Short divorce does not constitute an alternative to divorce, as it had been understood until now, but it affects the duration of the proceedings for the dissolution of the civil effects of marriage.

To divorce, before the reform, a minimum of three years of separation was required, not including contingencies.

Going from three years to six months, in the case of an agreement, or to one year in the worst case, allows those who decide to end their marriage to save a considerable amount of time and money.

The evolution of Short Divorce from Easy Divorce

It must also be said that before Law 55/2015 on short divorce came into force, our country had already adopted a legislative instrument aimed at shortening divorce proceedings: Decree-Law No. 132 of 12th September 2014 (converted into Law 162).

Decree-Law No. 132 introduced the possibility of ‘assisted negotiation‘ for divorce: two spouses who are in agreement can, thanks to a law that is still in force today, apply directly to a lawyer or to the civil registrar in the municipalities, without going through the courts.

It is by this effect that Law 162 was renamed the ‘easy divorce‘ law.

The “secret” to a short divorce is to come to an agreement.

The decree on a short divorce, which entered into force on 26th May 2015, has the great advantage of allowing separation after six months, in the event of a consensual decision.

Hence, in the space of a few months, the dissolution or termination of the civil effects of the marriage may take place.

The timing of a Short Divorce if you choose judicial separation

In the case of judicial separation, if the two spouses cannot reach an agreement and decide to go to court, a divorce can be requested 12 months after the moment parties appear before the presiding judge.

Calculating the time for a Short Divorce

The Short Divorce procedure changes depending on how you choose to end your marriage.

A divorce by mutual consent will encounter fewer obstacles and bureaucracy than a judicial divorce.

The short divorce procedure with court hearing or joint hearing

Six months after the separation by mutual consent, or one year after the separation by court order, the divorce procedure can begin in court, or joint proceedings. A ‘joint application’ is filed with the court, i.e., the spouses file a single document together outlining the agreements made between them on the divorce. However, the presence of a lawyer, who may be the same for both, is necessary.

The court sets the spouses’ hearing with the presiding judge.
The spouses appear at the hearing to confirm that they wish to proceed in accordance with the agreement expressed in the document deposited, and to refuse the mandatory attempt at conciliation.

The agreement is forwarded to the Public Prosecutor who accepts it.

The judgement, which has become final, is transmitted by the clerk of the court to the civil registrar of the City Council in which the marriage was registered.

This type of procedure is preferable for those who have decided to agree on a lump sum payment.

One of the spouses contacts a lawyer who, once instructed, writes a letter to the other spouse, who must be assisted by his or her own lawyer, and invites him or her to enter into the Agreement, i.e., a contract setting out how future negotiations will take place, i.e., where and when to meet, how often; all within a period of not less than one month and not more than three months.

Once the invitation is accepted, negotiations begin, aimed at reaching an agreement on the terms of the divorce.

If the Public Prosecutor, to whom the document with the terms of the divorce is submitted, considers that the content is not in the interests of the children, he may block it, but not amend it, or he may refer the parties to the court.

It is up to the spouses and their lawyers to resubmit a document appropriate to the situation.

The assisted negotiation procedure ends with the transcription of the divorce agreement in the marriage register.

The Short Divorce procedure in the Commune (municipality)

Divorce proceedings in the municipality (Commune), before a civil registrar (the mayor or his delegate) can be carried out if an agreement has already been reached on the assets and personal affairs following the divorce, if there are no minor children or in any case children who are not independent, and finally if there are no possible transfers of property.

Although it is optional, the assistance of a lawyer can always be requested.

The spouses submit an agreement, signed by each party, to the municipality.

The civil registrar receives them and invites them to reappear after a minimum of thirty days from the first meeting, to confirm their willingness to divorce and the time limits for doing so.

The divorce agreement is ratified and transcribed in the marriage register.

When there is no agreement on the terms of the divorce, or when only one of the spouses applies, the divorce can proceed.

While any one of the divorce proceedings can be chosen for a divorce by mutual consent, there is only one procedure for a contentious divorce.

Each spouse must be assisted by his or her own lawyer. It is not possible to have the same lawyer.

Although it is not compulsory to do so, usually, the lawyer of the plaintiff (the spouse initiating the divorce proceedings) writes to the respondent (the other spouse), to inform him or her of the initiation of divorce proceedings and to try to find a mutually agreed solution. Once the last attempt to reach an agreement has failed, the same lawyer draws up a document, the appeal, and files it in court.

The summary (or pretrial) phase begins when the spouses are summoned to court.

This is the moment when the presiding judge takes the first decisions concerning the couple, in particular regard to protect any children.

It concludes with the appointment of an investigating judge to follow up the proceedings.

The preliminary investigation phase begins, a series of hearings that serve to acquire information useful for the final decision (evidence in support of the request for custody of the children, data on the extent of the economic resources of both parties, testimonies etc).

Based on the information gathered, the judge will have to produce a document, the divorce decree, which sets out the conditions of the divorce.

The Clerk passes the file to the civil registrar of the Commune (municipality) in which the marriage documents are located to register the divorce.

The necessary documents for Short Divorce

The documents required to obtain a short divorce are:

Early dissolution of joint property thanks to the short divorce

According to Article 2 of Law 55/2015, joint property ownership is dissolved as soon as the judge orders that the spouses may live separately, or once a separation by mutual consent has been signed.

Previously, it could only be dissolved when the separation judgment became final.

The procedure: it is the clerk of the court who communicates the order by which the parties are authorised to lead unmarried lives to the civil registrar so that the dissolution of community is approved.

No consequences of the short divorce on property matters

The Short Divorce Act did not provide for any changes in the patrimonial aspects resulting from separation and divorce.

Assessments of allowance amounts, and allocation criteria are still the subject of rulings by the Supreme Court of Cassation. Which, while deciding based on the individual situation submitted to it, also follows a logic dictated by changing times, which goes beyond individual laws.

Our Family Law Department lawyers will be able to follow you through the separation and divorce process, answering and clarifying any questions or doubts that you may have.