Secure holidays with the hotel contract 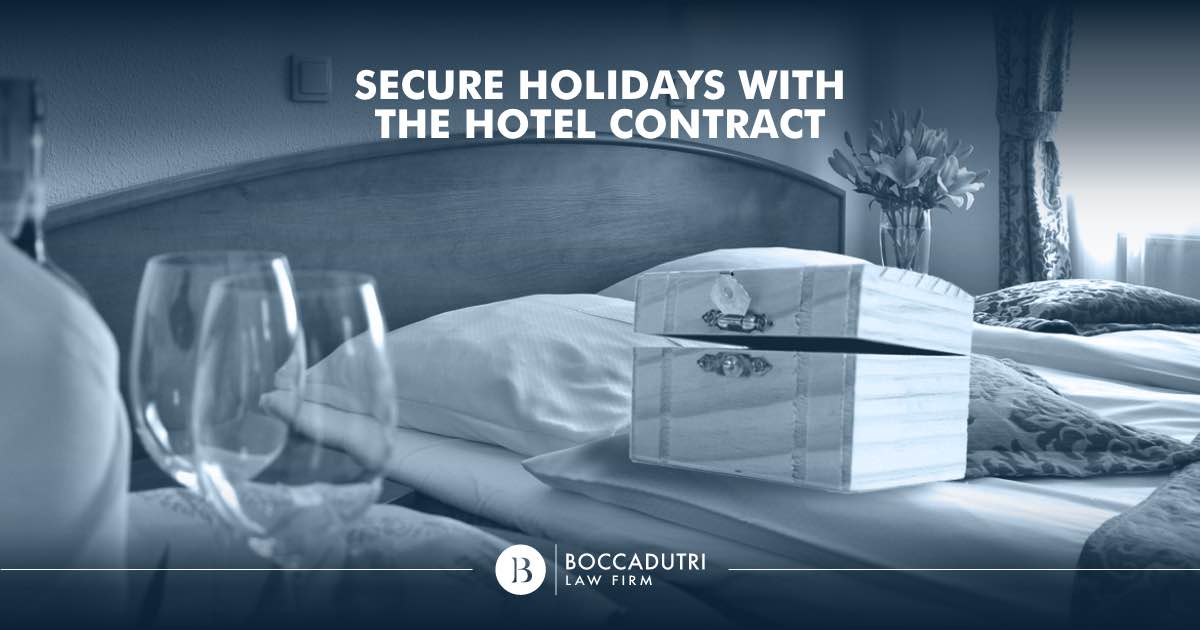 The hotel contract is a particular contract that specifies the obligations and rights of hotel owners and their guests. Based on this you can be clear on rights and wrongs when, during the trip, accidents happen.

Current legislation does not make provision for any regulations that expressly define the contract between guests and hotel owners, while a legal report, called the “hotel contract”, has come into effect. Only a few assets are regulated by this law.

It concerns a particular contract, in which some of the obligations and rights of the parties involved are specified.

According to this agreement, the owner of the hotel is obliged to provide for the client, after the payment of the agreed price, a residence, guaranteeing its cleanliness and security, both for the people and the luggage that they bring with them.

For those who choose to stay in a hotel during their holiday, it would not be a bad idea to bear in mind what the law dictates to safeguard a stay in an accommodation organisation.

The international hotel regulation has been protecting travellers since 1954.

Originally we find the legislation in effect in the country in which the hotel is found, the internal ruling of the hotel, and international ruling.

The obligations of the hotel owner

When you choose a hotel you expect that staying there will be a pleasant experience, but in order for this to be possible you must feel, and be, at ease. The owner has a duty to guarantee the safety of its clients during their stay.

Obviously in order for the guest to be protected in the best way, they themselves must be wary of the risks by adopting a cautious and levelheaded approach. Otherwise it can be up to the owner to account for the damages committed to them through carelessness, for reasons of a force majeure, which exclude and diminish the responsibility of the residential organisations. There are also exceptional cases that should be evaluated individually.

The hotel’s responsibility is not limited to the people but also to the things that they bring with them.

The civil code, art. 1783 and what follows, regulates the obligation to conserve goods and customers.

Hotel owners end up being responsible for damages, destruction or theft that people that bring with them into the hotel. This is also the case if the object in question was not expressly entrusted to them. It is then up to the client to prove the extent of the damage done.

It is useful to know that signs in hotels indicating that the responsibility for objects left in the room or elsewhere in the hotel is the guest’s have no legal value.

Article 1784 attributes to hotel owners an unlimited liability in case something is entrusted to them or if they should refuse the safeguarding of valuables, cash or precious objects, for which a duty of protection is owed.

Only if dangerous, awkward, or excessively valuable objects in comparison with the hotel’s resources are involved, can the hotel owner be relieved of the responsibility of accepting them.

The hotel contract is clear about the fact that the hotel owner must safeguard the client and their possessions.

If something happens to either of these, the position of the hotel owner can be relieved only by the client’s incorrect behaviour (or of those accompanying them), thanks to a force majeure, or by the nature of what is being guarded, since it might suffer a natural deterioration.

Responsibility for clients’ vehicles, and for what is left inside, reverts to parking contracts as long as a fault on the part of the hotel owner or their associates is not revealed.

The client, in order to protect their own interests, must report damage to the hotel owner as soon as they are aware of it, ideally before leaving the organisation.

Fundamentally, accommodation is provided for the overnight lodging of the traveller, for whom the bill must be calculated by the number of nights spent in the hotel, regardless of the time of arrival or departure.

If the client had to use the room for a few hours, it equals the minimum payment of one night.

Unless, of course, there have been different agreements made between the parties.

The hotel contract also establishes duties for the client, which means the payment of however much is agreed (or how much is laid out by the tariffs shown in the organisation) and the respect of the rules of the hotel.

In case of damages caused to the organisation, the client is obliged to pay compensation.

If damage is done inside the hotel, the client would have to show the causal link between the damage suffered and the “thing being held” by the hotel organisation.

For this reason the Court of Appeal, clause no. 12419/08, rejected the compensation request for a fall in a hotel shower, because the shower itself did not prove to be dangerous.

Failing a causal link between the fall and the place of the fall so as to justify the hotel owner’s fault the Court did not consider it necessary to condemn it.

When a booking is made, it is always good practice to keep written proof of how much is agreed upon with the hotel owner, either by email or fax, in order to be sure of your rights in case of inconsistency between agreements made and what can be found on the website.

Hotel owners are supposed to exhibit their price plan for their region and to show it very visibly in the organisation.

In case of an early departure, the hotel owner can charge for one night, (but could reach up to a maximum of 3), plus, potentially the previous days.

When the customer does not pay

If the customer refuses to pay, the manager of the hotel can report them for fraudulent insolvency, art. 641 c.p. The client can decide to leave without waiting for the arrival of law enforcement.

Holding them back against their will would make the creditors guilty of kidnapping.

Once the person was identified before granting them the room, the hotel owners should have all their data available to them to recover the credit in a civil court, or through a criminal complaint.

In Italy, article 2760 c.c. is in effect for clients’ credits, according to which the hotel owner enjoys the “right of preference” on the things brought to the hotel, including potential motor vehicles parked in the hotel car park) on which a right of retention can be exercised even in the presence of rights enjoyed by other creditors of the insolvent client.

This credit, however, is applied after six months (art. 2954 c.c.). If the hotel owner however shows that the payment did not take place the prescription is invalid.

The international Code of Conduct relating to contracts between hotel owners and travel agencies.

If you choose accommodation from a distance, once you have reached the hotel you expect to see the exact room that you chose.

If this does not happen, and the hotel owner does not make the room agreed upon with the travel agency available, they must bear the cost of finding one in another nearby hotel organisation, paying any potential price difference and transfer costs.

Whilst waiting for the client to arrive, the room that has been booked should be available at least from 15:00 until 18:00 on the agreed day, the client’s failure to show makes the room available again to the hotel, while the client is supposed to pay the cost of the room for a minimum of one night up to a maximum of three nights.

On the day of departure, the client should leave their room by 12:00, unless agreed otherwise.

If you have been a victim of an incident during your stay in a hotel or if the hotel did not respect the agreement made before your stay, thereby ruining your holiday, do not hesitate to contact our Personal Injury Lawyers, who will be able to clarify any doubts you may have about your rights in any given case.