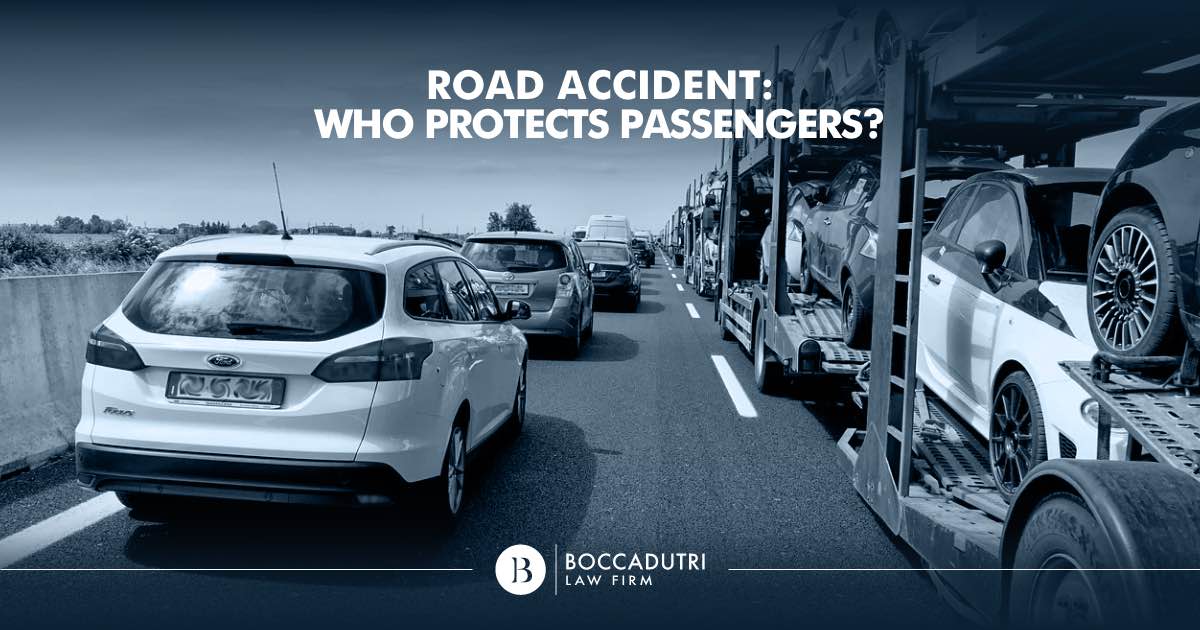 Drivers are covered by their respective insurance companies, but to whom can passengers involved in accidents turn to?

In the event of an road accident the front seat passenger or the rear seat passenger, having reported an injury or damage to something of their property, can obtain compensation quickly and this is independent of whether they have been transported for free or for a fee.

Who pays for the injuries that the passenger has sustained

Irrespective of who appears to be responsible for the accident, it is up to the company that insured the vehicle in which the passenger was travelling in when the accident occurred to provide compensation for the injuries sustained by the passenger.

Mandatory insurance in fact includes responsibility for the injuries sustained by passengers. To establish this, there is the legislative decree 209/2005, in particular article 141 of the Code of Private Insurance.

The procedure that is activated in this case favours quick compensation for passengers.

When the legislative decree n. 209/2005 came into being it was subjected to accusations of constitutional illegitimacy, accusations then rejected by the Constitutional Court via Ordinance no. 440 from 23rd December 2008.

The court declared that the legislation was limited to “strengthen the position of the passenger, considered a vulnerable subject, legitimising direct action against the insurance company of the vehicle, without removing the possibility of asserting their rights resulting from the obligatory relationship that stems from the responsibility of the driver in causing the accident.”

How to make a claim

The rear seat passenger has the right to direct compensation (act 148 of the Code of private insurance) that shall be established following one’s request for compensation via a registered letter to the insurance company of the vehicle in which one was travelling in at the moment of the road accident.

In the request the proper data will have to be reported, there will have to be (personal data and income) the description of the accident, the alleged extent of the damages sustained, their availability (in terms of dates and times).

One should receive a visit from an expert that should assess the extent of the damages, medical certificates that report their physical conditions, covered by compulsory social insurance (INAIL…), the family status if the heirs are to apply if the passenger has been a victim of a fatal accident.

The insurance company, once having received the documentation, has 90 days to respond.
It has a duty to convey the compensation anticipated, or the reasons that they cannot accept the request for compensation. If the rear seat passenger has sustained damage to items in their possession, the deadline for a response from the insurance company falls to 60 days.

Before the insurance company proceeds with their proposal (or with the refusal to carry it out) they usually send an expert or a doctor, on the basis of the nature of the consequences reported following the accident, that can value the real damage caused by the accident.
The passenger cannot refuse to be subjected to checks, if they do it the 90 days would be suspended and would lose any protection in the eyes of the judge.

After the response from the insurance company

Once the compensation offer has been received, the claimant can accept and receive as established within 15 days, or refuse it and receive the amount offered , in the form of an advance of further future compensation.

The insurance company shall pay the amount established within 15 days also in the event of a missing response from the part of the injured person.

If the insurance company do not express the terms provided by law, the injured person can appeal to the judge or attempt an assisted negotiation with the use of a lawyer D.L n. 132/2014).

The view of the Supreme Court

It is necessary to specify that the rear seat passenger does not have to provide the circumstances of the incident in which he or she was involved, but to obtain the compensation one has to demonstrate having suffered an injury as a result of the incident.

This is established by the Supreme Civil Court section III, sentence 13/10/2016 n° 20654: “the rear seat passenger has to prove the incident and the link between the incident and the damage for which compensation is sought.” In the past the stance taken by the court as been clarified by the sentence n.16161/2015: “as required by article 2697 c.c., it is up to the rear seat passenger, who goes to court, according to D.Lgs. n. 209 del 2005, art. 141, to obtain compensation for damages, to demonstrate this last point, but also to provide evidence proving the link between the accident and the injuries for which one asks the compensation for.

A request well compiled results in rapid and fair compensation, thus it is always advisable to turn to lawyers knowledgeable in the field such as the professionals at Boccadutri International Law Firm. One can contact them here for any information or clarification.