Rejection of Visa Application, What to do? 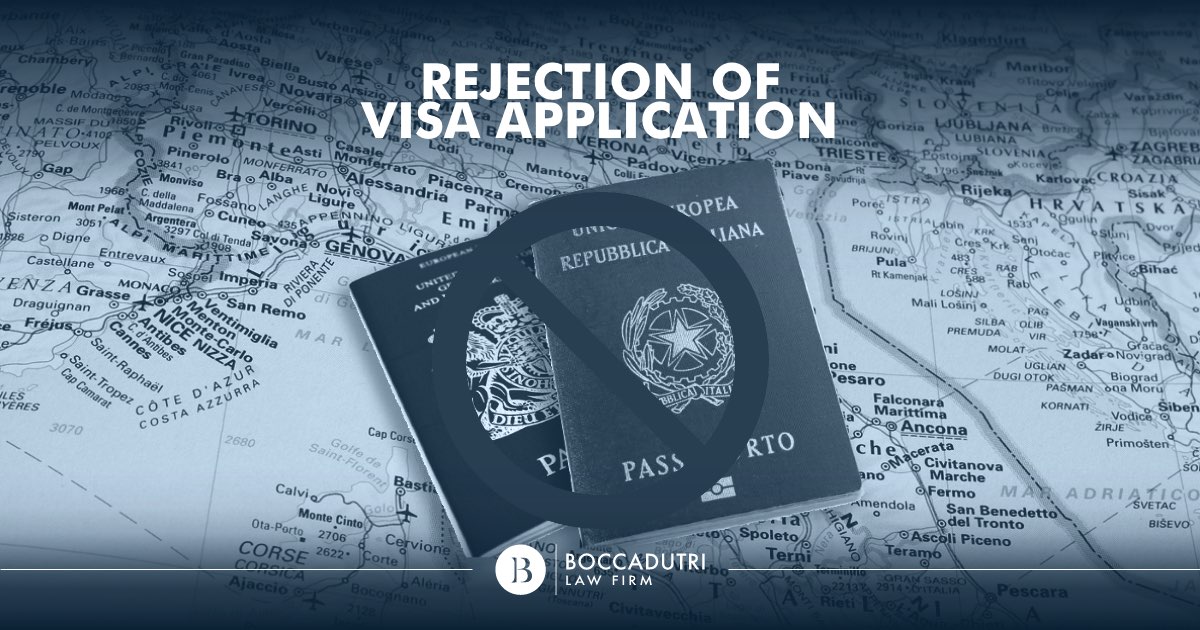 You can appeal to the refusal of the visa by applying to the administrative court for the annulment of the action. Visas are denied to more people than one would imagine, and for a wide variety of reasons.

Not only convicted or subjects to terrorism, the rejection of a Visa application is not a “privilege” of those with some skeleton in the closet, but a mistake that could happen to anyone, and there isn’t always an actual explanation, as most of the provided  reasons contain generic formulas, always identical, random and pointless.

Experience tells us that Italian diplomatic representations can deny visas and create inconvenience for unsuspecting travelers where there would be no reason to do so.

When the Visa can be refused?

A visa should be denied to anyone who:

It is important to clarify any doubts about whether you have been entered on the SIS lists.

In fact, if you suspect that you have been reported to the Schengen Information System, SIS, an additional step will be needed.

The SIS contains information on people wanted by the police or the courts, or believed to be missing, who are prohibited from entering the Schengen area unless they clarify their position first.

Everyone has the right to know whether data relating to them are processed in the SIS, and if so, to access these data.

Based on the information relating to one’s name, one can find out whether he/she is on their lists, for what reason, in which states in particular, and which Authority issued the alert, even if this information may not always be available.

It is important to understand from which authority the alert was issued, as it must be contacted to challenge its actions.

Once you are certain that you are on the SIS list, you have the option of requesting corrections, or asking to be removed from the lists because you possibly have no title to be there.

Not only peoples, but also objects, allowed the competent authorities to take specific action against the people holding them.

An application for access to data entered in the SIS may be filed with the competent authority of any of the Schengen States.

The SIS (Schengen Information System) is a computer network, provided for and governed by Title IV of the Schengen Convention of June 14, 1985, consisting of national databases linked to a central database based in Strasbourg, which contains the data entered by each Member State of the Convention for the purposes provided for therein, namely the control of migration.

Migratory risk is, arguably, the most plausible, and obviously, the most contested and questionable reason for denial.

The alleged risk is that, once a visa, and thus free access to Italy has been obtained, the applicant will no longer return to his or her country of origin, allowing the document to expire and turning out to be an irregular migrant.

A contradictory denial, since the prerequisite (Sine qua non) condition for obtaining a Visa to enter the Schengen Area is in itself a deterrent to this type of situation: together with the application it must be demonstrated that one has a deep-rooted link with his/her own country, and has the availability of financial means to guarantee one’s livelihood during the stay, as well as the return to the country of origin or residence.

If the denial of a visa is justified by these reasons, the person may contest it by demonstrating that he or she has deep-rooted ties to his or her country of residence, and then may present documentation of his or her economic, working, personal and family situation.

He will be able to show that he has valid reasons for wanting/needing to return home, in a regular situation, rather than settling illegally in another country.

The EU Commission of 19.3.2010 identified the following individual stability indices to “test” the visa applicant’s intentions:

If these checks are not sufficient, the Commission could assess the following additional risk parameters:

Denial of Visa for family reunification

A denial of a family reunification visa should be contested in the ordinary court of the place of permanent residence, not in the Tar, as it touches on the right to family unity.

It is always important to clearly specify the purpose and conditions of the stay, the availability of means of subsistence, the type of accommodation, and the possible invitation from an Italian resident (Italian or legally residing foreigner).

The denial can be challenged, through legal assistance, at the Lazio Regional Administrative Court.

The denial of a work visa, whether self-employed or subordinate, can be challenged before the Regional Administrative Court, since it is a legitimate interest and not a subjective right.

Usually this type of visa is denied if there are doubts about the authenticity of the work contract, and if there is a suspicion that it is actually just a pretext to move to Italy and stay there illegally.

In some cases, the denial stems from the lack of available quotas for the entry of additional foreign workers or, simply, if there are flaws in the documentation submitted.

To appeal, having the knowledge that you meet the requirements, you need the help of a lawyer to submit the application to the Lazio Regional Administrative Court ( TAR of Lazio ).

To summarize: if you have been denied a Schengen visa or a national visa, (whose application was not made for family reasons), you can appeal, through a specialized lawyer, to the Lazio Regional Administrative Tribunal (T.A.R of Lazio), within 60 days from the date of notification of the denial.

If you were denied a national visa for family reasons, you can appeal, always through a lawyer, without time limit, to an Ordinary Court.

Opposing the rejection of the Visa: the importance of the Lazio TAR

One can oppose, if one is aware of having been the victim of an unjust measure, by making an urgent appeal, to the Regional Administrative Tribunal, or TAR, preparatory to what will later be done before the administrative court, whose task it is to order the annulment of the measure.

The Regional Administrative Court of Lazio, called into question, once it had assessed the practice as illegitimate, has always been in favor of suspending the denial.

We can cite as an example the sentence 5420/2017, of the Third Section of the Regional Administrative Court Lazio, which upheld the appeal filed by a Pakistani businessman against the denial of an entry visa for business purposes, issued by the Italian Embassy in Islamabad.

According to the TAR, the denial must be based on actual reasons, regardless of whether the law provides for exceptions to the obligation to state reasons (set forth in Article 4(2) of Legislative Decree No. 286/1998). This possibility (of not giving reasons for denials) cannot legitimize the administration to act arbitrarily.

If there is a good reason to deny the Visa, the denial may not be justified, it is then up to the court to verify the legitimacy of the measure.

The administrative court in that particular case, considered that the “migration risk” feared by the embassy, was not adequately justified, as it referred only to previous denials.

Over the years, we have assisted clients who have been refused visas for various reasons, even professionals, socially and actively engaged in their own country, eager for a short vacation in Italy, mistaken for “threats to public order.”

Suspicions born from homonymous or particular distrust of the countries of origin, which cannot be justified by the documents produced.

The fact remains that you end up on the lists of undesirables without being aware of it, until you apply for a Visa, and from that moment begins a long process to regain your sacrosanct right to travel.

What we are trying to do, as an international law firm, is to speculate the reason behind the denial.

We study the documents, and if the conditions are met, we file a precautionary request to suspend the denial order, considering the urgency.

At the same time, we file an application for access to the SIS database in order to check for any entries to the client’s detriment, and if so, we request their cancellation.

Legal assistance will be provided by us throughout the course of the judgment, until the Judgment is rendered.

Our Immigration Law Department deals with appeals if you are refused a Visa.