Reclaiming passports during the extradition process 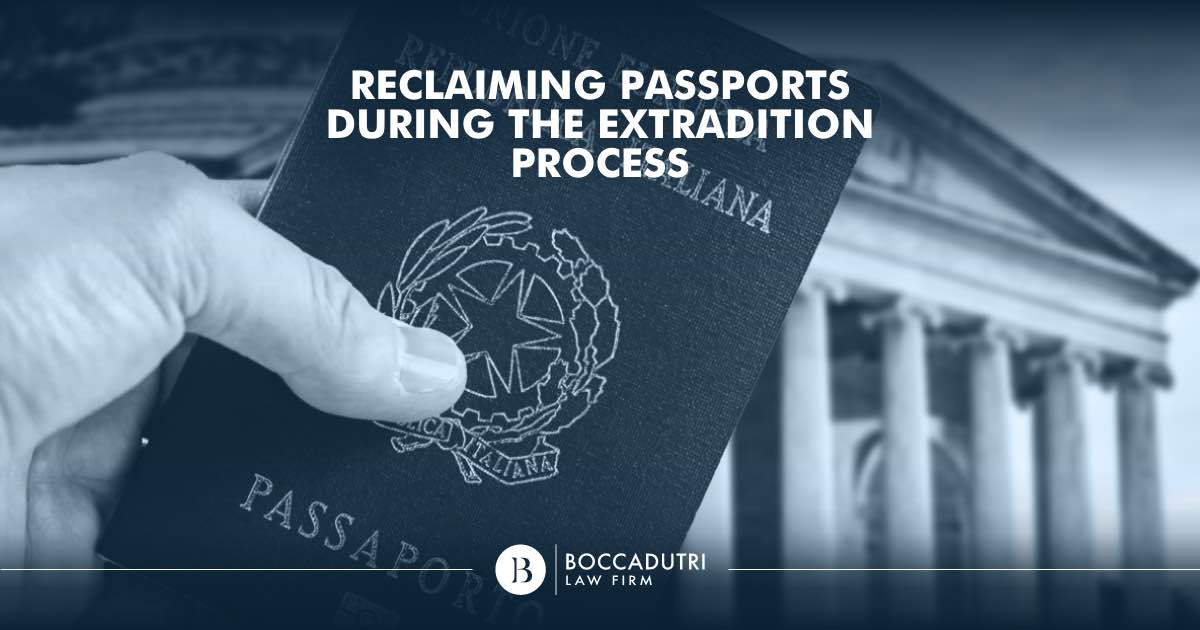 When there is an international arrest warrant for an individual, whilst waiting for extradition the individual is deprived of their passport. If the precautionary period lapses, you only have to ask to re-acquire your passport.

Not all those for whom an international arrest warrant is issued should be considered criminals.
The investigations that follow the detention serve to ascertain just that, namely if the detentainee can be considered a danger to society.

The granting of extradition shall be subject to verification of the charges and of the possible consequences of being trasnfered to the country that has made the request.
If the charges are not considered crimes in Italy, or if the transfer could result in unqual or inhumane treatment of the individual (or in the worst case scenario, the death penalty) our country will refuse to deliver the person.

The other possibility is that despite wanting the arrest upon receipt of the notice that the wanted individual was detained, the country that has sent the request does not send the necesary documents that validate the detention and agree to the extradition in time.
In this situation the detainee will have to be released and will have to be given back their passport given that they have fallen short of the precautionary requirements, the detainee will be free to even leave the country if and when they wish to.

The request for extradition

In Italy after the arrest and the consequent withdrawal of the passport, the foreign state is notified of the detention of the individual.
At that point the procedure is set in motion that will bring about either the liberation or the delivery of the defendent.
An extradition request will have to arrive from the foreign state, within fourty days from the day of arrest.

In this case if the requesting case is not able to assure the Italian state that this sentence would not apply, Italy would not be able to carry out the extradition.

Forty days to ask for a verdict on the detainee

The custom in Italy is to count the 40 days beginning from the date of the arrest, and from the date that the request is communicated by the requesting state.
It started from the sentence 9092 of 2013, issued by the Court of Cassation, 6 of the penal section, that has applied the articles 12 and 16 from the European Convention on extradition.
As it is a provisional arrest it can be ended after 18 days if the foreign state does not send the request and all of the necessary documents, and however it must not exceed a total of forty days.

From the moment in which the cautionary measure is revoked, it ends the right to withhold a passport, because the travel ban would then no longer apply.
Whilst the practice of extradition remains pending, the person is free until measures are taken to restrict this freedom.

In 2001 the 6th section of the Court of Cassation in 2001 with sentence 34796 on the 5th July annulled the order of the Court of Appeal that despite the pending extradition, denied the return of a passport.
The court had reaffirmed that given the delivery of the individual was suspended and the precautionary measures were revoked, the passport has, without a shadow of doubt, to be returned to the individual.

Refusing extradition does not indicate guilt

A person who has been requested for extraditon can oppose the extradition, without this seeming like an attempt to flee from from justice in eyes of the law. This is established by the setence 37469/2001 of the 6th section of the criminal Cassation.

The procedural conduct reaffirms the Court of Cassation does not have to be considered the only means to achieve justice.
To refuse extradition does not mean an individual wants to flee, there will have to be more evidence to reach this conclusion.

A new arrest for the gravest cases

In particularly grave cases, the European convention on extradition provides the possiblity of cirumventing the limit of 40 day detention from the day of arrest. The Court of Cassation with the sentence 1395 in 1993 highlighted how the state can detain an individual, it has the power to use all measures necessary to avoid the flight of the suspect or the requested individual.

Boccaudtri International Law Firm specialises in cross-border Criminal Law.
Thanks to our numerous expert layers we can guarantee guidance through every stage of the extradition process, assisting the individual in their mother tongue.

To contact our lawyers request an appointment for legal advice.