Probate and Succession in Italy 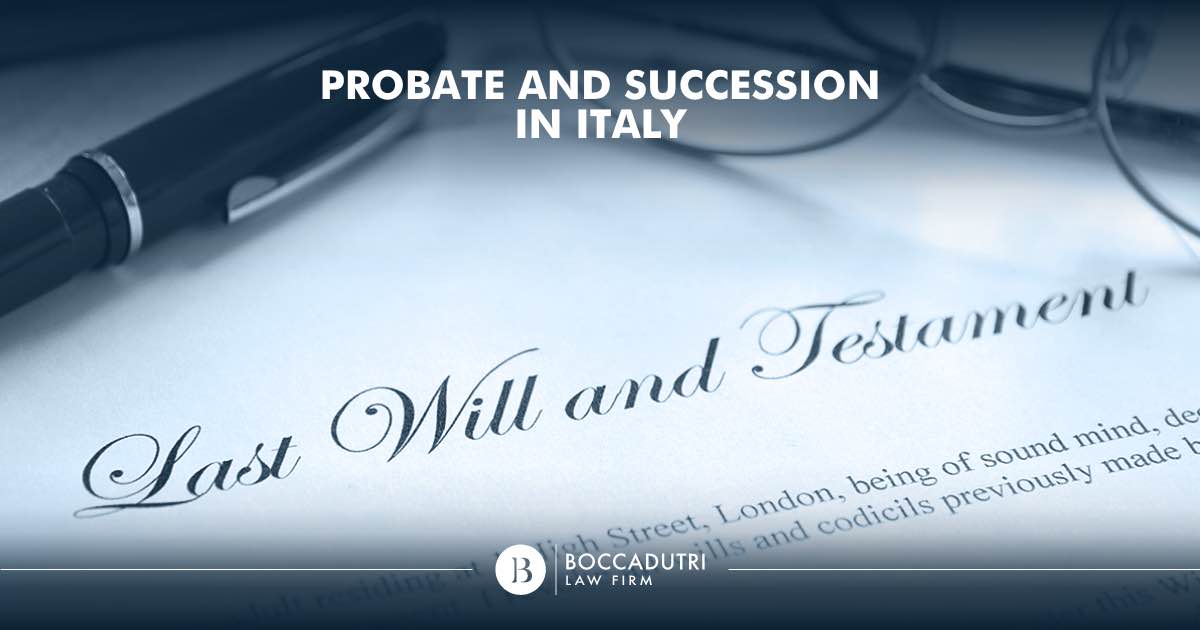 Ask a question about Probate

Probate and Succession in Italy represents the event through which the transfer of legal relationships, active and passive, from deceased to the heirs takes place.

When a person who owns assets in Italy dies, those assets must be distributed through succession, whether a will is present or not.

If a will exists, the laws regulating succession determine its validity. It can be revoked and/or modified with a new will or a declaration made before a notary.

In order to draft a will, it is necessary to be at least 18 years old and in control of their intentions and wishes.

In the event there is no will, the law determines the legitimate heirs. This category includes the spouse, the descendants, the ascendants (i.e. parents, grandparents), brothers and sisters, and other relatives up to the sixth degree. In some cases, the heirs acquire the right to the inheritance “for representation”, replacing a parent, a grandparent or an uncle or aunt.

In the case there are no legitimate heirs, the goods pass to the State.

The law foresees a series of specific norms regulating the shares in favor of this particular category of heirs.

The Italian law on probate and succession

In Italy, succession is disciplined by article 456 of the Civil Code.

The transfer of assets of the deceased begins at the moment of the person’s passing.

In order to be an heir, it is sufficient to be alive at the moment of the deceased’s death. Being conceived could also be enough. However, the Italian law provides exceptions on this matter.

The law presumes that if no more than 300 days have passed between the death and the birth of a child, the new born is deemed to have been conceived before the death, unless proven otherwise.

There is an exceptional case in which the capacity to inherit is conceded to a person who has not even been conceived by the time of the deceased’s passing. This circumstance is regulated by article 462, paragraph 3 of the Civil Code: a person may indicate a particular legacy in favor of the future child of another person. The indicated heir may receive only if the respective parent is still alive when the succession procedure starts.

Even if article 462 of the Civil Code does not refer to legal entities (i.e., societies, foundations, associations…), it is allowed for them to inherit goods of the deceased by means of a will.

Types of probate and succession in Italy

When the deceased has provided for the assignment of their patrimony to the respective heirs and/or legatees through a testamentary document;

When the deceased does not express a specific will concerning the assignment of their patrimony through a will, or in the event the will is declared void. In these circumstances, the Italian law provides for the individuation of the legitimate heirs within the relatives of the deceased. It intervenes also in the case that a will exists, but does not assign the entirety of the deceased’s assets (residual function). In this particular case, the succession will be both legitimate and testamentary.

The European law on succession

In Europe, with regards to civil law, the subject matter of succession is currently disciplined by the EU regulation n. 650 of 2012, which has been applied to successions since August 17th, 2015. In an international society, in which successions with extraneous elements are common, the European Union has tried to overcome discrepancies between different sets of rules from national to nation. The discipline is uniform and is applicable both to European citizens and to non-Europeans citizens, in the case they habitually reside in a Member State.

In the event the deceased does not indicate an applicable set of rules, the applicable law will be established in accordance with certain criteria. The regulation provides some useful parameters for determining the applicable law. Duration and quality of life of the deceased in a particular country are taken into consideration. For instance:

If the deceased had maintained a stable and close link with their country of origin – where they maintained family ties – despite continuous residence in a different country for professional reasons, the succession will be regulated by the law of the country of origin.

If the deceased has lived in several countries, but has kept their main assets in one particular country, the applicable law will be the law of this country.

Moreover, the EU regulation n. 650 of 2012 has introduced the European Certificate of Succession (ECS), a document published by the authority responsible for the succession procedure.

Fiscally, succession is regulated by the different countries’ national norms. In some cases, relevance is given to bilateral conventions subscribed by them.

Why should I hire a lawyer specialized in Italian succession?

Due to the complexity of such cases, especially for clients who are outside of Italy, the assistance of a lawyer who specializes in succession is fundamental in order to correctly go through the procedures provided by Italian law, particularly in the hypothesis in which the heirs or creditors intend to contest the will. Furthermore, several pecuniary sanctions are to be applied in case of non-compliance with the aforementioned procedures in a timely manner.

The estate manager – who tends to be a relative or a trustworthy friend – will also need the assistance of a lawyer experienced in succession. In fact, the latter has the power to guaranty full conformity with what is indicated in the will and with the law.

What does a lawyer specialized in probate and succession in Italy do?

Our lawyers will clarify the due procedures and will ensure that they are completed within the time limits provided by law.

Our experience gives us the chance to deal with several disputes among relatives for the distribution of property.

We are able to ensure that your interests will be safeguarded, as well as the will of the deceased.

Our lawyers are able to take care of all paperwork and bureaucratic matters, such as:

The individuals who are obliged to present the declaration of succession in Italy are:

In the event where more than one individual is obliged to present the sufficient.

Individuals who are exonerated from the succession

The declaration is not mandatory if the inheritance is devolved to the surviving spouse and to the straight-line relatives of the deceased, and the asset value does not exceed €100,000.00, and does not consist of real estate or rights in rem in immovable property. Such conditions may no longer be satisfied as a result of contingencies related to the inheritance.

In case of dispute between heirs or creditors, asset management may be delayed, with subsequent pecuniary sanctions. A lawyer specialized in succession can help avoid such sanctions and instruct the manager of the property on how to proceed.

Individuals who are excluded from succession

The right to benefit from succession or the capacity to inherit may be lost by individuals who are deemed undeserving. This condition is reserved for individuals who have perpetrated “particularly grave actions against the deceased or against their relatives” (art. 463 of the Italian Civil Code).

Undeserving to inherit may be:

Do not mistakenly believe that only the rich or elderly must draft a will. In fact, every adult benefits from creating a will, as it sets up a distribution plan of assets.

We do understand that dealing with the loss of a loved one is very painful. We strive to provide our clients with the best legal assistance in order for succession procedures to move forward with no obstacles.

Issues related to the probate and succession in Italy may be deeply complex, even for smaller estates. However, we regularly assist clients from all over the world that must deal with the legacy and properties of relatives in Italy.

Please, click here to get in contact with the Probate Department of Boccadutri International Law Firm and obtain more information and advice on Wills and Successions.