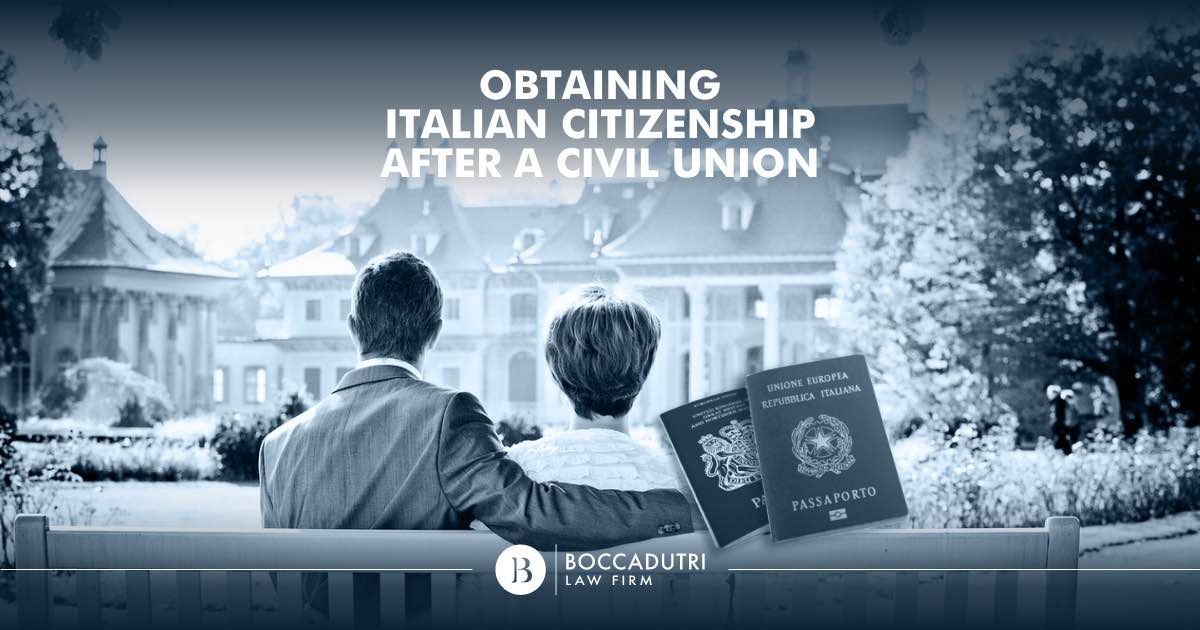 Italian citizenship following a civil union is one of the rights guaranteed by the Italian State, equating it with marriage and rendering the procedures for obtaining citizenship identical.

Currently in Italy it is impossible to officiate same-sex marriages, but Italian law recognizes them if they took place abroad, equating them to a civil union, which is legal. In fact, those who married in a foreign country that allows same-sex marriage at least three years before the law on civil union came into force, have already acquired the necessary requirements to apply for citizenship.

The Cirinnà Law on Civil Unions

This law introduced in the Italian legal system the institution of civil unions between persons of the same sex and de facto cohabitations.

The term “civil union” means the willing registration, at an Italian Municipality or at the Italian Consulate (in the case of citizens residing abroad), of two individuals of age, of the same sex, and civilly free to join their lives to form a family; it is a legal union that leads to the variation in one’s civil status.

It involves a series of rights and duties, very similar to those arising from marriage. A substantial difference however is the greater ease of dissolving a civil union, which can take place immediately without an intermediate period of separation.

“De facto cohabitations” are possible between persons of the same or of different sex. Unlike a civil union, they do not entail any change in civil status. The de facto cohabitation must be declared to the municipality, by form, or to the consular office, competent in dealing with residency, if the Italian citizen resides abroad. It can be terminated with a simple declaration that can be presented by just one of the two or ex officio in cases when two cohabitants change their civil status or cease to live together.

Another aspect of the “Cirinnà law” regarding civil unions allows the foreign partner of a non-Italian citizen who is resident in Italy to also acquire the right to apply for a residence permit for family reasons. The civil union between the two, in this case, must have been registered in Italy, or occurred abroad and recognized in Italy.

Timings and Ways to Apply for Citizenship After a Civil Union

The practice of applying for citizenship following a civil union does not differ from that relating to marriage. The requirements are also the same.

You can apply for Italian citizenship two years after a civil union with an Italian partner if both reside in Italy. The years increase to three if the couple lives abroad or if they got married in a foreign country where it was possible to do so. In the latter case, however, the marriage must be registered in Italy as determined by the law. There is also no change in the requirement of knowledge of the Italian language: level B1 of the Common European Framework of Reference for Languages (CEFRL) or higher.

Reunification. The Right of Permanent Residence

The European Court of Justice, with the “Coman and Others” (Case C673/16 of June 5, 2018), established that the rights of spouses to reunification apply even in those EU countries that do not recognize same-sex marriages (in this case Romania).

The right to reunification also extends to the recognition of the right to live and work, and therefore the right to stay and move, in the same country as the spouse, regardless of the fact that the country in question does not provide for nor recognizes this type of marriage.

Each individual EU country has the right to legislate same-sex unions and therefore decide whether to authorize them or not in their territory. However, when two citizens of the same sex have gotten married or joined civilly in a country where it was possible to do so, the discretion of the EU Member State ceases – it cannot refuse the right of permanent residence to a foreign citizen who wants to join their spouse (Directive 2004/38/EC on freedom of movement).

If you would like clarification on this matter, the lawyers from our Immigration Department at Boccadutri International Law Firm are at your disposal. Contact them here.