Liquidation Parental Damage, the reference tables in use 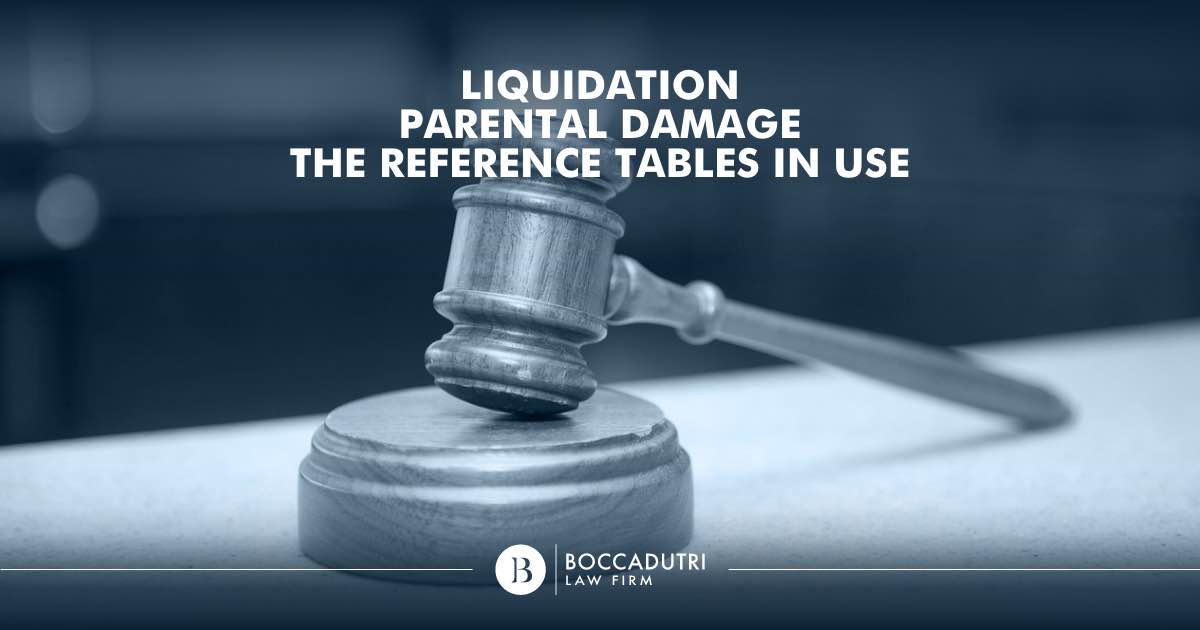 For judges, there are two reference tables for the evaluation of non-asset damage: the so-called Milanese and Roman tables. Which one should be chosen is still a subject of debate.

The liquidation of parental damages, or rather damages for loss or impairment of a parental relationship, is warranted by those who have suffered from the loss of a relative or because of the deterioration of the relationship with a relative due to serious physical impairment as a result of an illicit of third party.

In order to calculate the amount due, jurisprudence relies on reference tables, with the aim to standardize the amount of compensation.

The Reference Table of Milan or of Rome

There are two widely accredited tables of non-asset damage, that of Milan and that of Rome.

The Milan reference table assesses the damage through the identification of certain value scales, according to the category of the relative. Starting from a maximum and minimum figure, the judge can identify the amount of compensation for damages based on who is in front of him. A spouse who lost a partner in 2021 could have been compensated with an amount between €168,250 and €336,500. Not only is there a huge difference between the minimum and maximum, but the final attribution is also up to the judge’s assessment, who, among other things, has the power to increase the amount in cases of exceptional gravity or zero it if he realizes that the link between the victim and survivor was even rancorous. Parental damages cannot be awarded to a person who, based on evidence and testimony, has not experienced any suffering.

The Roman reference table suggests that compensation is to be paid according to the so-called “variable point.” The monetary value in this case:

The monetary value (rectius) is not constant but varies according to the degree of permanent disability; the higher this is, the more it increases the economic value of the point according to age. What is not taken into account is a subjective moral aspect.

It is always at the discretion of each individual court to rely on different parameters for individualizing damages.

The Supreme Court in Favor of the Milan Reference Table

In the wake of sentence no. 12408 of 07-06-2011, issued by the Supreme Court, it was customary to favor the use of the reference tables of the Court of Milan as these were considered to be the most suitable in order to ensure fairness in compensation for road accidents.

In short, all judges must adopt the same parameters for the settlement of non-asset damage. Such parameters should be identified using the tables drawn up by the Court of Milan.

The Turning Point in Jurisprudence

After ten years of supremacy of the Milanese table, as of 2021, the Court of Milan has had to revise its table of non-asset damage to bring it in line with recent jurisprudence, which separates “biological damage” from the so-called “increase suffering” or “moral damage.”

For those years prior to 2021, the table that reports exclusively the overall compensable damage remains valid.

Today things are changing and at the center of this change is the Supreme Court.

The Supreme Court recommends the use of a table based on a point system, as in fact the Roman table is structured, providing for the possibility of applying corrections to the final amount due to the particularity of a situation.

According to the Supreme Court, four requirements must be considered:

Although, the Milanese table guaranteed the application of a principle valid for all courts, it was realized that the Roman table left less room for discretion. In essence, the Milanese table has proved unsuitable for the assessment of damages for loss of a parental relationship.

Like any ruling that opens up new scenarios, 10579/2021 is bound to cause discussion and reflection. It comes down to the question of giving a monetary value to suffering and with this in mind the Roman table has the virtue of aiding calculations but has the defect of giving the same value to situations that change family by family.

If you have any doubts about this, the attorneys in our Personal Injury Department will be able to answer any questions you may have on the subject and assist you as needed. In particular, we deal with car accident compensation and can guide you on what to do if you are in a car accident in Italy.