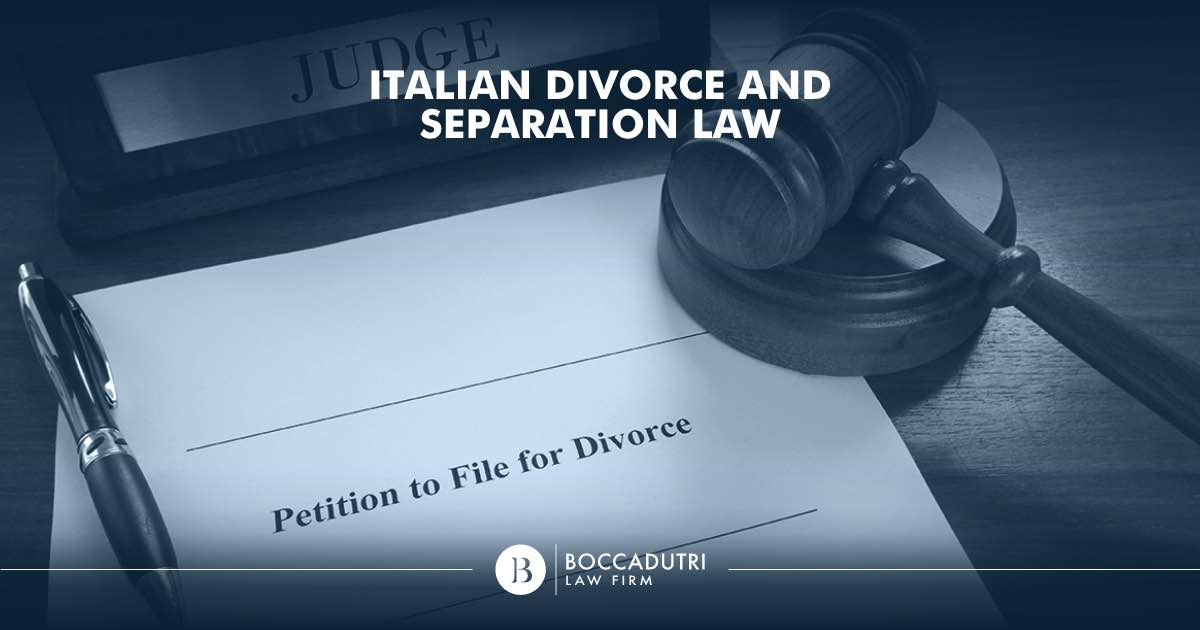 Italian Divorce becomes easier and faster with the new law

Divorce has been possible in Italy only since 1970. According to statistical data published by the Italian Central Statistical Office, only in 2012, for every 1,000 marriages, there were 311 separations and 174 divorces and from among all marriages gotten in Italy, in almost every fifth marriage, at least one spouse is a foreigner.

The break-up of a relationship or family can be one of the most stressful experiences anyone may have to face. Obtaining good advice about the italian divorce is key to making the right decisions and we are here to alleviate the stress and confusion.

As leading family and divorce lawyers, we have an outstanding reputation built up over years of practice in this field.

We can advise you on all aspects of relationship breakdown, including the financial implications and arrangements for your children.

The rule is that the court announces a verdict about divorce, taking into consideration all legal requirements specified in the Civil Code.

In the first place, the judge tries to reconcile the spouses and judge if there is permanent and complete disintegration of the matrimonial life.

According to Italian law, the formal prior separation is obligatory and lasts at least 6 months, if both spouses decide to get divorce by mutual consent, or 12 months, if there is no agreement between spouses.
Before the recent amendment of Civil Code, separation last at least 3 years. So in fact, the dissolution of a marriage is a result of two separate proceedings taking place one after the other (first separation and than divorce).

In 2014 and 2015 there were significant changes in Italian law which regulate divorce procedure and apart from shorten the period of obligatory separation, under certain conditions, are allowed other forms of getting a divorce – as an alternative to court proceedings, i.e. the negotiations with the participation of an advocate (negoziazione assistita con avvocato) or agreement made before the registrar of Public Registry Office (accordo innanzi all’ufficiale dello stato civile).

As mentioned above, the spouses may also conclude an agreement on separation, divorce or even change the previously adjudicated conditions of separation and / or divorce before the mayor competent for the place of residence for at least one of the spouses or the place where marriage certificate was drew up.
Also during this procedure, spouses may be represented by an advocate.

In the proceedings before a court, the assistance of a lawyer is obligatory.

Since 2012 in Italy is valid Council Regulation (EU) No 1259/2010 of 20 December 2010 implementing enhanced cooperation in the area of the law applicable to divorce and legal separation. It is applicable only in the EU countries that acceded to it (for example: Italy, Germany, France and Romania).

According to art. 5 of that Regulation, if certain conditions are fulfilled, spouses may agree to designate the law applicable to divorce and legal separation, for example the law of the State of e
Divorce creates significant personal and financial challenges.
If you face the prospect of divorce or any other family‬ ‪‎law‬ matter that may impact your rights or your children’s future, the lawyer you choose is critical.

From our offices in Palermo, Rome and Milan, the lawyers at Boccadutri International Law Firm serve clients throughout Italy. To contact a Boccadutri family lawyer about the Italian divorce, click here.