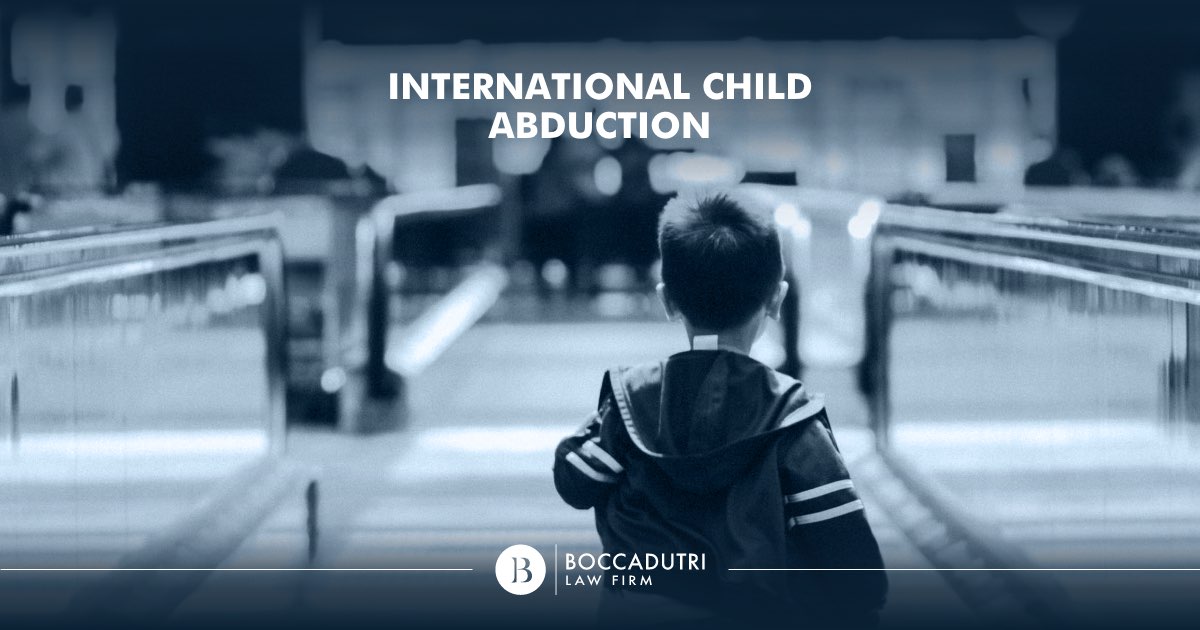 The international child abduction is an offence that occurs in cases where a child is taken from the custody of their parents (or from whoever has parental responsibility for the child), against the parent’s consent, and taken abroad.

According to Italian law, international abduction is a criminal offence, as it contravenes the protection of a legal asset (the responsibility of both parents).

Abduction and detention of a minor abroad in Italian Law

The offence of abduction and detention of a minor is set out in article 574 of the criminal code.

According to the criminal code, “anyone who abducts a minor from their responsible parent, taking them or holding them abroad against the parent’s will, and preventing them from either partially or fully from carrying out their parental responsibility” is liable for prosecution.

It takes the form of an offence when

If the minor is taken abroad, it is impossible for the other parent to exercise their own right to visit and other such parental rights.

This offence carries a sentence of a 1-4 year imprisonment and, if the parent who takes the child abroad without the other parent’s consent has parental responsibility, he or she may be subject to the access penalty, whereby their right to exercise their parental responsibilities is suspended or removed.

The sole possible mitigating circumstance would be where the minor is at least 14 years old and expresses their consent for the move. In such a case, the applicable prison sentence would be lowered to between 6 months and three years.

Abduction and Detention of a minor abroad according to international law

There are two international legislations that regulate international abduction of minors. Both were conceived as emergency procedures to ensure the immediate return of the child to their home country. Their objective is also to restore the child to their previous living condition as soon as possible, and to limit the damage to the child’s proper and balanced psychological development which would likely be damaged by the forced absence of one of their parents.

Among other things, the longer the child is removed from their home country, the greater the chances that the child will integrate in the State and the environment in which they have found themselves following the abduction. This could add another complication to an already traumatic situation, which if prolonged, could even make it inappropriate for the child to return to their home country.

The Hague Convention, dated the 25 October 1980, concentrates on the civil aspects of the subject. In Italy it was incorporated in Law 64 of the 15th January 1994. It is a multilateral agreement that is based on a principle according to which moving a child to a country other than their home country or the lack of re-entry into their home country is not in line with their best interests.

The procedures of the Hague Convention may be applied if both the State of habitual residence and the State to which the child has been taken have ratified the Convention and if the child who has been abducted has not yet reached the age of 16. If the country where the child has been illegally detained is not one of those of the Hague agreement of 1980, the request must be made directly to the forementioned foreign country, without appealing to the convention.

The convention established a streamlined and centralised communication system in order to achieve the safe return of abducted children. The central authority of the child’s home country or the central authority of the child’s current country of residence can be addressed in the same way. The first attempt to repatriate the child does not require a response. If the first attempt is not successful, the applicant, or an authority representing them, can file a lawsuit in the State of refuge to obtain a return order.

The legal procedure which leads to the issuing of a return order is carried out according to the usual processes of the requesting country.

The child will give testimony in the course of the proceeding (and European states in particular foresee this), unless it is considered inappropriate for the child for age/maturity related reasons. It may be possible to challenge this, depending on the laws of the state in which the case is taking place.

Whoever appeals to the convention for the child’s return must be one of those with legal responsibility for the child.

Regulation n. 2201/2003 of the EU Council specifies jurisdiction, recognition and enforcement of judgements in matters of parental responsibility. The decisions made in one particular member state are recognised in the other member states without any further necessary proceedings (Excluding necessary exceptions, i.e. if it goes against the best interests of the child or public order, if the child was not heard first when it could have been, or if a decision was taken without hearing the other party).

This regulation is responsible for the sanctioning of unlawful removal and detention of children.

The Procedure for the return of Children

The Hague convention and the 2201/2003 regulation foresee two different kinds of procedure for the return of children, according to their location.

Active Procedures (Requesting the return of a minor to Italy)

An application is made for the return of the abducted or unwillingly detained child. The maximum time allowed is from a year after the child’s departure or failure to return.

The legal authorities of the hosting state, with an urgent procedure, have 6 weeks to respond to an application. In order to have the request accepted, the requestor will have to demonstrate that the child previously lived habitually in Italy, and that the child finds themselves in a position where there is a violation of child custody regulations granted to them by law.

If the application is made after the time limit of one year, the legal authority of the country of the child’s current location may still order his or her immediate return or reject the application on the grounds that the child has now settled in their new environment.

The return order is an emergency measure that returns the child to their home country.

An application for such an order can be rejected if:

According to the regulation 2201/2003, the member states of the European Union, with the exception of Denmark, can invoke a review, a mechanism by which the Italian judicial authority for the child’s Italian residence which has jurisdiction over the question of custody can have the final word on the question of the child’s return. In this case, the decision of the Italian judge would take precedence over that of the decision of the foreign state.

A return order issued by a judge of the minor’s home country, in the case of a review, must be immediately enforced, and has no need for an exequatur.

Passive Procedures (Returning a child from Italy to another country)

If whoever is detaining the minor does not intent to return the child to their home country voluntarily, the central Italian authority sends the return request and relevant documentation to the public prosecutor’s office at the competent juvenile court, according to the minor’s location.

The public prosecutor applies to the juvenile court, which sets up a hearing to discuss the minor’s repatriation. The applicant may attend the hearing, with a translator if necessary.

An appeal against the decree can only be made through the Court of Cassation, however,  the appeal does not suspend the decree.

In the case that the application is successful, the public prosecutor’s office ensures the safe return of the child.

How to prevent the abduction of Minors

It’s not easy to do anything in the short-term following a minor’s abduction, especially if it is an international detention. Ideally, it is better to act before the abduction and to attempt to stop the child from being taken abroad.

In the case of a custody appeal, a ban on the child’s removal may be requested in an inaudita altera parte decree (application for interim measures).

With the decree of the 15th September 2020, the court of Como, to cite one example, ordered ‘as a matter of urgency and without hearing the other party, the prohibition of expatriation of the child omission, until the date of the hearing for which the parties will personally appear on the matter’.

It is important to have any agreements/ discussions relating to custody recognised by the relevant countries.

How to report the abduction of a Minor

The report of the abduction of a minor is made via the public prosecutor or via a police office. After the report has been lodged, the civil court in the relevant town of residence must be asked to take urgent measures, which may even include suspending or revoking the abductor parent’s parental responsibility. In the case of separation or divorce with the parent who took the child abroad, an application can be made to the civil court of the applicant’s city of residence.

The abduction of a minor taken abroad may also be reported to the ministry of foreign affairs.

If the country to which the child has been moved signed the Hague convention, the abduction can be reported to the central authority via the ministry of justice, department of juvenile justice, so that the convention can be activated.

If the detained child is found in any country in the European Community, the 2201/2003 European regulation is applicable. According to this it is possible for Italian sentences to be recognised and followed. The only exception would be in the case of the failure of the other country to act reciprocally, that is to say that the crime must also be recognised accordingly in the other European state.

The Public Prosecutor, having recognised the abduction, may apply to the Judge for Preliminary Investigations for a pre-trial detention order (which must be internationalised) against the offender.

Our Law firm is able to assist, both in Italy and overseas, anyone who finds themselves in the above situation. We can help you through the prevention phases, or, if an abduction has already taken place, the repatriation phase. For more information, please contact our Family Law department.