International Adoptions: between crises and special needs is something stirring? 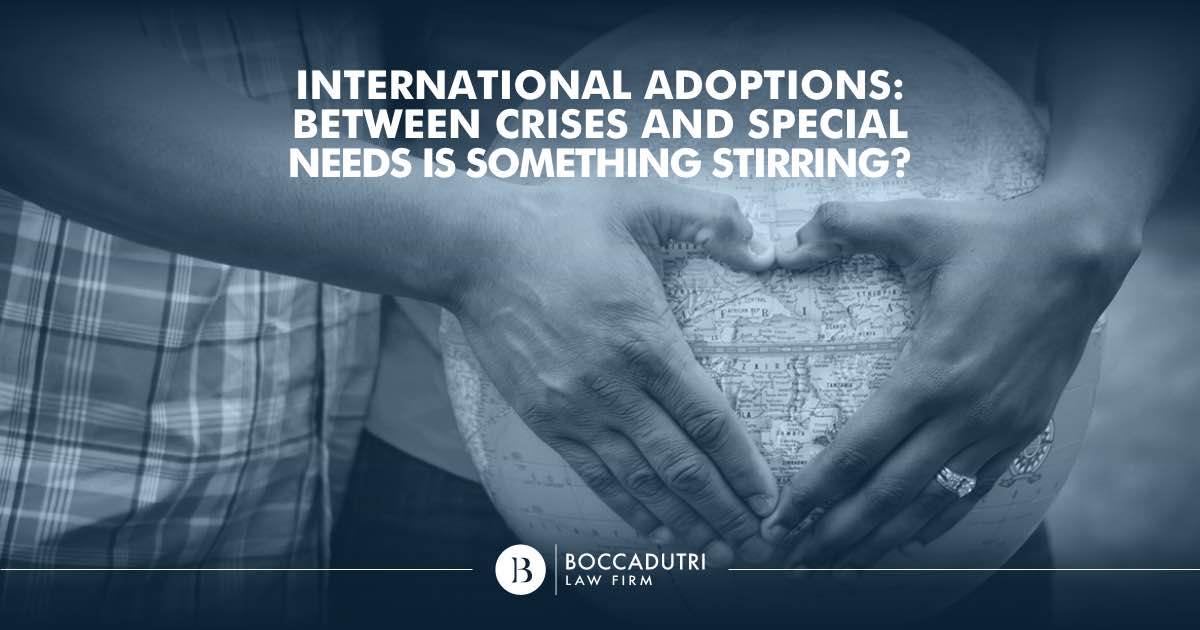 The road to adopting children abroad is becoming yet more torturous.

Many end up giving up, even after gaining their proof of suitability. Yet the CAI, the body responsible, is coming back to make itself heard.

Something is changing, that is to say the socio-political situation of countries where children come from, but there is something that never changes: the torturous, bureaucratic journey.

From the 4,130 children that made as many families happy in 2010, this figure dropped to 2,211 in 2015. This is a plunging drop also due to a high percentage (that is to say 30%) of suitable couples that give up almost straight after arriving.

The commission for international adoptions takes on workers again.

One date that brings some hope for a change of tendencies is that the “Commissione Adozioni internazionali” (CAI), that is to say the body responsible, after years of opposition to progress, has been put back into action by the new President and Minister for Relations with Parliament (with delegations on the subject of international adoptions and similar opportunities), Maria Elena Boschi.

Called to respond to adoptions and custody, in the Justice Commission in the Chamber of Deputies, she announced the figures for the current situation and the proposed investment of €20 million to get the system going again.

Part of this amount should be used to reimburse the costs sustained by parents in the past.

The account tells us that the last families to have received remuneration were those to whom a child was entrusted in 2011. And not all of them received it.

The role of the Commission is to maintain contact with the countries of origin of the children, to manage the bodies that accompany the families through adoption and act as a spokesperson for adopting families.

It is a shame that in September the Commission should have already met, according to the proclamations of Minister Boschi, but the month passed without news. Now that expectations had been tempered, it is not yet known if there are effective methods to reduce time and costs in the government study.

One solution could be to look for agreements in other nations but at close inspection, there would also have to be an income-based differentiation between the families that make the request, in order to quantify the remuneration.

Of course, binding future payments to the ISEE, as transpired, would seem more than just a solution, but an improvement.

One too many judgements for those wanting to adopt

In Italy, the only case in Europe, those who ask to adopt a child must submit to the verdict Tribunal for minors, whose job it is to establish suitability.

Before reaching a judgement, you risk having to participate in numerous meetings.

Furthermore, getting to adopt a child could mean waiting up to five years.

It is easy to understand why potential parents give up halfway through the process.

There are also many cases of people who, with the whole procedure over and having been judged suitable either by social services or by the Juvenile Court, decide not to go ahead with it within the year.

After a year, suitability becomes void and to win it back, couples have to go back to square one.

The decision to give up is also taken because of the extent of the costs of international adoption, which increase exponentially if the adoption does not go well straight away.

Just 50% of sustained costs are deductible from the overall income, if it is perfectly documented and certified.

It is also possible that whether people give up depends on the situation of the children being adopted.

If in the past countries that children came from favoured international adoption as a solution for not leaving them in institutions, currently the same countries favour national adoptions, and are creating the right conditions for them.

By adopting better welfare policies, or otherwise undergoing periods of political instability, these countries are substantially reducing the number of children that can be adopted.

The Convention of Aja, ratified in Italy with law no. 476 from ’98, means that international adoptions are resorted to much less often, given that it is advantageous for every country to provide for the wellbeing of their children by themselves.

Those who are available to Italian parents are often too old, and therefore find it difficult to adapt to a foreign country, or they are children with special needs or requirements, who might have serious illnesses, HIV, heart complaints, difficult upbringings or psychological problems.

Special needs can also be talked about in the case of siblings who are not to be separated.

Leaving the matter to a professional can help

It is best to get advice from professionals both before starting and during the procedure, for qualified assistance and guidance through a process that could weaken even the most motivated people.

The lawyers at Boccadutri International Law Firm will be able to clarify any doubts you may have on the subject thanks to their experience in dealing with parties and contacts in the countries that the children come from.

If you are available to welcome a child into your home, wherever they might come from, and if you have any number of questions or concerns, do not hesitate to contact the lawyer here.