Inside Option: Problems with the withdrawal of funds 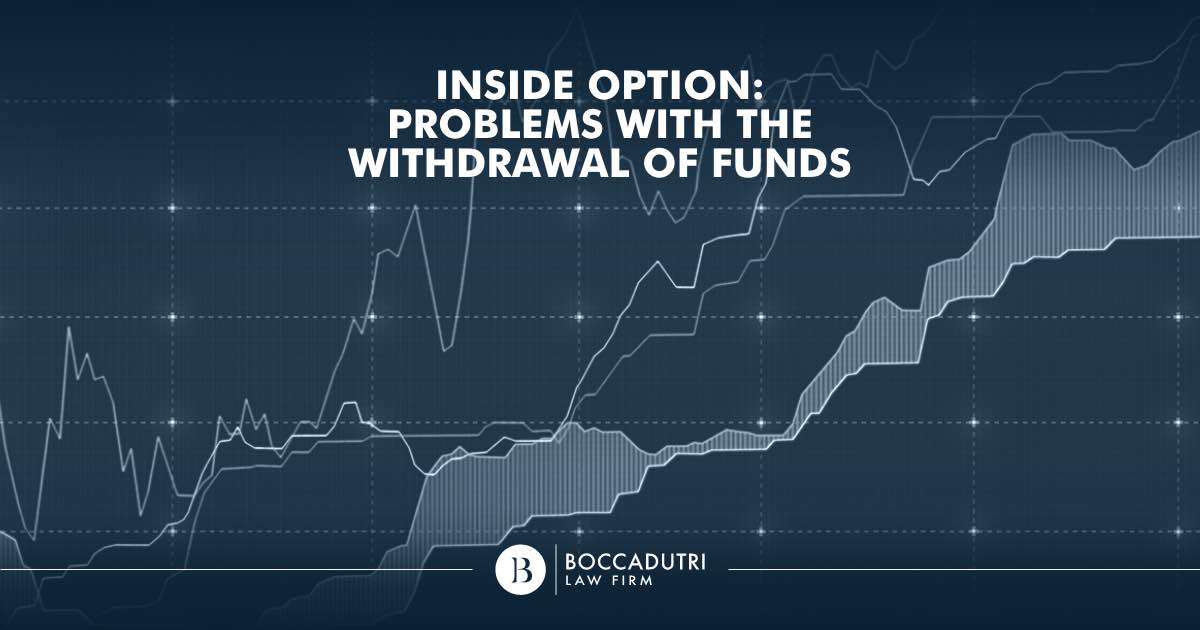 A parabola of the business of Forex, Inside Option imposed itself on the market with hard selling methods and, after two years of accusations from angry clients of problems with withdrawing credit, stopped replying. All this before one of their representatives was arrested.

When looking for information about a broker, you end up finding negative reviews because it is impossible, when trading in binary options, for unobservant traders not to make a loss.

Partly out of disappointment, partly because it is easier to blame others rather than yourself, it is taken up publicly with the broker.

However, in this case, if you are dealing with a serious company, positive ones overrun negative reviews. When looking for information about Inside Option you can find comments and warnings that are unanimously about the dangers of the company.

Inside Option started operating in 2014 in the binary options market. As a company it has been found to be either not regulated, or with unverifiable credentials.

Its registration centre proved to be in Saint Vincent and the Grenadines and there also proved to be one in Bulgaria and in London.

On Facebook, there is an emphasis given to the London headquarters, which are indicated as the only point of reference. It can be assumed that this led faithful investors to bet on Inside Option as a broker.

As signalled by different users, the website underwent maintenance from September 2016, while posts on Facebook had already been interrupted from January of that same year.

Telephone numbers have an English code but the call centre that replies is in another country. In many cases people said that the operators were calling from Israel.

When they began to refuse withdrawal requests to clients, they claimed that the rules on bonuses were the reason. Because of this, the client would lose money, despite apparently winning through the trades.

It is a crime that the clients were not informed of these clauses before investing their money. Faced with protests they reacted by ceasing communication, by changing passwords to hinder future access, and then by not responding to emails or phone calls.

Part of this hard selling, beyond the promises of easy earnings, is the convincing of a portion of users that is diverse but largely composed of pensioners and very young people. These tactics begin with simple emails, and are followed by continuous and annoying calls.

Initially, the prospective investment, consisting in small figures, was evaluated as being convenient once you have already earned trust (and some initial money), the sellers go on the attack by convincing those who have already been exposed to risk much larger figures.

Taking the second step and persuading the clients to be taken beyond their means with large amounts was a group of unscrupulous and expert sellers that did not have any difficulty convincing those who had already made the first investment.

Those that have earned winnings have had serious difficulty withdrawing them.

The headquarters that were apparently situated in Great Britain induced many to overestimate the broker. There have been many dissatisfied clients in the United Kingdom, and the losses reported to the authorities are considerable.

The British government is keeping quiet

Investors have accused the British government of immobility and of having left them alone.

Supposing that the silence of Inside Option was unjust, they denounced the suspect activity of the company to Action Fraud, the centre of fraud advisory of Great Britain, which manages requests for scams that happened in the United Kingdom or those associated with it, as well as those done online.

It is a shame that Action Fraud cannot take down the company abroad.

Even the FCA (Financial Conduct Authority) was brought up to date with what was happening, but in this case with no help: the FCA does not have any authority on the subject and sent the warning to the Gambling Commission, given that binary options are classified as a gamble, and not an investment.

The same story: the Gambling Commission only looks after registered companies in the United Kingdom. The British Police admitted with discomfort that its hands were tied.

Fundamentally there is still a regulatory vacuum in Great Britain that does not allow victims of suspect companies to set out their rights.

An inquiry at the centre of the scandal

The scandal in England was revealed in September 2016, by an investigation brought together by the Daily Mail and the Bureau of Investigative Journalism: too late for many that have been scammed by Inside Option.

The National Fraud Intelligence Bureau has said of the crime that the sale of Binary Options by some offshore officers is today the largest scam in the United Kingdom.

The website stopped working as soon as the article was published.

A turning point: the arrest of Eliran Saada

Eliran Saada, title-holder of Express Target Marketing, which in turn owned Inside Option, was recently arrested in Israel for a series of crimes including fraud, false registration, extortive threats and blackmail.

The detention of this man offers hope for those who have not yet got responses or money.

If you have been a victim of Inside Option, or of scams linked to Forex, do not hesitate to contact our lawyers.

Thanks to their experience they will evaluate the best solution to help you get your money back.

Fill out the application form here.