Injuries at work: What to do 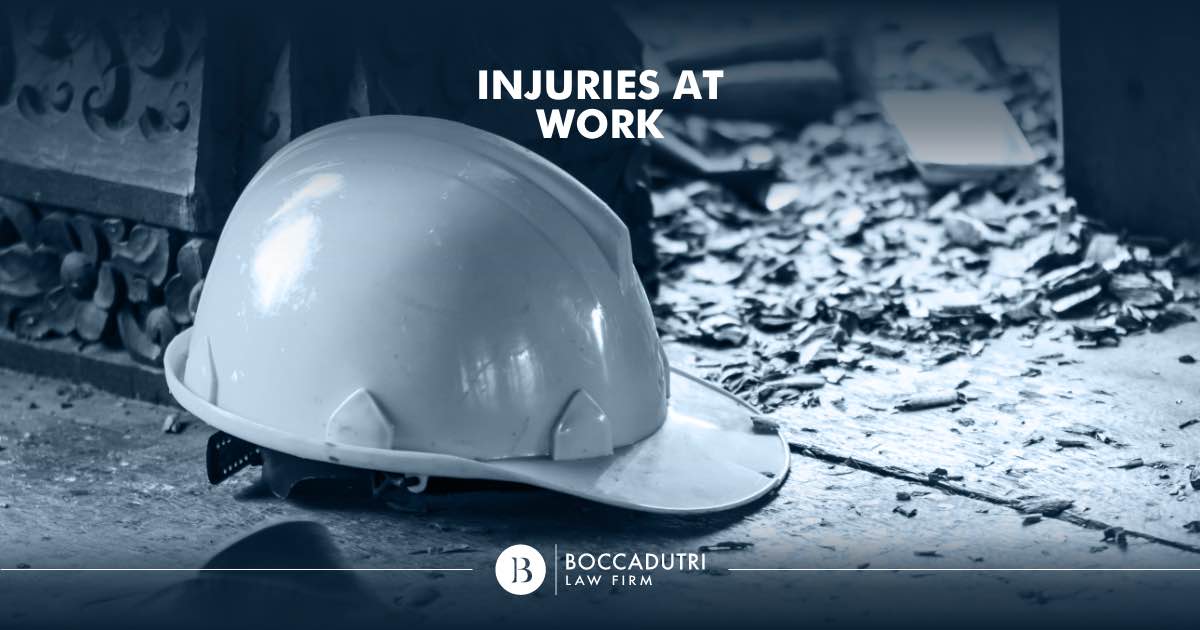 Accidents at work are the constant chronicle of the failure of modern society, which has all the tools to protect the worker, but does not use them.

An accident at work is a fatal event occurring while one is carrying out a work activity or on the way to or from work, the so-called commuting accident.

Its consequences are temporary or permanent inability of the employee to perform the job or death.

As the media has unfortunately accustomed us to seeing, the figures for fatal occupational injuries always have worrying numbers, inconceivable in times of adjustments to safety standards.

To protect the worker and his family, to ensure that he receives adequate pay during the days of absence, or that surviving family members can benefit from concrete help, the Italian state has provided for compulsory insurance cover.

The concept of ‘safety at work‘ was incorporated into law in 1965 under Presidential Decree (Il decreto del presidente della Repubblica) No. 1124 of 30th June, titled:

Five years later, Law No. 300 of 20th May 1970, better known as the ‘Workers’ Statute‘, i.e., “Regulations on the protection of the freedom and dignity of workers, trade union freedom and trade union activity in the workplace and rules on employment”, came into being.

Since 2008, the Consolidated Occupational Safety Act (Legislative Decree No. 81 of 9th April 2008) has been in force.

In the event of an accident or occupational illness, therefore, during the period of inability to work, ‘INAIL’, the National Industrial Accident Insurance Institute, guarantees the payment of an indemnity.

In the extraordinary situation that has come about since 2020 due to COVID-19, we have found ourselves with many workers unable to work due to the infection.

Article 42 of Decree-Law No 18 of 17th March 2020, created in the midst of the emergency, defined the Coronavirus infection contracted at work as an ‘accident at work’.

According to the Court of Cassation, which was called upon to express an opinion on the matter, ‘the action of microbial or viral factors that, penetrating the human organism, lead to an alteration of its anatomo-physiological balance’ constitutes a ‘violent cause’ (a situation comparable to that of healthcare workers who contract HCV hepatitis after being stung with infected instruments).

As a result, if you can prove that you contracted COVID-19 while at work, you will be eligible for the same protection from INAIL that is available for work-related accidents.

Naturally, those working in a hospital environment are more likely to face the direct consequence of work and COVID infection.

It could be the worker’s own conduct, or a combination of it and the employer’s shortcomings, that caused the employee’s injury.

The law makes a distinction between conduct that is in any case attributable to work purposes, namely absentmindedness or recklessness, and the exceptionally serious conduct that can only cause an accident if it is carried out.

The employee, even if guilty of malpractice, negligence, or recklessness, may be entitled to receive statutory benefits.

They lose them if their conduct had purposes inconsistent with the activity performed, such that they were made inevitable.

To better understand the difference in judgement, the Court of Cassation, with its rulings, comes to aid.

An example of imprudent conduct, which nevertheless gives rise to a right to compensation, is the one highlighted by ruling No. 8164 of the Criminal Court of Cassation, Section 4, of 2nd March 2020.

The verdict highlighted the employer’s liability in the case of the accident of a worker in a panel polishing/squaring plant.

The man had suffered a ‘fracture (of) the distal and middle phalanx third finger of the right hand with multiple contused lacerated wounds’, with a prognosis of 51 days.

According to the verdict, ‘even if the procedure involved stopping the machinery, any careless conduct on the part of the worker was foreseeable’.

In fact “the overall conduct of L.F. was not atypical with respect to the occupational risk that the guarantor (the appellant) was called upon to govern … in the conduct of L.F. the requisites of the exceptionality and non-foreseeability cannot, in fact, be found since it was a manoeuvre carried out in the context of the work to which he was assigned and aimed (albeit imprudently) at circumventing obstacles to the continuation of the work cycle’.

The investigation had established that the injured worker had not been adequately trained to manoeuvre the machinery properly, and that “the leakage of the belts was a frequent occurrence known to the employer.

Therefore, even if the modes of intervention, in the event of an accident, provided for the prior shut-down of the machinery, any negligent or careless conduct of the employee in the performance of his duties was an event normally foreseeable by the employer”.

An exemplary case illustrating the opposite situation, was that of the worker who died following an accident with a rewinding machine.

The Court of Civil Cassation, Sec. Lav., in its ruling of 28th October 2021, No. 30599 rejected the family’s claim for damages due to the worker’s ‘abnormal’ behaviour.

The compensation payable to the worker is borne by the employer and INAIL and is divided as follows:

The company also contributes, according to what is stipulated in the collective agreement signed by the worker.

A worker, who is the victim of an accident at work, is normally entitled to a total of 180 days of leave in a calendar year, under pain of losing his or her job.

After the 180-day ‘sick leave‘ has elapsed, the employer may proceed with dismissal.

In that case, he must pay an indemnity in lieu of notice.

The right to job retention may vary according to the CCNL (Collective Labour Agreement).

Normally, the accident period would not apply for the purpose of calculating the leave period.

Sometimes, however, some CCNLs do not make a distinction, so one must refer to the specific case.

Procedure for reporting an accident at work

The accident must be reported immediately by the employee of the company: if the employer is not aware of the facts, they cannot inform INAIL, and the employee would lose INAIL benefits for the unreported days.

The medical examination is then essential to assess the extent of the accident and to produce the medical certificate required for the accident report. The same hospital that provides initial treatment is required to send the certificate electronically to INAIL.

The accident report to INAIL must be submitted in a different manner if the prognosis exceeds three days, in addition to that of the accident.

The company has two days from the moment it becomes aware of the facts, unless the worker’s life is in danger, or has already died, in which case the time is halved.

For accidents exceeding the three-day period, INAIL must also be notified of the worker’s salary parameters.

If the accident causes the death of the worker, or if the prognosis exceeds thirty days, the public safety authorities must be informed within 24 hours.

Reimbursable medical expenses in the event of an accident at work

In the event of an accident at work, medical expenses are borne by INAIL, which will reimburse them, or cover them, subject to authorisation by the institute itself.

In this case, it is up to the worker, and not the company, to submit a suitable request.

Unlike sickness records forwarded to INPS which are subject to a tax assessment at one’s home, INAIL does not need to ascertain the condition during the accident.

This is because they make their own diagnosis immediately and establish the days of prognosis.

Although the scenario is the same, and probably so are the responsibilities, work-related illness has a different time frame from work-related accidents.

It is in fact a gradual occurrence, an ailment contracted while working and due to work, while the injury is sudden and clearly identifiable within a certain time frame.

For one to be able to speak of work-related illness, or an occupational disease, it must be established that the illness was caused by the type of work the worker does, or by the environment in which they work.

Proving a link in causality between the type of work performed and the occupational disease is not always possible.

If the illness is listed, the worker does not have to prove that his illness has an occupational origin.

If the illness is not listed, the onus is on the worker to prove its occupational origin.

The doubt arises in the case, for example, of a worker who has developed lung cancer, has been exposed to toxic substances, but happens to be a smoker.

In such cases, it should be ascertained which of the two possible causes is prevalent.

It may be difficult to distinguish between occupational disease and common illness, the prior which would be managed by INAIL, and the latter, by INPS.

If one is suffering from an illness that is presumed to be work-related, it is the employee’s responsibility to submit a medical certificate to the employer within 15 days of the onset of symptoms.

The employer must send a report to INAIL within 5 days of being notified of the illness.

There should be “no difference between the occurrence of occupational illnesses and the occurrence of accidents”, as reiterated by ruling No. 40 of 05th January 2016 of the Criminal Court of Cassation, Section 4. It follows that as stated in Article 589 of the Criminal Code, second paragraph, which states that the aggravating circumstance is configurable for any violation of Article 2087 of the Civil Code.

Effectively, “the protection ensured to persons equated to victims of duty by Law no. 266 of 2005, art. 1, para. 364, also includes workers suffering from occupational diseases”, as underlined by the Civil Cassation, Sec. Lav., in ruling no. 823 of 19th January 2021.

Persons covered by insurance against accidents at work and occupational diseases

Not only are employees eligible for insurance cover but so are:

The types of work accidents that are covered by insurance are:

The help of a lawyer in cases of work-related accidents

Compensation for biological damages by INAIL, and therefore the insurance taken out for the advantage of the worker, does not cover any injuries that they may suffer.

Moral damages (intangible injury such as emotional distress, trauma or phycological damage) and other non-pecuniary damages are excluded in the first place.

The verdicts tend to recognise the admissibility of compensation for the so-called differential damage (i.e., that which covers the difference between the sum paid by INAIL and the sum which is actually due under the tort liability model).

The employee should be able to obtain full compensation for the damage suffered from the employer.

In the case of disability of more than 16%, INAIL pays a lump sum that compensates both biological damage and pecuniary damage due to incapacity for work and earning.

Often the sum received doesn’t correspond to the correct and fair compensation owed to the injuries suffered, for this reason, only the assistance of a lawyer can enable the ‘affronted’ worker to obtain what is entitled to them.

Boccadutri Law Firm’s lawyers in the Department of Damage Compensation are available to analyse the different situations that establish the proper compensation owed, according to the type of work-related injury suffered.