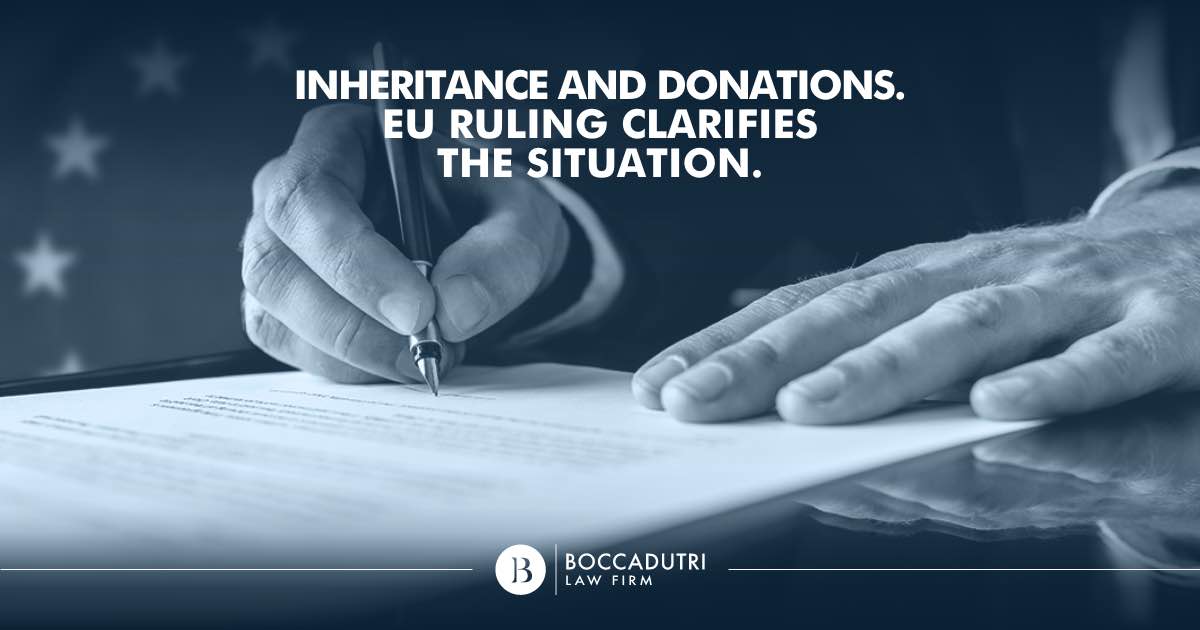 Ask a question about Probate

A European ruling, effective in all Member States, will regulate cross-border inheritances.

Cross-border inheritance was a controversial subject in Italy until the application of EU regulation number 650/2012 of the 4th July 2012.

However, although this came into being around four years ago, it was not applied until 17 August 2015.

In fact, as per the express requirements of article 83, it only applied to inheritance from then onwards.

The ruling has brought a change in the landscape, plugging gaps and above all creating the “Certificato Successorio Europeo” (The European Certificate of Succession), which can be used in a Member State where an heir needs to assert their status.

Finally, concrete guidelines have been made to clarify jurisdiction, given that, in the case of the succession of Italian goods for foreign citizens, the internal regulations of the Conflict of Laws are not the only important factor.

In a world without boundaries, the acquisition of property in Italy is a normal procedure that is common even for citizens that continue to live abroad. The same goes for Italian citizens who choose to move abroad whilst holding onto real estate in their native country. In both situations, it requires some thought and reflection in order to clarify which legal regime handles inheritance.

Every European State has substantial differences; therefore a regulation that is in effect for all of them also governs relations with states outside of Europe.

The law to be applied

The underlying principle is that the law to be applied should be the one from the country in which the deceased chose to live, that is to say the one to which they transferred their interests, business and affairs.

The widespread idea in the laws of the European states (and in Italy, to name one example) that citizenship remains valid, taking the place of preference during their life, is not in fact the case. It is understood that the person making the will can stipulate (professio juris) which law is applied to their inheritance (country of birth or residence).

The authority that handles inheritance is called to analyse the circumstances of the life of the deceased person in the years previous to, and at the time of, their death. This is done in order to confirm their regular residence or the state in which their real affairs were held.

For the notary, knowledge of the citizenship of the deceased person will no longer be fully indicative and could be subject to a much more complex analysis.

Valid outside of the EU as well

There’s more. According to the regulation, the court of the regular residence of the deceased at the time of death is qualified to make a decision about all the heir’s possessions, both real estate and personal property, even if they are situated in a non EU member-state or one in which the ruling does not apply (United Kingdom, Ireland or Denmark).

Italian citizens that decide to move abroad at any moment in their life might be convinced, wrongly, that their inheritance would remain the jurisdiction of the Italian State.

However, Italian citizens should know, not only that this is not the case any more, but also that they themselves might be able to make such a choice, even if they were to go to live in a country outside of the EU.

A resident in the United States who is also an owner of real estate in Italy, would see the application of the American law for personal property and of the Italian law for real estate.

Another case might be inheritance claims between a citizen of a country in which succession agreements are permitted and an Italian citizen (where they are normally prohibited). At this point you would only have to choose a law that recognises the agreement in order for it to come into effect.

The situation in the UK

The system in the United Kingdom already had some international allowances. The resolution of the law was already based on the country of residence rather than the country of birth.

To be able to distribute the possessions of a deceased person you must obtain an authorisation from the judge in charge. At this point the debts are paid and what is left is distributed.

It is also true that in England, the possessions to be inherited, even if they belong to people resident in other countries, but lacking in links with that country, must submit to English regulations.

In case of an inheritance conflict, the principal of separation follows, which provides specific rules based on the nature of the goods to be inherited (ruling of the place of residence for personal property, ruling of the country in which they are distributed for real estate).

The consequences of a situation like the one in England are that the decisions taken by the judge in question in accordance with the Regulation 650/2012, will not be effected.

If you have any doubts about inheritance, if you want to make a will, or are the heir to property in a country that is not your native one, do not hesitate to contact our lawyers by filling in the application form here.