How to live in Italy as a British Citizen after Brexit 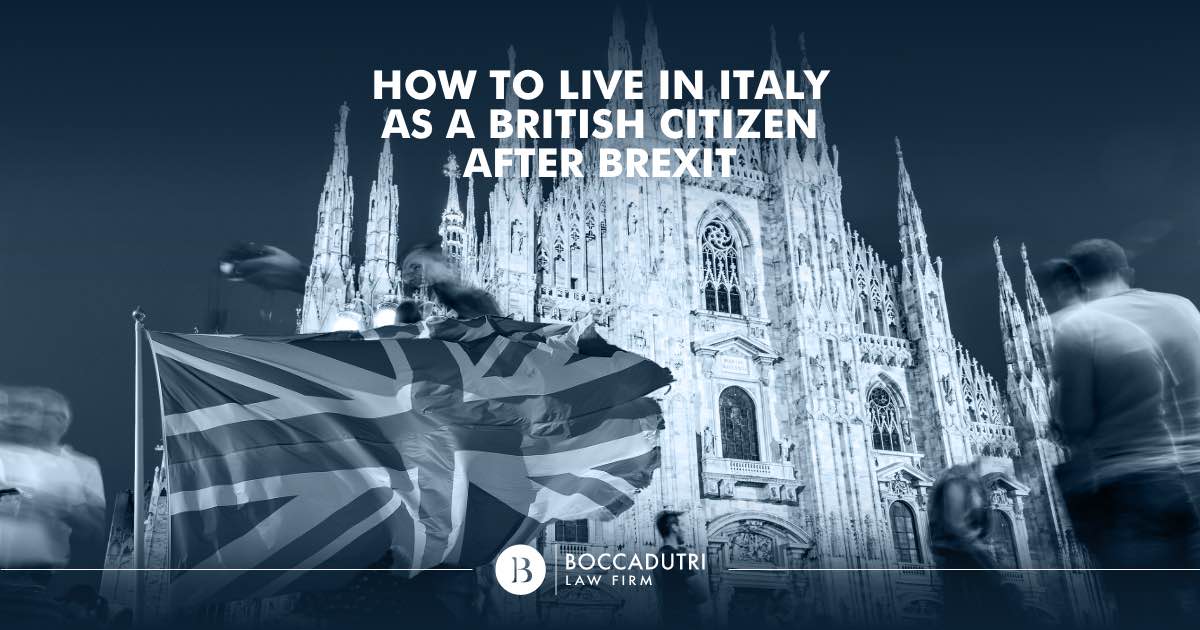 For British citizens residing in Italy, measures have been designed to guarantee them a peaceful stay post-Brexit.

Italy was the first country in the European Union to provide guarantees to British citizens in post-Brexit europe, even in the case of “no deal”.

To do this, the Italian government, on the 25th of March 2019, adopted the Brexit Decree (Legislative Decree no. 22) converted into law no. 41 of 20 May 2019, explicitly aimed at “ensuring financial stability and market integrity, the protection of the rights of British citizens who are resident in Italy, as well as the strengthening of the consular network in the United Kingdom and assistance to the Italian community there”.

We know that around one million Britons live in Europe, of which more or less are sixty thousand are in Italy. We know that free movement for them will continue until the end of 2020 and that, subsequently, they will be able to remain in their country of residence, but it will become more complicated for them to move to other states of Europe, as is the case already for non-European citizens.

The Italian government, on its institutional website, has published a handbook for British citizens in Italy entitled “Vademecum on the registration of citizens of the United Kingdom in the event of withdrawal without agreement“.

The agreement between Great Britain and the European Union states that the Brexit transition will end on December 31st, 2020, and, until then, European regulations on the freedom of movement of people, services, capital and goods will continue to be valid for the United Kingdom.

Changes made during the transition will automatically apply to the UK. European law will also have to continue to be respected by the United Kingdom.

Meanwhile, Europe has initiated the dismissal procedure of British representatives from all EU institutions and governance structures.

The ongoing change is gradual so as to allow citizens, businesses and institutions to adapt while negotiations continue between the member states of the European Union and the United Kingdom, which should continue until October 2020, the deadline to ratify agreements before the long-awaited date of January 1st 2021, when the separation is final.

There is still the possibility, on paper, that by the June 30th, 2020, an additional transitional period (with a maximum duration of two years) may be requested by the United Kingdom, even if the British Prime Minister, Boris Johnson, has so far denied the proposal.

The intent of the governments involved is to “protect citizens who built their lives on the basis of the rights deriving from the United Kingdom’s membership of the EU”.

British citizens in Italy are already protected by Legislative Decree no. 30 of February 6th, 2007, which implemented Directive 2004/38/EC of the European Parliament and of the Council 2004/38/EC, relating to the rights of citizens of the European Union and their family members to travel and stay in the territory of the Member States other than where they have citizenship.

The Italian government has reassured the thousands of British citizens residing in the country that even without “a deal”, they will be able to continue to live, work and enjoy, as much as possible, with the same rights as when they were European citizens.

British citizens, like their family members, who are not resident in Italy, will be able to take up residence in the country even during the transition period. As soon as the separation between Great Britain and Europe is final, there will be inevitable repercussions, which we will try to remedy.

In Italy there is a Brexit Task Force that follows and coordinates specific activities on the subject. With this in mind, the Brexit Decree (DL March 25, 2019 n. 22) which was converted into law. 41 of May 20th, 2019, with the aim to “ensure the financial stability and integrity of the markets, the protection of the rights of British citizens residing in Italy, as well as the strengthening of the consular network in the United Kingdom and assistance to the Italian community residing there”.

In particular, article 14 states that “Provisions regarding residency of United Kingdom citizens and their family members, even if they are not nationals of a Member State of the European Union, are present on the national territory at the date of Great Britain’s withdrawal from the European Union”.

The law says that British citizens registered in the Italian registry and their family members (who are not European citizens), and who are in possession of residency, have until the 31st of December 2020, to request the European residency permit for long-term residents.

If they do not meet the requirements, they can still ask for a regular residency permit, valid for five years and renewable upon expiry.

Following the procedure, in the presence of suitable requirements, they can apply for Italian citizenship or obtain dual citizenship.

Citizens of the United Kingdom are also treated as citizens of the European Union for the purpose of applying for citizenship, but only if they have fulfilled the requisites at the date of implementation of Brexit (31st January 2020) and if they apply by the 31st December 2020.

If an agreement is not reached between the United Kingdom and the European Union, before the transition ends, the Italian government will still take care to maintain the rights of British citizens and their family members with regard to health protection, provided there is reciprocity with the treatment of Italian citizens in Great Britain.

In essence, British citizens in Europe and European citizens in Great Britain will be able to continue to exercise the rights currently guaranteed by European laws, by virtue of the principles of equal treatment and non-discrimination:

You can survive Brexit.

Our Immigration lawyers are available to British citizens who would like to receive clarification on their situation in Italy. Please contact them here.