How to divorce in Italy if you married abroad 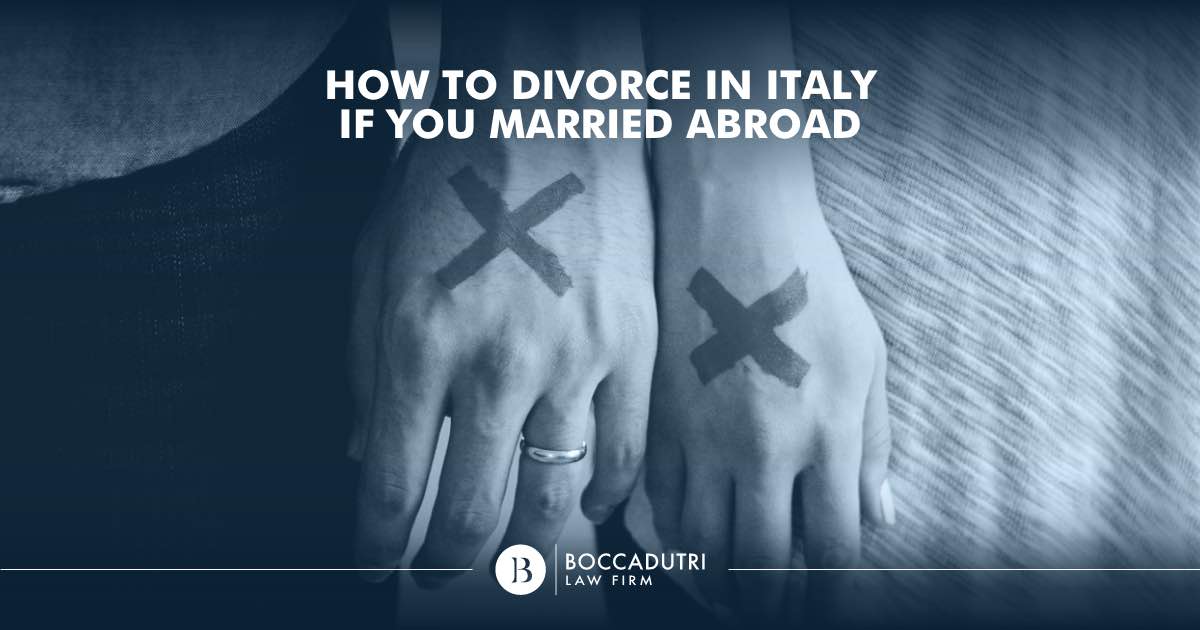 What may be the validity of a marriage between Italians, or between foreigners residing in Italy, or else between an Italian and a foreign citizen, if celebrated abroad? Is it possible to obtain its dissolution in Italy?

It is increasingly common to hear about marriages celebrated abroad between Italian citizens, or between foreign citizens residing in Italy, or between an Italian and a foreign citizen, or else between partners with more than one citizenship, including the Italian one.

As for the conditions to marry, each spouse is subject to his/her own country’s regulation.

In order to be valid in Italy, a marriage celebrated abroad must meet the following essential requisites according to Italian law:

Transnational marriages – based on the principle locus regit actum (meaning that the law of the place where facts occurred must be applied) – are regulated by the laws of the place where they are celebrated but must as well comply with other regulations as for the daily married life.

A marriage which is celebrated abiding by local laws – as long as they are not in contrast with the ones of the place of origin – is fully-fledged valid in Italy, with all that this implies.

During the phase called exequatur – meaning the judicial procedure which is necessary to have a foreign provision recognised in another country – the Italian judge must verify the correct form of the marriage and its compliance with the law but has no power of verifying the content of the relationship.

A marriage celebrated abroad is recognised in Italy through the procedure called exequatur. Without this necessary step, it cannot be registered on civil registers, yet it maintains its validity.

According to Italian law, the act of registering the marriage does not give effectiveness to it but it is a way to simply certify it, considering that the marriage celebrated abroad is immediately effective.

If a marriage is not registered, the only consequence spouses may incur is a sanction, because in Italy the registration of marriage into civil registers is compulsory.

The relationship between spouses

The relationship between two spouses married abroad is regulated by the laws of the country they have in common or – in case they have different nationalities – of the country where they reside as a married couple.

The same criteria are applied to the economic relationship between the spouses, though they may decide that the laws of the country of origin or of residence of at least one of them are to be applied.

In order for this decision to be valid, it needs to be specified in writing and signed by both spouses.

Transnational marriages mean transnational divorces. Law n.218 of 1995 regulating marriages is also applicable to divorces, as well as the European Regulation 1259 of 2010.

In case of separation/divorce of a couple where at least one of the spouses is a foreign citizen, the law of the nation in common or of the nation where the couple have spent most of their married life has to be applied.

In Italy divorce is preceded by legal separation, but not all countries apply the same rule. For this reason, those who reside in Italy but married in a country that allows couples to divorce without going through the legal separation phase, may divorce before an Italian judge requesting – in agreement with each other – to end their marriage without undergoing a legal separation.

When spouses agree with each other, it is more likely to find a common solution which is more convenient for both, which means to apply a law which is less intricate.

In case of consensual divorce, it is possible to choose among:

In case of judicial divorce, the choice is among:

For any doubt or request on marriage and divorce, do not hesitate to contact our experts in Family Law at Boccadutri International Law Firm.