Hammering down on foreign license plates 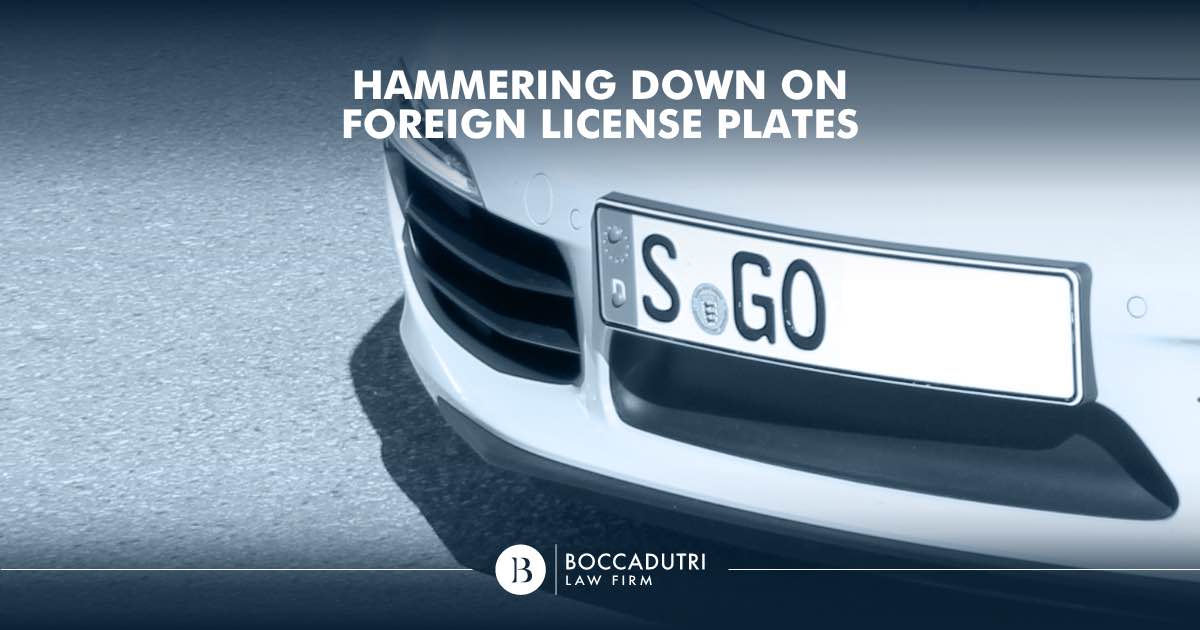 Recently enacted Law 132/2018 has lowered tolerance in regards to those travelling with foreign license plates.

Law 132/2018 (conversion of the Security Decree containing urgent provisions on international protection, immigration and public security) reviews the situation of those travelling in Italy in vehicles with foreign registration plates.

Those who reside in Italy for more than 60 days (which therefore excludes tourists travelling throughout Italy by car) will not be permitted to drive vehicles with foreign plates (exemptions will be made if proof of a lease with foreign companies with which they are employed can be proven).

If caught using foreign license plates beyond the limit of 60 days, possible confiscation of the vehicle or fines (with a maximum penalty of €2,848 and a minimum of €712) will result. After vehicle confiscation or fines have been issued, the person in possession of the foreign license plates has a maximum of 180 days to change the plates locally or to get rid of the vehicle.

If these requests are not made by the 180-day mark, the vehicle will be seized indefinitely by the Italian authorities.

The new rules put to a halt the current practice of exterior dressing, ie the expedient practice of acquiring an apparent tax residence abroad, which amongst many other things, allows one to obtain foreign license plates.

In practice, if the vehicle circulates almost exclusively in Italy, there is no valid reason to be in possession of a foreign license plate.

The ultimate purpose of using foreign plates are to aid in the practice of tax evasion, insurance obligations and avoiding fines for traffic offences. The foreign number plates relieve the drivers even from the minimum obligations of civic responsibility, in case of accidents.

The phenomenon is widespread, especially in the north of Italy, where it is not uncommon to find cars registered with foreign leasing companies market to Italians. A widespread habit of foreigners residing in Italy is the renewal of insurance in their country of origin to save on stamp duty and insurance and, perhaps, to make their whereabouts more difficult to trace. It is undeniable that there is a risk that illegal evasion will be utilized in order to circumvent the new law.

In the view of the law, short-term rentals have also proven to be a dangerous option which has been utilized by terrorists in the past, such as in the attacks on Nice and Barcelona.

To prevent vehicles being leased to suspicious individuals, at the time the lease is signed, operators are required to record customer data and promptly communicate it to the police corps database (SDI). The police will then be able to verify that whoever requests the rental will have no such precedents, or that they are not classified as a dangerous individual. This practice will enable authorities to take immediate action in the prevention of acts of terrorism.

Before entry of force into law,  owners of foreign license plates will receive up to two immediate re-registration notices, to allow enough time to replace the foreign license plates with Italian ones, while a penalty ( with a maximum of 335 euros) will be issued only in the event that the car is found to have not complied three times within a six month period.

For those who are able to prove that they drive the vehicle with a valid loan, leasing or rental agreement, sanctions will not be issued. In the event of questioning by Italian authorities on the validity of the foreign plates, you must have in your possession a document that clarifies the terms of the loan/lease/ rental.

One of the communities most affected by the new measure is the Romanian community, as they were quick to demand clarification from the Ministries of Interior and Transport.

In Europe, Directive 2003/564 / CE applies, which involves automatic insurance coverage of European vehicles circulating in EU countries. In principle, it is not required to verify the civil liability insurance as it is subject to the “agreement between the national insurance offices of the member states of the Economic Area European and other associated States”. Several vehicles will be repatriated when the law comes into force.

In the event you move to Italy or have problems with foreign-registered vehicles, our legal experts from the Immigration Department will assist you in your native language. You can contact them by filling out the request form here.