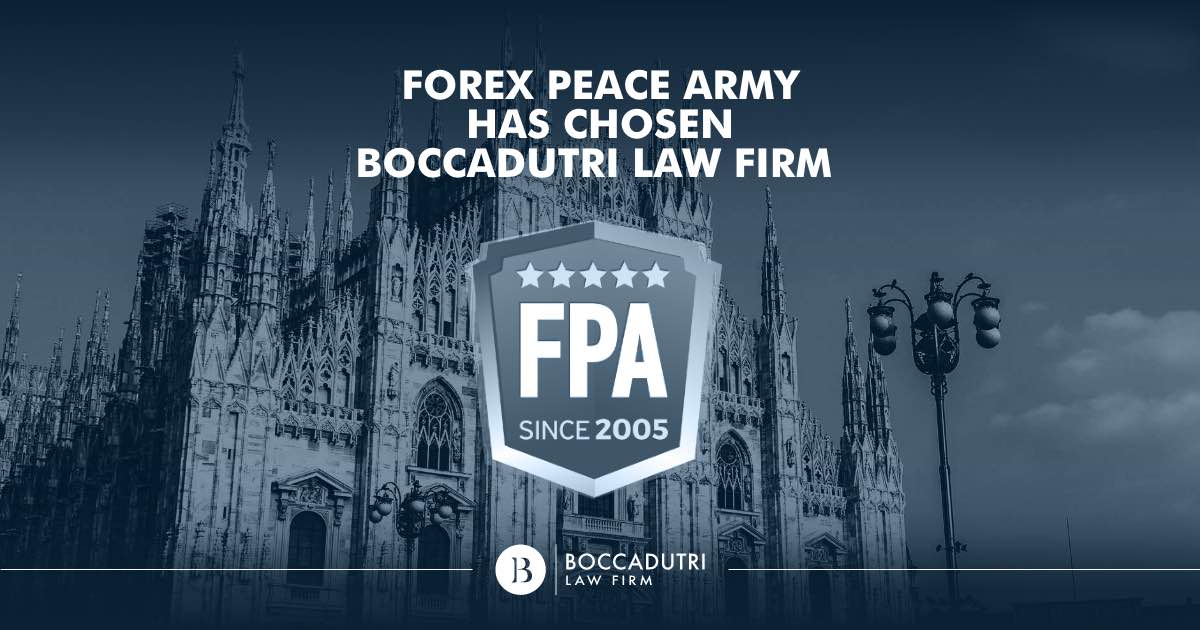 Through this collaboration, Boccadutri Law Firm aims to assist and help people who have lost money in forex trading through mismanagement or a scam by a forex broker.

We are Boccadutri International Law Firm, with offices in Italy (Palermo, Rome, Milan), Rio de Janeiro, London, New York, Bucharest, Barcelona, Krakow, Istanbul, Moscow, Sydney, Nicosia and Rosario. We have a highly experienced Forex resolution department, headed by the Managing Partner Calogero Boccadutri. Because of the evasive tactics often used by fraudsters in this field, this experience really does matter. There can be intricacies and complications that must be understood and appreciated for any resolution to be reached.

International Forex scams and frauds have been pursued many times by the expert lawyers at Boccadutri International Law Firm.

From our understanding, the problems facing clients predominantly involve the company’s refusal to let the client withdraw funds that they have invested.
Most Forex fraudsters initially claim to offer high profits at a low risk, citing some form of insurance against losses, and thereby leading the client to believe that their investments are risk-free.
The issues arrive either with the mismanagement of the funds, that is to say through trades that have not been certified by the client, as well as refusal to permit the withdrawal of money.
It is also often the case that an uncertified “bonus” is added to the account, preventing the client from withdrawing. Another common theme is that there are “turnover requirements” for the withdrawal of money, which is a part of the fraudster’s attempt to continue to encourage the client to invest, and therefore lose, more money.
These requests for further investment often go hand in hand with uncertified bonuses being added to the account.

The employees of the company are also usually evasive and difficult to get hold of: once money has been invested, the customer might be transferred to another supposed employee, or worse, the supposed employee may start responding to messages very sporadically, or not at all.
Given that this is the general theme of the Forex fraud cases that we deal with, it can be difficult to trace the exact premises or addresses of the offices of the companies. In fact, most addresses used bear no resemblance to the actual physical location of the fraudsters, who might in fact be in Israel for example, from where they might target foreign victims.

Given the difficulties outlined above, our technique initially consists in sending letters of complaint and pre-action detailing the exact crimes of the fraudsters, in an attempt to reach an out-of-court settlement, which would mean the return of the client’s investments.
This tends to mean the threat of legal action against the company, if the matter is not resolved and the money not returned. This has been a technique that has worked in the past, and funds have been returned.
However, if the company makes no contact or is evasive in their responses, then the matter is reported to the relevant international authorities, namely a Financial Ombudsman or even the FBI. Again, some cooperation from the fraudsters does result from these actions and investments can be recovered, especially with the threat of the involvement of international authorities.

To give a picture of the techniques used against us, denial and evasion are generally employed, as brokers claim that they are not responsible for the mismanagement: it is sometimes blamed on a technical failure.
Similarly, they may try to obfuscate the situation by saying that the payment or chargeback to the client has been made but not fully processed.
Generally, mention of a third party is involved to try to avoid taking responsibility for the crime. What leads to most success, and something we pride ourselves on, is perseverance.
If the website of the company still claims that the company is giving investment advice or if the money has still not been returned to the client, a liquidator or administrator may come in to play, in which case drafting a proof of debt can help to recover a client’s funds.
If the broker is regulated, then it can also be effective to correspond with the regulatory authorities.
After communicating with the broker directly, we might file a claim to the administrator on behalf of our client and then follow up the eventual proceedings.
These have proved to be the most effective techniques, and recent news suggests that the techniques we use and the involvement of the appropriate authorities can, and do, lead to a successful outcome for the client.

If you need any further information please contact the Managing Partner, Calogero Boccadutri, and the International team of Forex lawyers will get back to you as soon as possible.