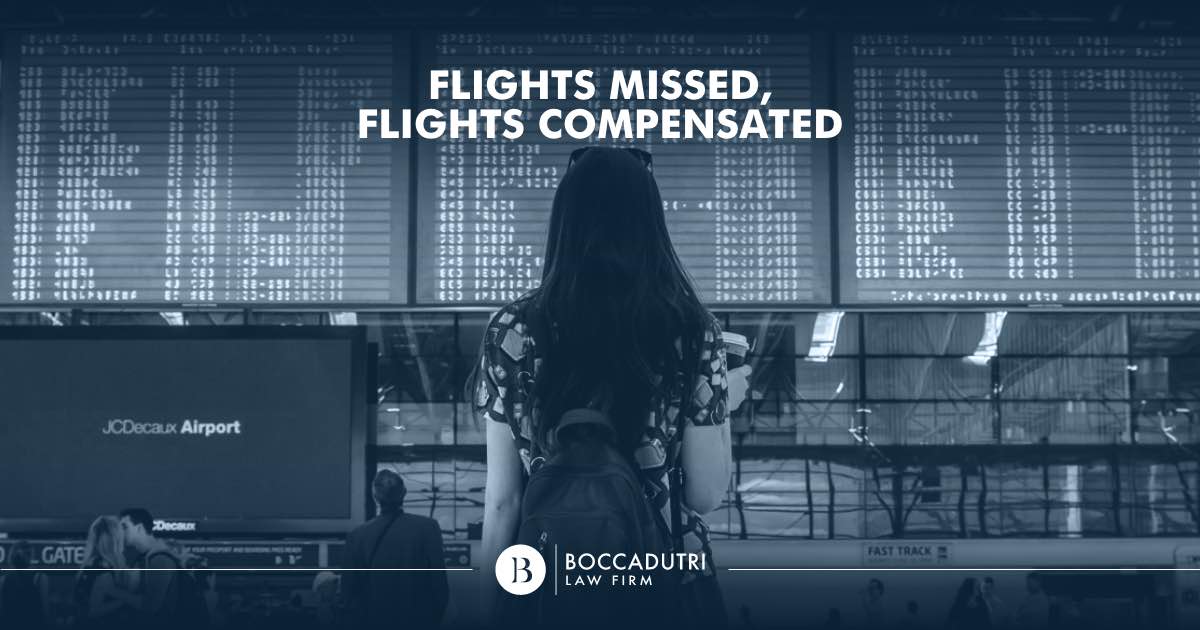 To protect passengers from missing a flight, the CE has given a ruling that sets out clear rights and secures compensation.

In summer, people fly more regularly and, probably because of this, flying can become more difficult. A cancelled or late flight leads to a series of consequences that weigh on both our mood and our pockets.

The compensation goes to the passenger who has missed out, as per the Bill of Rights of the Passenger written by the Enas, The National Body for Civil Aviation, as well as the appropriate authority on the subject of aeroplanes.
The Ruling of the European Community 261/2004, “which establishes common rules on the subject of compensation and assistance to passengers in the case of being denied boarding, cancellation of the flight or an extended delay”, sets out for every cancelled flight or one that has a delay of longer than three hours, or you could be entitled to €250 to €600 of compensation, based on the distance.

You have the right to compensation if…

The right to compensation depends on some circumstances. Above all else, delayed or cancelled flights must be for routes within the European Union but can be managed either by an aeroplane company in the European Union or extra-European. If the flight lands in an EU country from a country outside the EU and is managed by a European Airline.

If the flight takes off from inside Europe but lands in a country outside the EU and is managed either by a European or foreign airline.

You do not have the right to compensation if…

If you have already been reimbursed with money or have benefitted from a compensation flight, or of compensatory assistance.

You do not have the right to compensation if the connection is missed because of delays at security or because the embarkation times at the airport where you had to carry out the stop over had not been respected.

In European Union countries, which includes the 28 official members, plus Guadeloupe, French Guyana, Martinique, La Réunion, Mayotte, Saint Martin (French Antilles), the Azores Islands, Madeira and the Canary Islands, as well as Iceland, Norway and Switzerland.
The United Kingdom, despite the fact that Brexit is being carried out, is still currently considered an EU country. The Faroe Islands, the Isle of Man and the Channel Islands.

Cancellation of the flight

A cancelled flight is one that does not leave, since as a rule it is substituted by another, but also one that after take-off is forced to turn back.
If the flight reaches an airport that is different to the original destination indicated on the ticket, it can in turn be labelled as cancelled, unless the passenger has accepted it as an alternative to the initial flight.
In this case, it is classed as a delay but not a cancellation. Even in cases in which the flight reaches an airport that is found in the same city or region as the one that was originally planned, it counts as a delay and not a cancellation.

A cancelled flight grants the right to compensation, to another flight or return flight.

It can happen that once check-in has been reached boarding comes/is denied. The most common cases are:

If boarding were to be denied for “operational reasons” or because of overbooking, a voluntary surrender involves, beyond compensation, the possibility of choosing between compensation, an alternative flight on the same day or another date. Moreover, assistance must be guaranteed.

The rights for those that could not fly

Beyond compensation for the ticket for those that could not fly, there are circumstances that cause trouble, as a consequence of the first missed flight, are also successive flights, so-called connections.
In this case, a return flight to the airport of departure will have to be set out for the user, or boarding a replacement flight towards the final destination, that respects the same conditions as for the missed flight.

The airline is supposed to offer an alternative flight or a return flight, whether it be with the same conditions as the missed flight or not.
In case it does not provide an alternative to mere compensation, and the refund corresponds directly to the original ticket, the passenger will have the right to the difference in price in relation to the newly missed ticket, in analogous transport conditions.

The outgoing and return voyages are considered two distinct flights even if they were booked together.

It can also happen that the flight is not cancelled but simply, so to speak, delayed. In this case the user has in any case the right to assistance on the part of the aviation company or rather, if the particular circumstances require it, to compensation for a return flight, based on the duration of the delay or the distance covered by the flight.

Whenever you reach your destination airport with a delay that goes over three hours you have the right to compensation.

This right is lost only in case of “exceptional circumstances”, that is to say situation that the company would not have been able to delay, while adopting all sizes of the case.

If you accept substituting your own flight with another with a different destination from the one indicated in the booking and this flight has a delay, you have the right to compensation.
The company will have to take charge of the transfer costs between the airport in which you arrive and what originally should have been the destination.
The company and the passenger will be free to comply with a potentially different destination, with costs that are always at the expense of the airline.

A flight can bring a delay or be cancelled because of “exceptional circumstances” not attributable to the conduct of the airline. This means all extraordinary arrangements on the management of air traffic, situations of political instability, strikes, unfavourable weather conditions or any type of risk for the security of passengers.

Technical problems, unlike what came to be established in a recent past, exceptional circumstances are not considered, above all if blamed for incorrect maintenance of the aeroplane.

Compensation for change of class

Going up a travel class, for reasons that can be traced back to the airline, cannot mean the payment of any surcharge.
If you are forced to travel in a lower class, it gives you the right to compensation of a percentage of the price of the ticket based on the length of the flight.
Flights up to 1,500 km will give the right to compensation of up to 30% of the price of the ticket, beyond 1,500km and up to 3,500km on European routes, give the right to keep 50% of however much was paid. The compensation goes up to 75% in case of longer flights or with destinations outside the EU.

This type of compensation is paid within 7 days.

Loss, damage or delays on baggage reclaim, which was recorded, grants you the right to compensation of up to around €1,220. The compensation includes cases in which hand luggage is damaged.

Claims for the return of baggage can be made to the airline within a week of baggage claim, or rather within 21 days if this is late.

The refund is due and is requested

Only 1% of passengers end up following up their claim to obtain what is due to them.

Perhaps not everyone knows that they have three years to assert their rights in case of delays or flight cancellations.

If the flight is cancelled or surpasses a three-hour delay you have the right to a refund.

When you request recognition for the rights of disappointed users, the risk is not following the correct procedure and seeing the sacred refund, which is why the advice is always to turn to a professional.

Our expert lawyers will be able to guide you in the compilation of the refund request. If you have doubts on rights do not hesitate to contact them by requesting a legal consultation.