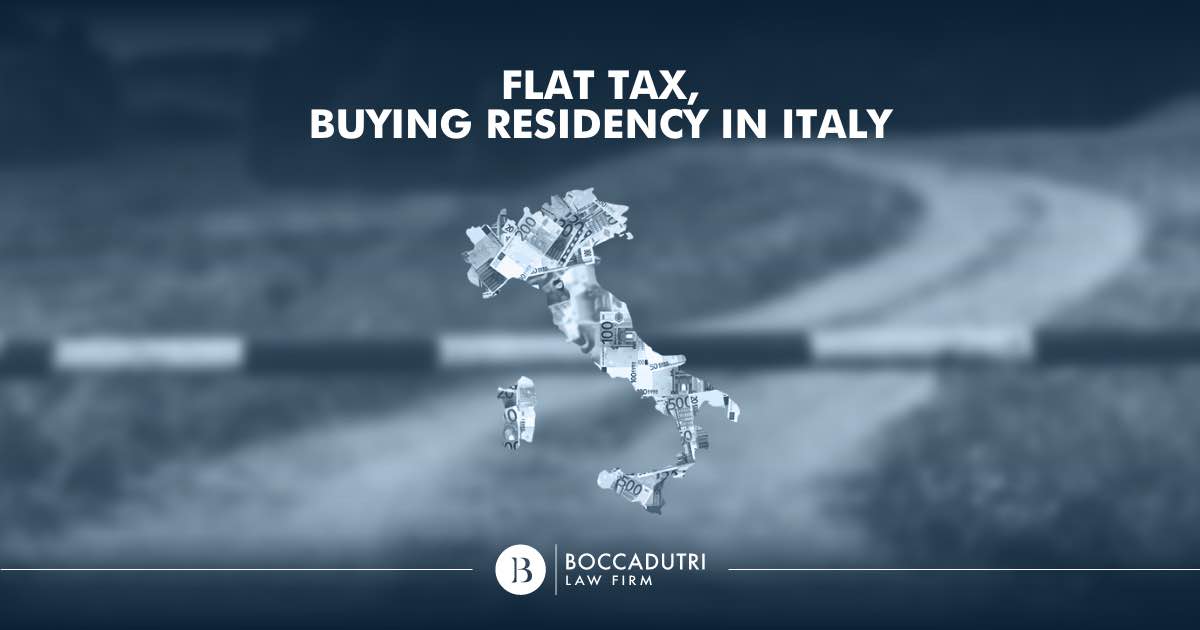 With the Flat Tax, a fixed tax for those who decide to move country, post-Brexit Italy opens its doors to the rich and is adapting to the rest of Europe.

Foreign citizens (or nostalgic Italians) who want to transfer their fiscal residency to Italy will be able to do so by paying a hundred thousand euros to the Italian State every year, to make up for the revenue generated abroad.

It is to do with a substitute tax that aims to attract “High Net Worth Individuals”, wealthy foreigners (and their capital), to Italy.

The so-called Flat Tax was put into the 2017’s Budget Act with the clear purpose of favouring the entry of particularly wealthy individuals and their families.

Indeed, if the interested foreigner can sign up by paying an annual fixed tax of a hundred thousand euros, to meet the requirements of the Italian tax authorities, all of their relatives will agree by paying twenty-five thousand euros.

Two of the essential requirements are the financial capability to pay the tax without batting an eyelid, and residency abroad for at least ten years, corresponding to a minimum of nine tax periods (taxes would need to have been paid abroad because potential evasions would not be spared).

Those who subscribe to the Flat Tax will also be “spared” the payment of inheritance taxes for their property abroad. The renewal will be automatic for 15 years.

Italy has put itself forward in such a way in order to attract investment from those that could give up residency in Great Britain, when modifications will be applied to the fiscal regime for those who reside in the United Kingdom but do not have a residence there.

The change is notable because it exchanges one favourable regime for a more burdensome one.

Italy has not invented something new, in Spain a norm of this type has already existed for twelve years and allows the payment of just 24% of taxes on revenue produced in the country, as if a salary of a thousand euros a month were made.

The curiosity is that it came to be called the “Beckham law” because it was launched when the English footballer joined Real Madrid.

From then, it is easy to understand why the Spanish league became attractive to foreign footballers all of a sudden.

In 2010 this law had been revised however, excluding footballers and all professional sportsmen generally, and limiting itself to individuals with salaries lower than six hundred thousand euros.

Above six hundred thousand euros, the share rises to 45%. In Spain, unlike in Italy, a portion of income earned must be generated in the country itself.

The small island of Malta opened its doors to “well-off” foreigners, guaranteeing a share of 15% to all who earn more than seventy-five thousand euros.

With revenue higher than five million euros you can be granted the additional luxury of not paying tax. Taxes are also lifted for income earned elsewhere.

Requirement: to be a professional with a high level role within a company.

Signing up to the Flat Tax

If you do not want to wait for the income declaration to be applied, you can in the meantime propose a request to the appropriate department in the Italian Agency of Revenue.

If you think you have the right requirements and like the idea of moving to Italy, do not hesitate to talk to our expert lawyers.

They will be able to guide you and advise you on the best possible route, clarifying any doubts you may have and assisting you in your native language.

You can contact them by filling out the request form here.