Divorce: The Supreme Court is changing the maintenance allowance regulations 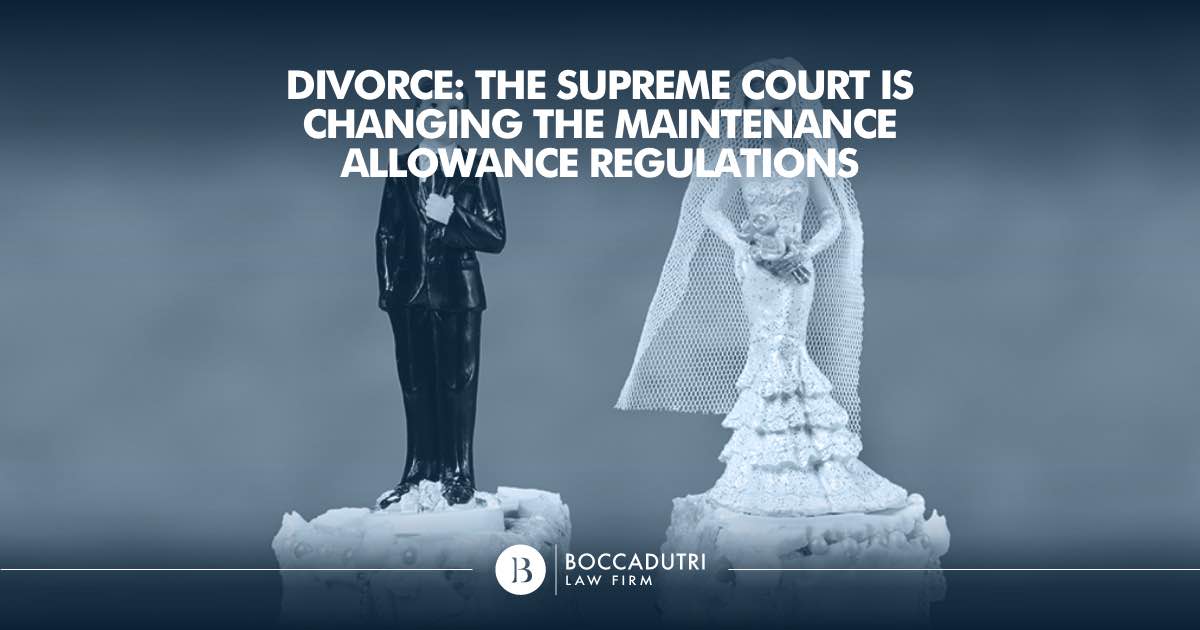 On 10 May 2017 a new page was written in the history of divorce. Supreme Court ruling no. 11504 established that a self-sufficient ex-spouse does not have the right to ask for maintenance allowance from the other, even if they are well-off, because you cannot expect to maintain the same standard of living as you were accustomed to whilst married.

A revolution in Family Law, the Supreme Court is redrawing the maintenance allowance.

With an historic sentence, the criterion of quality of life, which in some cases has meant substantial monthly allowances to fortunate beneficiaries, whilst supplanting as a parameter for defining the assignment of contributions, the loss of self-sufficiency.

Those who are independent enough to be able to provide for themselves do not need money from their ex-spouse. Sentence no 11504 from 10 May 2017 issued in the first civil section was clear about this proposal.

Marriage reviewed by the Court

Getting married is not a constriction but an “act of liberty and self-responsibility”, judges have observed, once the marital bond has dissolved, the sentence implies, the ex-spouses end up being individuals, without a need for assistance.

The accumulation of wealth on the part of the ex-spouse will no longer be possible for those who already have the means to provide for themselves.

Furthermore it is undeniable that having to pay a lavish allowance to the ex-spouse could compromise the formation of a new family or could simply hinder one of the two to make another life, thereby violating their rights.

The casus belli: how the sentence came to pass

The marriage between an ex-minister and an entrepreneuse, whose marriage came to an end in 2013, gave life to the ruling.

Notwithstanding the ”severance pay” of two million euros, pending separation, the ex-wife claimed that the husband had paid a divorce allowance to her.

Milan’s Supreme Court in 2014 denied her the allowance, basing their refusal on documentation that didn’t show income.

Furthermore it had emerged that the assets of the ex-husband were no longer as fluid as they were during the marriage.

The woman had reacted to the ruling by making recourse to the Supreme Court.

If the result were similar to that of the Milan Court, it was this that led to the verdict.

The highest judges have corrected this, underlining how times have changed and that marriage cannot mean “life accommodation” for the spouse that is in an economically weaker situation.

The judges of the first section of the Supreme Court have given detailed indications of the parameters that they have borne in mind to arrive at the verdict.

The distinguishing features were the possession of income of any type, the possession of property resources and work opportunities, without impediments of health, age or the situation of the job market, and the possibility to enjoy residency.

Those who request the allowance must demonstrate that they need it, the other spouse will in any case have the right to exception and will be able to oppose it by supplying appropriate proof.

The importance of the Supreme Court ruling

The Supreme Court’s ruling makes a small opening for all those who already make a monthly payment to their ex-spouse in that they will be able to ask for the revision of the maintenance allowance.

It is specified that it is not a question of the law but of a ruling, even if the Supreme Court makes an announcement, it becomes an authoritative source for future discussions before the judges of the high courts.

If it is to be announced for a certain situation, the Supreme Court handles “nomofilachia”, or rather the law is levelled out, meaning that how to apply is indicated as a determined regulation from then onwards.

The same effect is also gained if the Supreme Court releases, for the same dispute, more rulings that apply the law in a concerted way.

The principle of “living standards” has been resisted since 1970

In 1970, law 898 introduced divorce in Italy, from then the whole law has remained steady in the retention of the duty to pay to the spouse that is in a weaker economic position the support enough money to maintain a lifestyle similar to the one they had whilst married.

But recent changes, as have already happened in other countries, require legal guidelines.

It could also be that sooner or later the terms of divorce before marriage could change.

And while in Italy the rule has changed, the court of English Justice condemned an ex-oligarch to spend 453 million pounds, or 537 million euros to their ex-wife plus a “small annuity” of 5 million pounds allowance per year.

The worry for women is is that by paying those that are less well-off, they become relegated to the role of family support, apparently fruitless but in fact fundamental in the couple’s economy.

In essence, if the woman were paid for the activities that she carried out at home, including those “away from home”, she would earn around 3,045 euros a month, as much as a manager or doctor.

This is not a figure picked out of the air but an amount calculated by ProntoPro.it, a site that brings supply and demand together.

Those with an average to low salary who are at the same time paying a mortgage on a house in which they are no longer living, plus an allowance to the ex-wife, will look at the sentence of the Supreme Court with confidence.

There are many stories of men reduced to poverty by divorce.

Two points of view, two reasons, two injustices, it is always and in any case up to the judges to evaluate the stories, because every case is different and deserves to be handled appropriately.

Our expert Family and Divorce lawyers are available to you to examine your case and to taken on the divorce process together, in search of the most appropriate solution.