Custody and Maintenance of Children in Italy 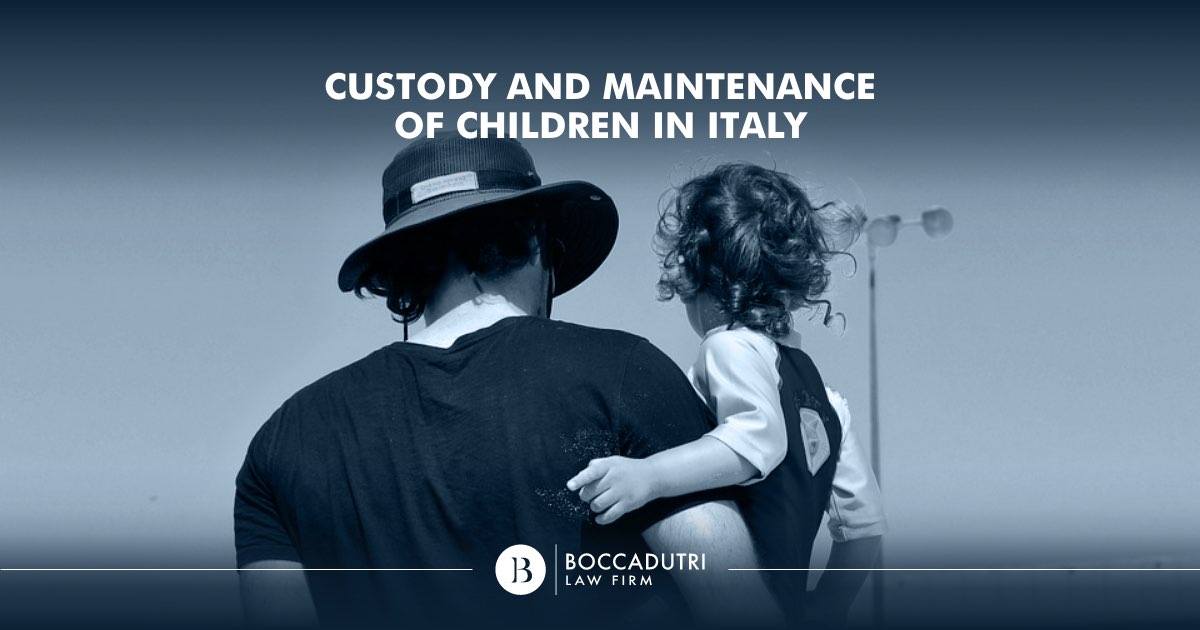 The “custody and maintenance of children” are measures aimed at regulating responsibilities of parents following a separation.

The measure of custody of children is required in cases of personal separation, divorce or distancing of parents, whether married or not.

In 2012, law 219/2012 took an important step towards recognising the dignity of all children and parity between parents with the first fundamental reform of filiation.

Legal equality between all children was recognised, whether they were born within or outside of wedlock.

Previously, law 54 of 2006 had simplified the subject of child custody, getting rid of the many different typed of custody and limiting it to just two categories: shared custody and exclusive custody.

Act 316 of the Civil Code: “Both parents will have responsibility for their children, which shall be exercised by mutual agreement taking the capacities, natural inclinations and aspirations of the child into account. The parents shall by mutual consent decide the primary residence of the child.

Article 337 of the civil code lays out that the judge “shall give priority to the possibility of minor children remaining in the care of both parents or of one parent to whom the children are entrusted.”

To protect the minor and safeguard their interests, the parent to whom he may be entrusted must be in a position to provide them with adequate mental and physical support and must be able to provide a safe living environment, in which their physical and emotional needs may be provided for.

The Law states that these provisions apply “in cases of separation, dissolution, stoppage of civil effects, annulment, and in proceedings relating to children born out of wedlock.”

When a couple leave each other, separate or ask for a divorce, it is up to the judge to deal with the custody of any minor children.

First of all, it must be decided where the child will live so that they may have a stable residence in the house of one of his two parents.

This arrangement serves to stabilise the minor’s residence

Custody is divided into the following categories:

Shared custody is currently the method preferred by judges when they have to express an opinion on the matter.

This is based on the theory of bi-parentship, according to which a child has the right to maintain a stable relationship with both parents, who are equally responsible for the child’s care and education, and who should, in the same way, make decisions relating to schooling and health.

Shared custody of the children, while providing that the children reside predominantly with one of the parents (the custodial parent), does not limit the time spent with the child for the other parent, who has the right to see them freely.

Both parents must collaborate and agree in order to make decisions in the best interests of the child.

Each parent is obliged to contribute to the maintenance of the child in a way that is proportional to their respective income. If the judge deems it necessary, they may set up a regular payment scheme at the expense of each of the parents corresponding to such an amount that may be deemed to respect the following criteria of proportionality.

The maintenance contribution may be worked out according to a number of different factors:

The alternative to shared custody is exclusive custody. Usually this is required in the case that one of the two parents is not suitable for the role that they should play in caring for the child.

This is also applicable in cases where the parents are not married.

Clearly, the exclusive custody of a child is not always the result of a domestic conflict, but can be a broader reflection on the immediate interests of the child.

Prerequisites to ask for exclusive custody:

Situations which shall not lead to exclusive custody

How to obtain exclusive Custody

In order to obtain exclusive custody of a child, it is necessary to present the specific case to a judge, at any time, even in cases where a judge has already established shared custody of the child.

The assessment is always up to the judge who may, in the event of suspicion of the illegality of the request, reject it as manifestly unfounded. If, however, the court considers that this is in the best interests of the offspring, it will grant an application for sole custody.

There is also a third possibility, namely that both parents apply for sole custody. The decision is always in the hands of the judge, who will decide on the basis of the best interests of the child.

Exclusive custody entails a series of obligations for the parent to whom the child is entrusted. This situation of exclusive custody does not deny the other parent the right of access to their child or the right to participate in significant decisions concerning the child. The former of these rights will, however, be limited (in time and manner) according to the decision made by the court.

It is also possible for a situation to occur whereby these rights n(right of access to child and right to participate in significant decisions) are denied by the court due to the conduct of the parent, or where there is a need to establish a ‘neutral’ place where meetings should take place, and to ensure that such meetings only take place in the presence of a third party, who will have the role of overseer (mostly social workers in this case).

If the decisions taken by the parent with custody are contrary to the will of the other parent, these decisions can be brought before the judge for arbitration.

Super exclusive custody is a sub-category of exclusive custody. It is considered only in exceptional circumstances (Article 337-quater, paragraph 3, of the Civil Code, introduced by Legislative Decree No. 154/2013), when one of the parents is unsuitable for the role he or she should play, due to incapacity or disinterest (material or moral).

It is up to the judge, if necessary, to decide whether or not to pronounce parental disqualification for the person he or she deems unfit for their role.

Custody of children in the case of unmarried couples

In the specific case of unmarried couples who may either be a de facto couple or may have never been a couple, the custody of children follows the same rules as for children born to a married couple. The basic principal of bi-parentship doesn’t change, both having the same rights and parental authority over the child.

Clearly, the child must have a stable home with one of the parents, but even in this the situation is the same as it would be for married parents, the only difference being that use of a judge is optional and that verbally reached agreements are considered sufficient. If the couples do wish to ratify the agreement formally, however, then they are able to apply for shared custody.

Equally, if no such an agreement can be reached between the two parties, they may apply for formal sole custody of the child.

The competent court for this kind of request is not a youth court but a normal court.

“Each parent is responsible for the maintenance of their child, in proportional accordance with their salary.”

In the case of a shared custody it is usual to opt for a form of direct maintenance. The maintenance sums for the offspring are agreed by the parents.

If the parents are unable to come to an agreement, it is the responsibility of the judge to decided whether one or both parents should pay for the maintenance of the child. In this case, the amount must be established, following a number of criteria:

If the parents do not possess sufficient means to ensure the wellbeing of the child, it falls to the parents’ families to help to provide for the needs of the child, so that they may fulfil their parental obligations. If a parent does not comply with the agreed contribution to maintenance of their child, they will be subject to serious legal consequences.

The question of jurisdiction in cases of separation under international law has been subject to numerous judicial rulings.

A concrete case, for example, concerned the legal separation of an Italian Citizen and a British Citizen, married in Italy and subsequently parents to a son with whom the mother returned with to the UK following her separation from her husband. (SS. UU. Cassazione sent. 17676/2016).

The criterion of habitual residence is also referred to in the 1996 Hague Convention on Jurisdiction, Applicable Law, Recognition, Enforcement and Cooperation in respect of Parental Responsibility and Measures for the Protection of Children, which applies in respect of signatory States that are not Member States of the European Union and, following Brexit, also in respect of the United Kingdom.

The Court particularly clarifies that in the case that the child is not habitually a resident in the EU Member State where the separation proceedings are taking place (as in the case mentioned) the child’s best interests, together with the criterion of proximity, require that the two legal proceedings be separated and that the court in charge of the first matrimonial proceedings should not also be given jurisdiction to hear claims relating to parental responsibility, if responsibility is not accepted by the agreed spouse and does not correspond to the interests of the minor child.

As regards the child’s habitual residence at the time of the application, which under Article 8 of the Regulation must be given priority in order to establish jurisdiction in matters of parental responsibility, the judges of the Court of Justice have specified, as a general principle, that the place of the child’s concrete and continuous personal life must be considered to be their habitual residence (in accordance with the well-established interpretation of the case-law).

The Family Law Department of Boccadutri international law firm offers legal assistance and support in cases where there is any doubt over the maintenance or custody of children.