Compulsory insurance protects heirs but they might not always know it 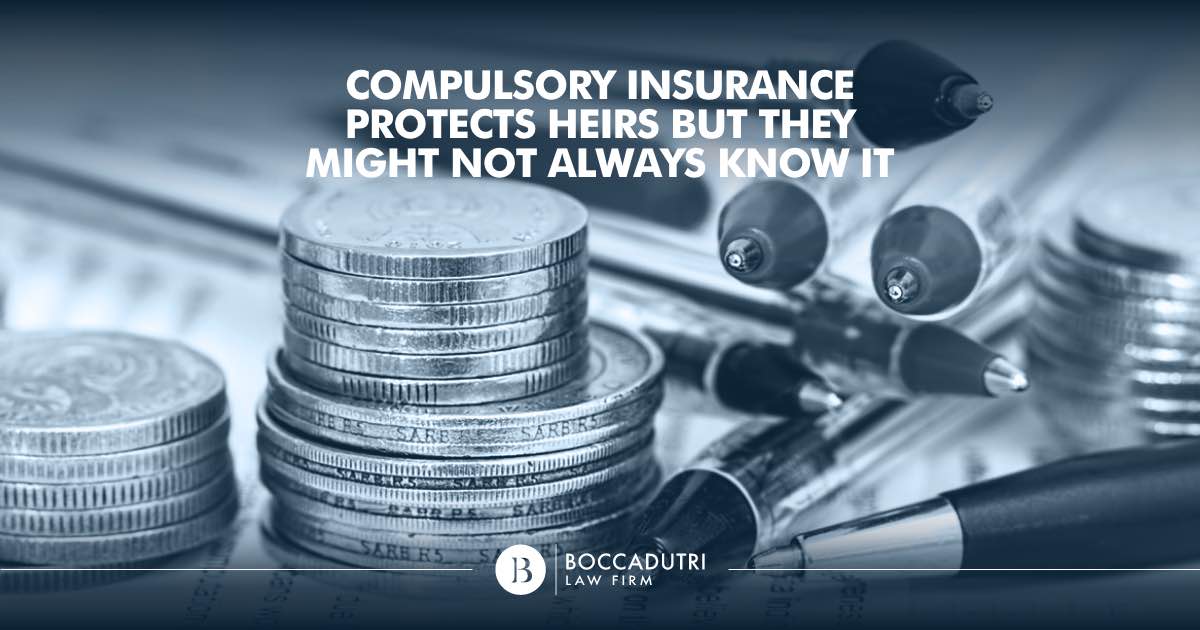 The Istituto Nazionale per L’Assicurazione Contro Gli Infortuni Sul Lavoro (Inail) identifies a fee for the relatives of those who die at work because of accidents or occupational illness.

Even though workers’ conditions might be better than they were in 1965, the year of the “Test of availability for compulsory insurance against accidents at work and occupational illnesses”, people are till dying at work every day.

For the relatives of victims of accidents at work and occupational illnesses safeguarding, sanctioned by d.p.r.n. 1124/1965 does exist, with modifications created in the Law established in 2014.

The Inail grants the relatives of the deceased worker an annuity to which they have the right from the day after the death.

This income is supplied in a process and at different times based on the person who has the right to it.

The condition for having access to the sum is that the death of the worker must be caused by an accident or occupational illness. From the 17 May 2006 the possibility for the survivors to have the fee is also laid out for cases of domestic incidents.

The expert Probate lawyers at Boccadutri International Law Firm help heirs to claim back what is owed to them.

Who is due the income?

50% of the income is owed to the spouse until they die or remarry. 20% goes to each of the legitimate, natural (recognised/acknowledged or recognisable) and adopted children.

Orphans from the other parent will also have access to 40% of the total.

Children and siblings, if the latter are cohabitant and dependent on the deceased, keep their right to the income until they reach 18 years of age.

If they are still at high school, in the case of dependent living and without paid work, this can be extended until they are twenty-one.

This extends to 26 if you follow a normal degree course, which subsists dependent living and lack of paid work. Adults unable to work can benefit from it as long as the incapacity lasts, whereas someone who is indefinitely incapacitated has the right to it until their death.

The basis for calculations to determine the total amount of compensation has had an immediate variation starting from the 1 January 2014. Previously it was identified among the annual compensation effective to the worker and it respected determined limits put in place by the d.p.r. n. 1124/1965. Since the law being set out in 2014, the figure is based on the maximum compensation established by the industry sector.

The fee is not due to the survivors of workers not subject to mandatory insurance protection laid out in the one text no. 1124/1965 and in law number 493/1999.

Communication with Inail triggers the fee

The fee is normally distributed after the statement from the employer.

If this person fails to communicate, Inail can proceed on the heir’s request, based on the health documentation received.

The Inail is, in any case, supposed to communicate with the survivors the possibility of presenting the fee request.

In case of lost documentation it is advisable to speak to a lawyer in order to ask after and obtain what is owed to you.

From the date of receipt of the communication the survivors have 90 days to be able to submit the request.

Our expert Probate lawyers are at your full disposition for a consultation, necessary to understand to what type of reimbursement you have the right.

The survivors of workers who have died in accidents at work or occupational illnesses, or rather, anyone who proves that they have paid for the costs, they also have the right to a funeral reimbursement grant.

If you have reason to believe, or are sure, that a death at work is a case for the employer, the heirs of the worker can also claim back compensation for the emotional damage done and the psychological or physical damage to the person.

If after the incident the worker survives for a substantial amount of time they can pass the compensation for the subsequent physical damage to the heirs.

Boccadutri International Law Firm will be able to protect you in your worst moments, when you have been shaken up by your recent loss, and will lead you to safeguard yourself and your children.

For more information or an initial consultation, you can fill in the online form here.