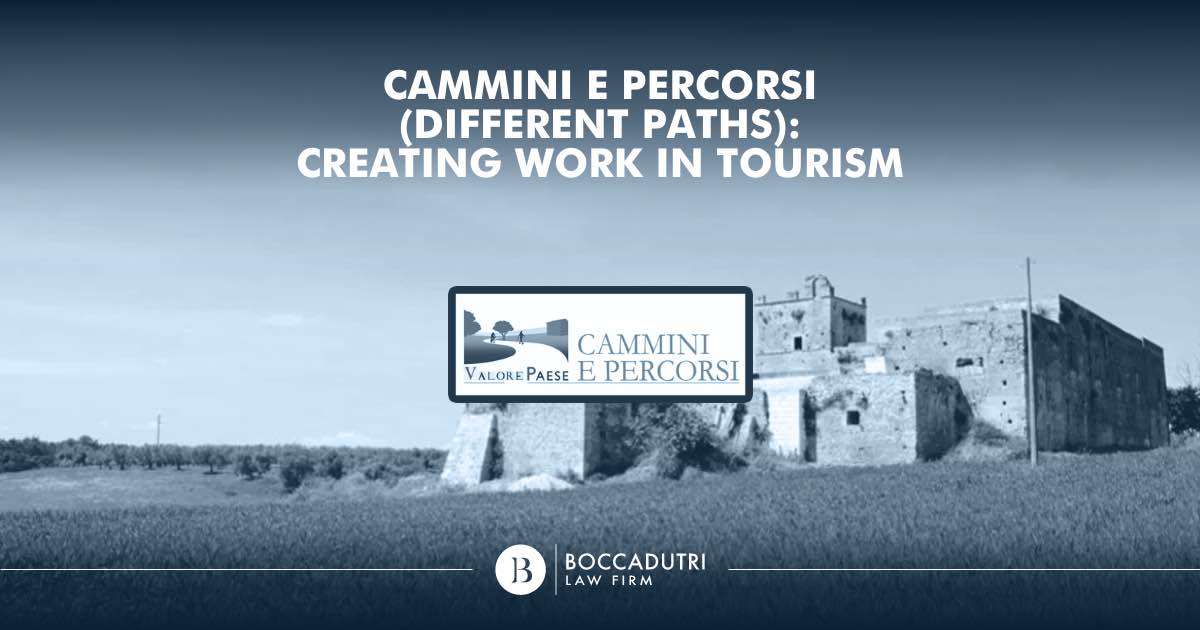 State Property lends assets to those who are willing to reinvent them and make them interesting to tourists. “Routes and paths” is presented as a way of boosting “slow tourism”, of the sort that means travelling by foot or on a bike to discover the most appealing places in the country.

The new project for valuing the territory’s resources is called “Cammini e percorsi” (Different paths). The announcement that the State Property Office, in collaboration with Mibact (Ministry of patrimony, cultural activities and tourism) and Mit (Ministry of infrastructure and transport), has promised on its website, is aimed at people who have a keen sense of entrepreneurship.

Although it has been specified that an announcement for under-40s is the main focus, having to pay attention to the age limit does not seem necessary.

It is enough to be a part of a cooperative or association/company whose members have, for the most part, not yet reached middle age to be able to be involved in the project with full membership.

The basic idea is to recover public property that has been abandoned along old historical or religious paths that can only be reached on foot or by bike, by “lending” them to private bodies.

The places to be taken into consideration should ideally represent must-see breaks for lovers of “slow travel”, which consists in throwing oneself into nature and travel without having to rush through long paths that are rich in history and religious tales.

To fill the void of tourism, that of welcoming, it would not make any sense to create new structures that can spoil the harmony of places, but to recover and promote something that already exists, even if it does so in a bad condition.

“Nothing is created, nothing is destroyed, everything transforms itself” (Lavoisier), it could happen by starting with a house and ending up as a hotel, by choosing an abandoned ruin to make into a welcoming inn.

One hundred and three opportunities across Italy

In total, the state property office has selected 103 facilities for promoting locations across Italy. Some of them belong to the state (forty three), some to territorial bodies (fifty) and some to Anas (ten) and are entrusted to have rights, through public notifications prepared for this summer, for nine years, plus nine…

There is also an extraordinary concession of fifty years for those operators that display that they can convert a resource that is important for the territory.

Who the ban is aimed at

Companies, cooperatives and associations, predominantly made up of people who are younger than forty, as laid out in DL 31.5.2014, n.83, Art Bonus, “Urgent means for the safeguarding of cultural property, the development of culture and the re-launch of tourism”, will be able to take part in the assignment, with modifications in Law no. 106 of 29/07/2014.

Buildings will be assigned in two ways: the access grant and the development grant.

The granting of access has a duration of nine years, by the end of which it will be available for renewal for another nine years, as laid out in DL Turismo.

The people that will be able to make a request in this case will be companies, cooperatives and associations and the final purpose of their project will be the promotion of the path in which the chosen building is situated.

Alternatively you can obtain the development grant, in which a real and proper partnership between public and private comes into play.

People that are targeted are entrepreneurs that are able to bring a more ambitious project that is rooted in the territory. In this case the State hopes to make it usable for fifty years.

The first step pending the announcement

The state property office website currently hosts a questionnaire aimed at gathering ideas, suggestions and applications for the management of the buildings.

Opening a free path to hotel projects, assistance centres, restaurants, recreation centres, cultural spaces, educational institutes, artisanal shops and spas. Everyone can have their own say regarding what ends up being plausible and attainable. Once the commitment has been made it will be involved in the successive phases.

The Mibact comes to the aid of entrepreneurs

The financing of the project is expected to be done by the Ministry for property and cultural activities and tourism to the tune of three million euros, subdivided into three bands.

The allocated money will be used to train and support the ones being entrusted with the property during the first two years of activity.

If the idea of the management of state property interests you and you need support to proceed, do not hesitate to contact our expert Corporate and Commercial Rights lawyers.