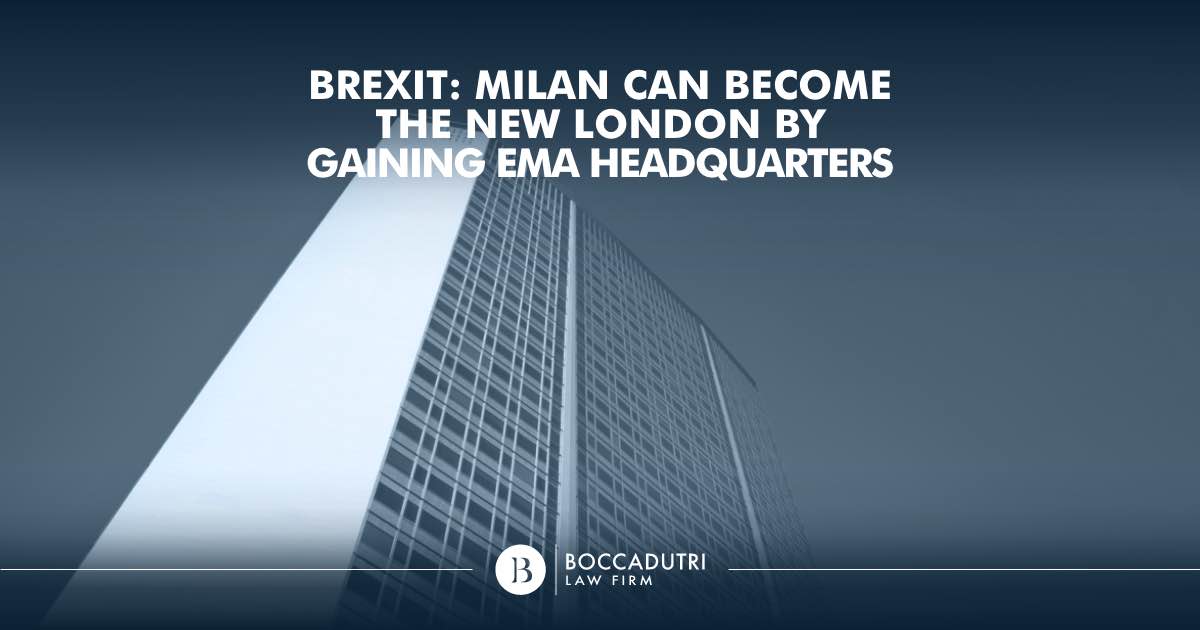 After the success of Expo, Milan is ready to accept London’s orphans and to become the future headquarters of the EMA, The European Agency for Medicines.

Milan’s candiacy for the headquarters of the EMA is official, the European Medicine Agency.
The headquarters will inevitably move from London come the beginning of March 2019, the final date for London’s exit from the European Union.
The EMA with more than 900 employees and with its annual budget reaching 300 million euros it is one of the biggest European agencies.
Connected with the EMA, every year hundreds of international events take place, that involve an average of 65,000 participants.
The city that hosts this organisation will have to be a modern, reliable, have infrastructure and transport available and large areas with many hotels and residential buildings as well as containing international schools.
Like Milan.
The capital of Lombardy left from the Expo 2015 with its head held high, having demostrated an excellent ability to organize all of the regional events, instituions and companies.

Furthermore, Milan is a metropolitan city subject to constant change, with many open contruction sites, it is efficient and prepared to host the employees of EMA along with their families.
Milan boasts three big airports, Linate, Malpensa and Orio Al Serio, a metropolitan line that covers the whole territory and efficient bus and tram routes.
Not to mention the prestigious universities and multicultural institutes.

The future headquarters of the EMA were discussed at a regional level in Lombardy and chose to allocate it to the institution il Palazzo Pirelli, with a well known skyscraper called Pirellone.

After three rounds of voting in the Council of the European Union, the city will be chosen.

The city of Milan has already made the first steps to becomeing a point of internationally noteworthy for those who want to do research and carry out innovative activities, thanks to the progect of “Human Technopole,” a hub dedicated to the life sciences.
It will interest those based in nutrition, genetics, genomics, health, biomedicine, and science data and decisions.
The new centre will start at the end of 2017 with 83 researchers and will be in an area of Expo of 674 square metres. But, with its completion planned for 2024 will be established in an area of 35 thousand square metres and will employ 1500 employees.

By the Human Technopole, an area that was occupied by Expo, the Watson Ibm will be there instead.
The purpose of the project is to analyse thousands of billions of pieces data, interpreting and using it in the most diverse fields, from health to industry, from finances to public amministration.

Whilst Sesto San Giovanni will become the city of health health. Two Milanese hospitals will be brought together, the neurologist Carlo Besta and the Institues of Tumours, with the intention of creating one reasearch centre and centre researching the cure for cancer.

The count down for Brexit has begun

The beginning of the count down for the exit of the United Kingdom from the European Union has begun.
In march of 2019 the UK will leave the aggreement of the free movement of people within the EU.
The end of the free movements of people coincides with the official end of negotiations, fixed for the 30th March 2019. The date was chosen because it is prior to the next European elections, that will take plae in May of that year.
It is not clear what regulations will the European citizens will be subjected to in London, in spite of the reassurances given by the Prime Minister Theresa May.
The conditions of “reciprical equality of treatment” proposed by the European Union, both sides have not as yet till been in complete aggreement, and this greatly worries all the sectors that employ Europen citizens.

Even the big banks are preparing to leave London

In March of 2019 when London is offically a foreign entity to the European Union, many will choose to leave the city. Recent news reveals that important groups of international banks, Bank of America, Citygroup, Morgan Stanley and Barclays just to name a few, are considering relocating their London headquarters in European cities.
There is talk of 40,000 employees being at risk of transfered or being let go.

The Boccadutri International law firm is available to those in need of clarification concerning Brexit and its implications. Our legal experts will be able to guide you in discovering solutions that are tailored specifically to your needs.

If you wish to be put into contact with a lawyer at our firm, contact us here.