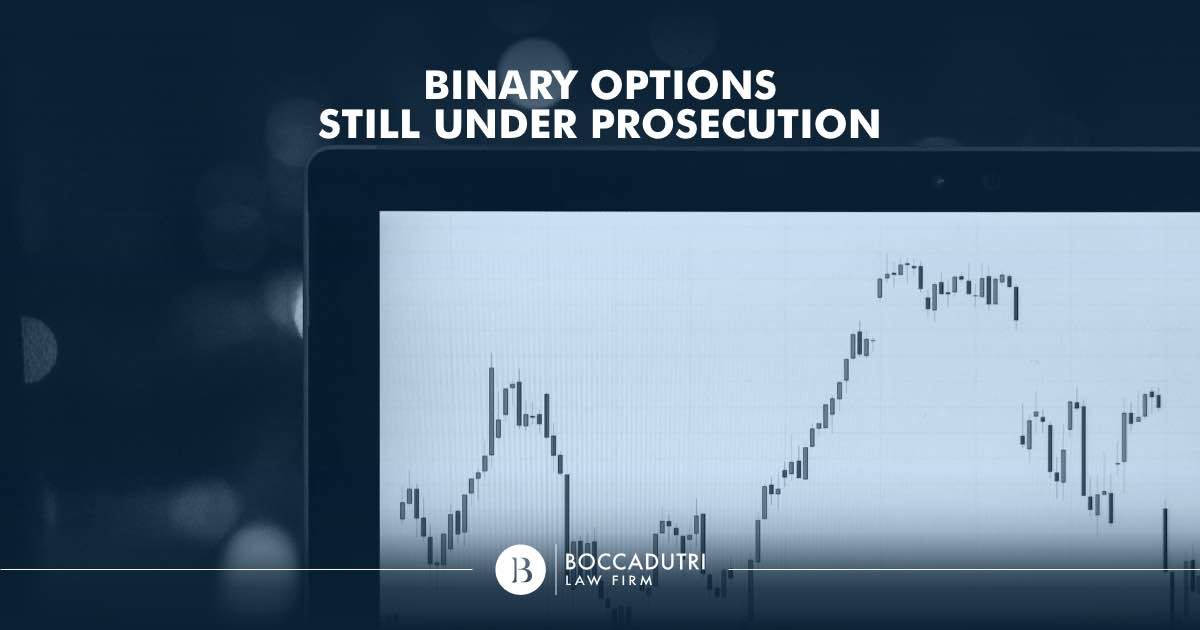 Canada accuses binary options, and in particular the activity of three brothers who, without even having a license, would have used a call center to convince thousands of people to invest.

Binary options is still under indictment. Although their trade has now been banned in many parts of the world, the echo of binary options-related activities has not yet died down. In Europe there is a ban on marketing, distribution or sale, in application of the Mifid II directives.

In Israel, the law against binary options has had a rather difficult path, given that it has affected the interests of large local companies. After a thriving decade, binary options were finally banned in October of 2017.

The three men allegedly operated online trading platforms that illegally sold binary options to Ontario investors (a situation the OSC has jurisdiction over the allegations made) and lied to investors, concealing the fact that they were calling from Israel. Among other things, those who called from the call center did not use their real names.

The companies run by the brothers were not registered with the OSC, therefore they had no authorization to operate.

The indictment against the activity of the Cartu brothers, albeit territorial and referring to illegal behavior committed in Canada, assumes a certain importance given that their business involved customers from all over the world, for which the one million Canadian dollars that they are accused of having acquired unduly accounts for only a very small part of what was pocketed in total: $233 million.

The companies operated through a call center based in Israel. The now closed facility was called Tracy PAI Management Limited (Tracy PAI).

From July 2013 to April 2017,  bank accounts of the UKTVM and Greymountain companies, attributable to the Israeli-Canadian brothers, received approximately $233 million from binary options investments from investors worldwide. Once invested, the money was unable to be withdrawn.

Boiler room: the work of the call center

Tracy PAI staff were hired, controlled and paid by the Cartu brothers to carry out a variety of commercial activities and promote trade within their companies.

The accusation against the call center employees is that of lying to potential investors, providing false names, titles, experiences and call locations. Among these condemnations,  OSC has denounced the three brothers’ for the fact that their profit margins depended on the loss of customers’ money.

The OSC has stated, in no uncertain terms, that the call center in Israel functioned as a “boiler room”, that is, a place where vendors work using unfair and dishonest sales tactics.

The call center was tasked with soliciting investors’ deposits for binary options trading and discouraging those who intended to withdraw their funds from their accounts.

OSC investigations have revealed the involvement of other companies: UKTVM Ltd. (UKTVM), founded in the United Kingdom, which processed payments for BeeOptions.com and Glenridgecapital.com, and Irish Greymountain Management, whose task was to acquire credit card payments for binary options companies.

GreyMountain Management Ltd. was founded in 2014 and went into liquidation after numerous warnings from financial market supervisors and an investigation into the company’s activities by Irish regulators.

The Cartu brothers tried to divert any connection between them and these associate companies, by using directors appointed ad hoc.

Currently, no criminal proceedings are underway for the Cartu brothers, but only a civil proceeding, with which the consequences would not result in prison but in the payment of sanctions for millions of dollars, the cessation of any type of trading in securities or derivatives, and a future ban on holding positions as directors or officers of a company or managers of investment funds.

The fate of Lee Elbaz, CEO of Yukom, was very different, who in August 2019 was sentenced to 22 years in prison by a federal judge, on charges of fraud and criminal association.

If you have been involved with these companies and want to be informed about any developments in the proceedings, do not hesitate to contact the Forex Litigation Department of the Boccadutri International Law Firm here.