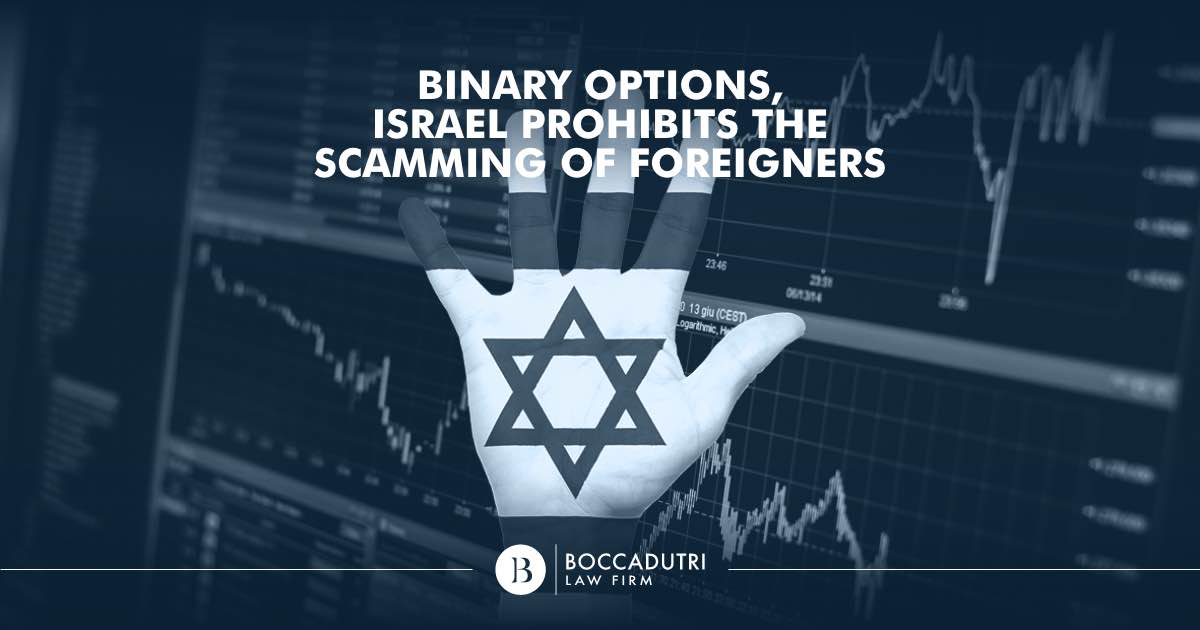 Israel prohibits the scamming of foreigners. Prison sentences for those infringing the new law on binary options.

The Israeli government has revealed its legal plan to definitively ban binary options from the Middle-Eastern country. Up to two years in prison can be expected for transgressors.

The new plan for the law banning Israeli companies and those brokers taking advantage of a licensce from the country, from trading binary options abroad will see heavy sanctions for transgressors. Sentences could mean up to two years jail time for those in breach of the law.

This law was promised at the last IOSCO (International Organization of Securities Commission) summit in Paris, 27th January, when Israel, its government and its supervisory bodies had been called to respond to the high concentration of fraudulent Israeli brokers, who have got away with it all over the world.

Also in January, during the State Control Committee, members of Knesset (the Israeli Parliament) and ISA (Israeli Securities Authority) had debated the problem and the legal proposition from that same meeting was signed by the ISA, the Ministero della Giustizia (Ministry of Justice) and the Procuratore Generale (Attorney General).

Some Israeli businesses have attracted continuous accusations of illegal practice and international condemnation in the last ten years.

There are also many sites considered fraudulent that use Israeli technology.

What the new binary options law will mean

Israel is currently working on a law prohibiting Israeli firms from trading binary options abroad. Business brokers with an Israeli licence will no longer be able to offer services to foreign clients.

The sentence for those in breach of the law could be imprisonment for up to two years.

If the law goes through in its current form, the right to veto – for other services, too – will be granted to the Israeli Treasury, depending on the situation, without having to wait for resolutions later.

The law will apply to those that manage online trading platforms selling binary options abroad or financial goods. It will regulate the Forex sector in general and will also address companies that work with CFD from Israel, dictating that they must obtain a license from the country from which the client originates to be able to operate.

In the detail of the law you can also read an attempt to stop the phenomenon of offshore jurisdiction.

Many countries do in fact offer “hospitality” to foreign companies, allowing them to operate with favourable fiscal systems and without checks.

It is easy to imagine how these conditions might attract fraudulent entities.

Even marketing should come back into the crosshairs of legislature, given the widespread call centres that can be found in Israel and which continually claim victims across the world, convincing naive investors to deposit sums that they will never see again into accounts of supposed certified brokers.

Despite the Israeli ban many platforms have continued to operate, mainly looking for investors in other countries.

The new law will now have to face a trial for approval.

The ISA had already achieved the ban on the trade of binary options to and from Israel, from March 2016.

Despite the ban, those who owned an Israeli licence were still allowed to offer their products abroad.

The consequence was a sequence of international condemnations brought before the Israeli authorities. This phenomenon heavily damaged Israel’s global image. The sector of binary options is held up as fraudulent by the whole world in the light of scams worth billions of dollars declared by victims across the world in the last ten years.

In January, a Canadian man took his own life after being defrauded by a company based in Israel.

According to a 2016 investigation by Finance Magnates, the sector of binary options contributes more than 1.25 billion dollars each year to the Israeli economy and employs more than five million people.

Concrete help offered by the law

Those who have had anything to do with fraudulent Israeli stock-brokers know what it means to put down their own money, complete transactions and to be able to withdraw neither the winnings nor even what remains in the account.
It is for these people that Boccadutri Law Firm always keeps up to date on current legislation so as to be able to offer all the support possible to recover the lost funds.

If you have lost money in suspicious transactions or if you have been illegally prevented from withdrawing it, do not hesitate to contact us.

You can consult our lawyers by filling in the application form here.