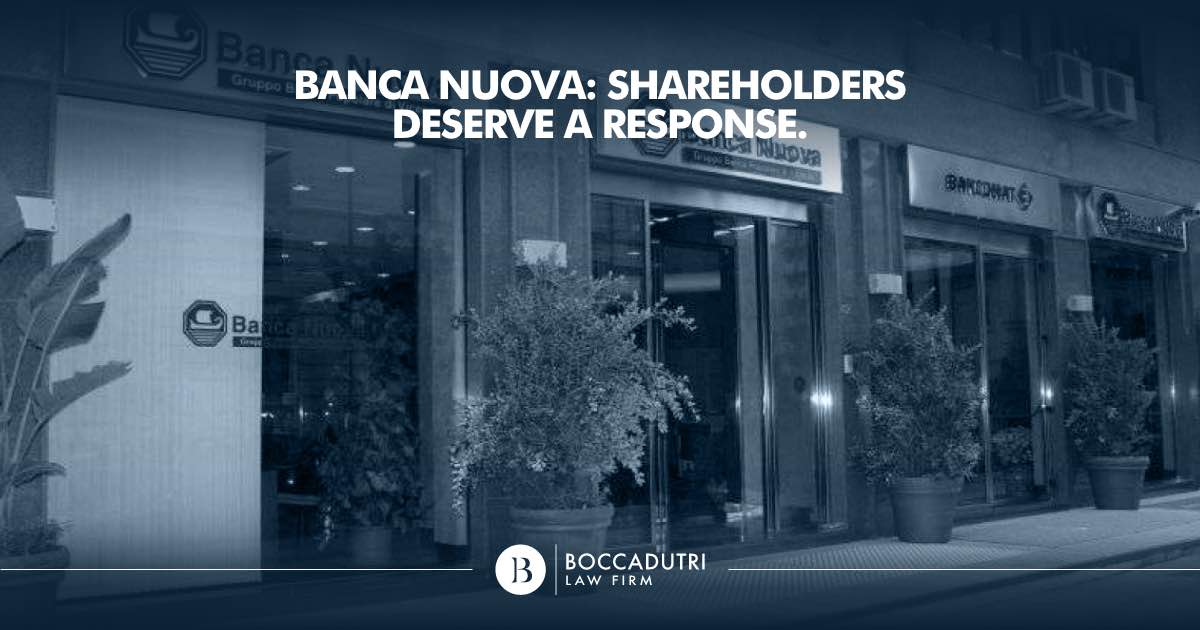 The accusation of exploitation at the top of Banca Nuova has been resolved with a conviction and two acquittals, but suspicions of false conduct towards its clients weigh heavily on the credit institution.

The acquittal concerns an event limited to two failed companies, but this is just the tip of the iceberg.
What really troubled consumers was the fall in the value of shares in Banca Popolare di Vicenza, which has total control of the Sicilian credit institution.
For buyers, this level of depreciation translated into a total loss of investments and savings.

To move away from the results of the current survey, what is of interest to shareholders is whether they will ever see their money again. It is still legal for an investment to go wrong, however the impression is that it was compromised even before being approved.
The ones that ignorant clients have acquired likely have no value, and therefore we would find ourselves facing fraudulent management of a share holding.

The issue came about when, under the directives of the European Central Bank, the Banca Popolare di Vicenza (owners of Banca Nuova) was seen to be forced to effect recapitalisation. It is at this point that one gets the feeling that shares have been put on sale for inflated prices.

In a nutshell: Banca Nuova, under directives from the Banca Popolare di Vicenza, sold shares at the modest figure of €62,50, the real value of which was no more than €0,10.

The fears of those who acquired these shares thinking they were making a shrewd investment were well founded. From current surveys, there are cases of loans obtained thanks solely to the contextual acquisition of the shares, or even the paradoxical situation of those who chose to enter into buying those shares, availing themselves with a loan from the same bank.

There are many people whose faith in the credit institution was badly placed. The record of victims is varied because there was not a reference target, every account holder had the opportunity to acquire a minimum share, however in some cases the loss reached considerable figures for entrepreneurs who had been convinced to invest thousands of euros.

A new name can be added to the list of bank institutions that have burned through money that was to be protected. If the Government had to decide to serve the interests of the Bank, as happened in the recent past with other credit institutions (namely Banca Etruria, Banca Marche, CariFerrara and CariChieti) the risk would be that clients that had been tricked would be left to deal with it themselves.

Given that experts on economics and finance have failed because they were led to do so by the heads of their banks, the only way to protect the interests of investors appears to be the legal route. To leave out future legal disputes in which Banca Nuova will be involved, nothing prohibits you from taking the first step of requesting repayment of the investment in a civil court.
Expert lawyers from Boccadutri International Law Firm are constantly monitoring the situation of the Banca Popolare di Vicenza and of Banca Nuova, and are able to assist whoever might have had something to do with the acquisition of the overvalued shares package.

If it is proven that the bank’s directive has left the share of Vicenza Popolare and continued to circulate even after their depreciation, the clients affected will be able, with full rights, to act against the bank in order to recover the amount lost.

Banca Nuova could soon be forced to reach into their own pocket instead of that of their clients, to return the ill-gotten gains. Once the can of worms has been opened, the size of what might come out is unpredictable, which is why you are advised to take so many precautions beforehand.

Do not hesitate to contact our lawyers to receive expert advice and to understand if, depending on your specific situation, there is a way of recovering your money. You can get in contact with them initially by filling in the request form here.